I Corinthians 13  (used at many weddings, but written to a congregation of Christ-followers)

Love is patient; love is kind; love is not envious or boastful or arrogant or rude. It does not insist on its own way; it is not irritable or resentful; it does not rejoice in wrongdoing, but rejoices in the truth. It bears all things, believes all things, hopes all things, endures all things. 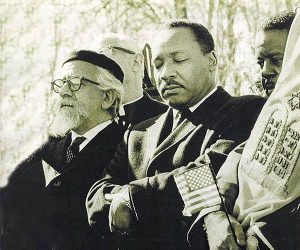 The Jewish Theologian Abraham Joshua Heschel once said this: “When I was young, I used to admire intelligent people; now that I am old, I admire kind people.”

The Apostle Paul could relate and would agree.

When Paul was young he admired the religious elite – the Pharisees who adhered to the strictest interpretation of the law of Moses. He wanted to be like them and so he became one. He admired the purity of it all – so much so – that he came to look down on those who weren’t as pure as him, especially this new sect within Judaism, the followers of Jesus of Nazareth. They were woefully misguided and impure. So he “fiercely persecuted” them, to use his phrase. He worked to have them eliminated.

Ironically Jesus appeared to him in a vision on the road to Damascus and Paul eventually became a Christ-follower. Paul was changed by love, transformed through grace, reborn through the Savior. You’d hardly recognize him if you knew him before. I wonder if his old Pharisee friends ever heard these famous words penned by Paul? If they did I’m sure they would have felt that he’d become “soft” and dreadfully idealistic. But for those who know Paul’s Savior it all makes sense.

“If I speak the language of the angels, but have not love I’m just a noisy gong or a clanging cymbal.

“If I understand every spiritual truth that God ever dreamed up, but don’t have love, I’m still nothing.

“If I can perform miracles or even make great sacrifices in religious devotion, but don’t do it in love, I’ve done nothing.

Then he describes this love he’s calling us to in easy to understand language. His writing shifts from poetry to prose.

“This love I’m talking about is first and foremost patient and it’s kind. It’s not boastful or arrogant. It doesn’t insist on its own way. It’s not irritable or resentful. It perseveres and endures. It’s not childish – there’s a maturity to it and a humility to it – we see in a mirror dimly.

And then in the Grand Finale of the chapter he expresses one of the key foundational truths of our religion – There are 3 great virtues – faith, hope & love, but the greatest of these is love. He moves from poetry to prose to pure conviction – the most important virtue that a person can practice is love.

“When I was young, I used to admire intelligent people; now that I am old, I admire kind people.”

I’d like to spend a few moments this morning and tell you about a person who agreed whole-heartedly with St. Paul and had one simple goal in her life – to live a life of love. In fact, she once said, “It is love alone that counts.” 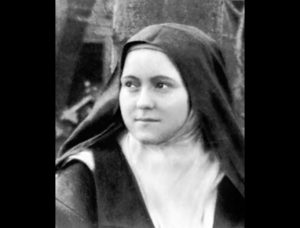 Her name is Therese of Lisieux. She was born in 1873 and died in 1897, which means she only lived to be 24 years old. Yet she was canonized in 1925. She is “St. Therese.”  Pope Pius XI made her the “star of his pontificate.” She was named a co-patron of France in 1944. The other co-patron? –  Joan of Arc. On October 19, 1997 Pope John Paul II declared her the thirty-third Doctor of the Church, the youngest person, and only the third woman, to be so honored.

St. Therese was a mystic whose only aims in life were to love Jesus and love others. And she wrote so beautifully about doing both.

“The science of loving, yes, that’s the only kind of science I want. I’d barter away everything I possess to win it.”

“O Jesus, my Love, at last I have found my vocation. My vocation is to love. In the heart of my Mother the Church, I will be the love.”

“I am glad to recognize that when we love God our heart expands, and we can give incomparably more tender love to those who are dear to us than when our love is selfish and barren

“When I act as charity bids, I have this feeling that it is Jesus who is acting in me; the closer my union with him, the greater my love for all the sisters without distinction.”

That’s one of the most basic and profound and beautiful insights you’ll ever hear – the closer our union with Christ, the greater our love for others. The closer we get to God – the source of all the love in the universe – the more love we have for others.

I first came across St. Therese in the writings of Stephanie Paulsell of the Harvard Divinity School. She writes that Therese entered a Carmelite monastery at the age of 15.  Nine years later she died of tuberculosis.  She became famous through her autobiography and her letters for what she called her “little way” to God. Paulsell writes:

Thérèse’s “little way” was a modest approach to the great task of cultivating holiness. In her ordinary interactions with family and community, she tried to find opportunities to cultivate love. When her tired and cranky father scolded her on Christmas Eve, she resisted the impulse to cry and felt charity enter her soul. When she heard that a criminal was to be executed, she devoted herself to praying that he would turn to God in the end. When she was bent over the laundry trough in the convent and the nun next to her kept splashing her with dirty water, she offered up her aggravation in love to Jesus. “My dear Mother,” she wrote to her prioress (the nun in charge of the priory) about this episode, “you can see that I am a very little soul and that I can offer God only very little things.”

St. Therese used every opportunity she could find to cultivate love. And she didn’t feel that her actions had to be huge and dramatic, just simple love – from God’s heart into her heart and out to others. 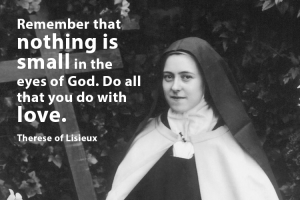 “I do not have any other means to prove my love to you, but to throw flowers, that is, to let no little sacrifice, no look, no word pass, to take advantage of all the littlest of things and to do them out of love.”

“Little things done out of love are those that charm the Heart of Christ… On the contrary, the most brilliant deeds, when done without love, are but nothingness.”

“You know well enough that Our Lord does not look so much at the greatness of our actions, nor even at their difficulty, but at the love with which we do them.

“A word or a smile is often enough to put fresh life in a despondent soul.”

The Jewish Theologian Martin Buber believed that, “God exists in the space between human beings. God isn’t found in people, but rather in that space between, where two people are present for one another, in relationship.” 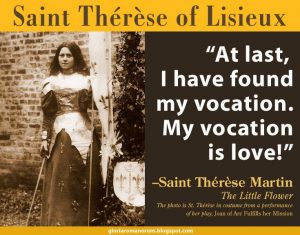 There’s one more thing I’d like to tell you about Therese of Lisieux.

On the night before Good Friday in 1896, Thérèse had a coughing fit. When she awoke the next morning – I won’t describe what happened – but she knew that she had begun to die. At first she was filled with joy at the thought of being with God in heaven. But by Easter Sunday that joy was gone, and it never returned. She described it like living in a country upon which an impenetrable fog had settled. As hard as she tried she could not recover the joyful confidence she had had in God’s love and care and promises. But even with this lack of joy and the deep faith she once had, she kept on following her little way.

“While I do not have the joy of faith, I am trying to carry out its works,” she wrote. She kept praying for others, kept trying to make her life an act of love. She taught herself how to keep loving even as she suffered and doubted. She lived for over a year in this state of doubt and despondency, yet she continued in her ‘Little Way,” striving every day to cultivate love with everyone she met.

As I mentioned she died of tuberculosis at the age of 24, but in the 2000 years of the Roman Catholic Church, she is one of only 23 individuals to be named a, “Doctor of the Church.” Not bad for someone who merely sought the “little way” of love every day.

I’ll close with these words from St. Therese. It’s an invitation to a deeper relationship with her Beloved:

“Do you realize that Jesus is there

in the tabernacle expressly for you – for you alone?

He burns with the desire to come into your heart…

don’t listen to the demon, laugh at him, and go without fear

to receive the Jesus of peace and love…” 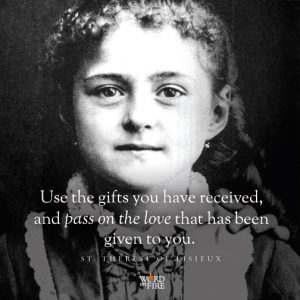