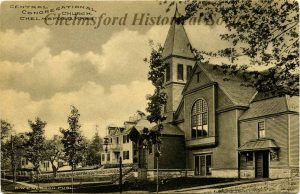 During January 1876, a group of twenty Chelmsford Congregationalists met at the Winn home on Academy Street and took steps that led to the establishment of this church. Less than a month later, Articles of Faith and a covenant were adopted.

On April 13, 1876, an Ecclesiastical Council, comprised of surrounding community clergymen, officially recognized this new church, to be known as The Central Congregational Church in Chelmsford.

To begin with, guest ministers were utilized, until June 1877 when Rev. Frank M. Sprague consented to serve both this church and the Congregational Church in Carlisle. His starting salary was $800 a year. 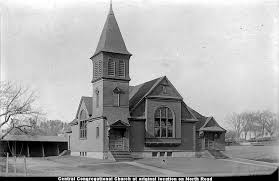 For twelve years the congregation, without a home of their own, continued to meet regularly in either the (Central) Baptist Church (now Journey of the Common), the Unitarian Meeting House, Town Hall, or an elementary schoolhouse.

Incorporation, by a special act of the legislature, took place in May 1886. In July 1887, the need for having a building of our own was determined and a committee was formed. There were 54 members at this time.

Land on North Road was given by the Winn family. The church was built under the careful supervision of Samuel Hagerman, a church member. It was completed and dedicated on May 1888 at a cost of $5,199.43. 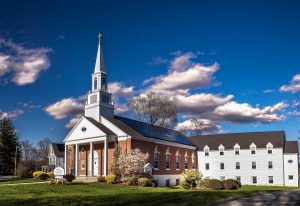 Following World War II, the parish list had grown into the mid-200’s and plans were again made to build a larger church facing onto Worthen Street. Groundbreaking took place in April 1959 and the cornerstone was laid the following September. Then on May 20, 1960, with the membership now 404, the present colonial-style church was dedicated with a service, reception, and open house. Cost for this building was $251,000. The old 1888 church building was then razed, after 72 years of continual use.

Buildings, of course, tell only a small part of the story of any church; because at its heart, the church is people. Their faith, worship, fellowship, and loving service to the community and the world are the real story of a church, especially Central Congregational Church in Chelmsford!

A Community of Faith, Hope, and Love,

Growing through Worship and Service!