CCC is undergoing a Capital Campaign to raise funds to address projects and improvements to our facilities as prioritized by the congregation. 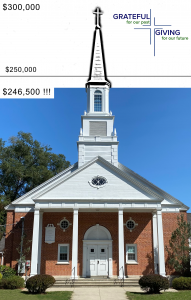 Your Pledge is important, no matter the amount. The Capital Campaign is a 3-year campaign and donations can be given over time.

The chart below illustrates how different pledge amounts can be fulfilled over the 3-year campaign.

The Council has approved the following people to serve on that committee:

The committee has begun organizing to mount the Capital Fundraising Campaign in the fall of 2022. Dick Papenfuss is the Chair of the committee and Sandy Lamplough is the Secretary.

Work is underway to establish a timeline, theme, and the mechanics for conducting the fundraising campaign.

If you have any questions about the Capital Fundraising Campaign, feel free to reach out to any of the committee members.

For more information about the phases of this Capital Campaign, please visit these pages: