The Book of Acts was written by Luke.

Luke was not one of the 12 disciples. He was an early convert to Christianity and became a travelling companion to St. Paul, and because of that he would have spent a great deal of time with the original disciples, also called the apostles. Luke wrote the Gospel of Luke as well as the Book of Acts. The Acts of the Apostles, as it’s called, is really Luke, Vol. II.

1In the first book, Theophilus, I wrote about all that Jesus did and taught from the beginning 2until the day when he was taken up to heaven, after giving instructions through the Holy Spirit to the apostles whom he had chosen. 3After his suffering he presented himself alive to them by many convincing proofs, appearing to them during forty days and speaking about the kingdom of God. 4While staying with them, he ordered them not to leave Jerusalem, but to wait there for the promise of the Father. “This,” he said, “is what you have heard from me; 5for John baptized with water, but you will be baptized with the Holy Spirit not many days from now.”

6So when they had come together, they asked him, “Lord, is this the time when you will restore the kingdom to Israel?” 7He replied, “It is not for you to know the times or periods that the Father has set by his own authority. 8But you will receive power when the Holy Spirit has come upon you; and you will be my witnesses in Jerusalem, in all Judea and Samaria, and to the ends of the earth.” 9When he had said this, as they were watching, he was lifted up, and a cloud took him out of their sight.10While he was going and they were gazing up toward heaven, suddenly two men in white robes stood by them. 11They said, “Men of Galilee, why do you stand looking up toward heaven? This Jesus, who has been taken up from you into heaven, will come in the same way as you saw him go into heaven.”

Luke starts out, “in my first book Theophilus I wrote about all that Jesus did and taught from the beginning.”

One other theory is that Theophilus is a symbolic name for all Christians everywhere, because Theophilus means, “Friend of God.”  (Theo = God,  Phileo = friend)

Maybe Luke is writing to all Christians everywhere, in all places, for all time? “I’m writing to all God’s friends. I want you to know what took place, what Jesus said and did, and what happened after he returned to Heaven.” Luke’s writing for us, to help us become better friends of God.

Vs. 3  After his suffering he (Jesus) presented himself alive to them by many convincing proofs, appearing to them during forty days and speaking about the kingdom of God.

Following his resurrection, Jesus had 40 more amazing days with his followers. We don’t know a lot about those 40 days. Luke says, “He presented himself alive to them by many convincing proofs.” The Apostle Paul tells us that during this time Jesus appeared to over 500 people at one time,  (I Cor. 15:6) 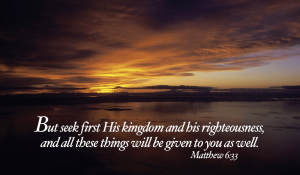 Luke says that over those 40 days Jesus reviewed his most important teachings with them – “The Kingdom of God.”  That was his favorite topic!  Think about how many of Jesus’ teachings began, “The Kingdom of God is like . . . .”  – a mustard seed, a treasure buried in a field, leaven that permeates the bread,

Jesus reviewed his teachings with them because the message would now be in their hands. He was handing over his preaching & teaching ministry to them.  What an act of faith that was for Jesus! 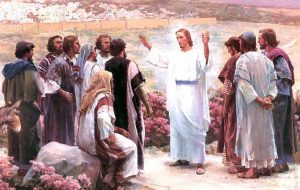 There is No Other Plan.

When Jesus returned to heaven following his mission on earth the angels gathered round. He told them about being born in Bethlehem, about teaching the ways of the Kingdom, about the miracles, his atoning death and victorious resurrection.

Gabriel then asked, “What will happen now?”

Jesus told him, “I’ve left the work in the hands of a small band of disciples, fishermen mostly. They will share the message. They will carry on my work.”

Gabriel then asked, “What if that doesn’t work? What will be the plan then?”

Jesus replied, “There is no other plan.”

This passage is when that plan was enacted, where the ministry of Christ was handed over to his disciples.

But first he commanded them to wait in Jerusalem for the Promise of the Father, the promised Holy Spirit. “Wait for what God will send you – the Holy Spirit. Soon you’ll be baptized – immersed, bathed – in the Spirit.” 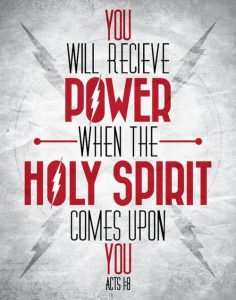 That’s what we’ll celebrate next week, the gift of the Holy Spirit on the day of Pentecost.

Isaiah the Prophet had it right when he said, “They that wait upon the Lord shall renew their strength.”  (Is. 40:31)

That’s the message Jesus was giving his followers – “My entire ministry is about to be handed over to you – but before you begin it, wait for the Holy Spirit to come.

Illustration. A very saintly woman was once asked by a younger woman in her church, “It is best to have your daily prayer time in the morning or in the evening?”

“Either one is fine,” she replied, “but think about this: is it more important to make sure your car is filled up with gas at the start of the trip, or at the end?”

And then Luke records the last words Jesus ever spoke on earth: 8But you will receive power when the Holy Spirit has come upon you; and you will be my witnesses in Jerusalem, in all Judea and Samaria, and to the ends of the earth.”

“You will be my witnesses.”

In Jerusalem where they were, in Judea (the surrounding region), in Samaria (the next region beyond Judea) and to the ends of the earth. Almost sounds like a strategy. It’s also exactly what happened. 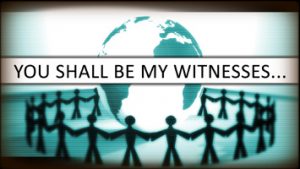 But what I’d like to focus on is this: “You will be my witnesses.”

It’s of course a legal term. 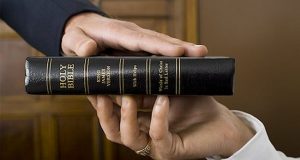 Witnesses take the stand and what do they do?

That’s a very helpful image for sharing our faith and discussing faith issues with others, isn’t it? Our job is not to be intensely persuasive or overwhelmingly convincing, while rebuffing all arguments and objections. Our task is simply to tell what we’ve experienced.

“My relationship with God gives me hope & joy, comfort & peace, purpose and strength. I find Jesus Christ to be the most compelling, most loving person who ever lived. And to me, he’s not just an historical figure from the past, he’s a living presence in my life. And for me living for him is the most meaningful and challenging life I could ever imagine.” 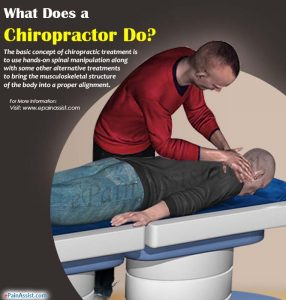 Many years ago, I played tennis with a group of guys, one of whom was a chiropractor. I figured if I got injured, he’d just fix me up right then & there.

I had never been to a chiropractor, never knew one, never met one. I also went to a college known for its excellent pre-med program, and I’d heard folks express skepticism about whatever it is that chiropractors do. So, I asked my tennis partner,

“How did you get interested in chiropractic medicine, do you call it medicine, because you don’t use medicine right?”   (my question skillfully revealed my ignorance and my skepticism)

He then told me his story. When he was a child he had terrible allergies, and his parents took him to every specialist they could find. But nothing worked. Then out of desperation, they went to a local chiropractor, who proceeded to cure him of his allergies.

“I’ve never had a problem since.  And so we started going to this chiropractor for many things. And I’ve loved it ever since.”

He witnessed to me about chiropractic medicine. He didn’t try to convince me or persuade me. He just told me his personal experience, and I couldn’t argue with that. I couldn’t say, “No, that didn’t happen to you. That’s not true. That proves nothing.”

Personal experience is powerful, disarming and inviting. It tends to lead to curiosity and discovery, instead of debate and argument.

“You shall be my witnesses.”

The other thing I like about the image is the other meaning of a being a witness. It’s the non-legal meaning of the word. Some people are witnesses for things without even saying a word. Their lives are a witness to very important truths.

Ex. Francisco is a witness to the power and beauty of classical music. He & Taide are also witnesses for what it looks like when music gets ahold of your soul!

Ex. Steve mentioned Olivia Hungate inviting 3 of her friends to join the God Squad on service projects. Olivia is a witness to a faith that serves the poor and invites others to serve along with us! Imagine what those invitations must have sounded like:

“We’re going to Boston to listen to homeless people tell their stories and take us around town to show us where they sometimes sleep and then take us inside the smelliest shelter you could ever imagine. Then we’ll sleep on the marble floor of the church and get up at 6:30 am to make 250 sandwiches to serve to the homeless. It’ll be fun!” 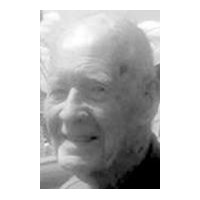 Ex. I did a funeral on Friday for a man named Ira Goding. Mr. Goding attended CCC years ago. He walked every day of his life. Always took the stairs Drank lots of water. Laughed a lot and did all he could to help others. Ira died at age 107.

His life is a witness to healthy, vibrant living.

May our lives be a witness to others of healthy, holy vibrant living. 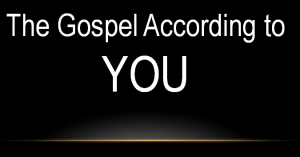 Let me close with a poem entitled, The Gospel According to You.

The Gospel According to You

The most beautiful story was given to all,
Written down many long years ago
By Matthew and Mark, by Luke and by John,
Of Christ and His mission below.

And you write a gospel, a chapter a day,
By your deeds, whether faithless or true;
So as others read it, what do they think
Of the Gospel according to you?

It’s a wonderful story, the Gospel of love,
As it shines with the Christlight divine.
Oh, that its truth might be told once again
In the story of your life and mine.

You’re writing each moment a letter to all:
Take care that the writing is true.
It’s the only Gospel some people may ever read –
The Gospel according to you.

Our goal this week is to be witness to the truth of God, and to the love of Christ.

Live as if your name was Theophilus.

Live as a Friend of God!

And as you do, the Grace of our Lord Jesus Christ, the Love of God, and the Fellowship and Strength of the Holy Spirit will be yours this day and forever. Amen.