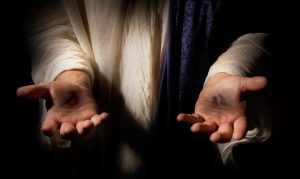 But Thomas (who was called the Twin), one of the twelve, was not with them when Jesus came. So the other disciples told him, “We have seen the Lord.” But he said to them, “Unless I see the mark of the nails in his hands, and put my finger in the mark of the nails and my hand in his side, I will not believe.”

A week later his disciples were again in the house, and Thomas was with them. Although the doors were shut, Jesus came and stood among them and said, “Peace be with you.”  Then he said to Thomas, “Put your finger here and see my hands. Reach out your hand and put it in my side. Do not doubt but believe.” Thomas answered him, “My Lord and my God!”  Jesus said to him, “Have you believed because you have seen me? Blessed are those who have not seen and yet have come to believe.”

This message is entitled, “Scars.”

Let me ask you a question: Why did Jesus keep his scars following his resurrection?

Why did the one who conquered death still carry the marks of that death on his body? – the scars from the nails that pierced his hands and feet and held him on the Cross, as well as the scar in his side where the spear went in. Why would the King of Kings, the Messiah, our Glorious Savior allow himself to still bear the marks of a common criminal, marks administered by Imperial Rome who used crucifixion to rule with an iron fist. Over the centuries Rome crucified tens of thousands to intimidate, strike fear of punishment, and keep law & order.

It reminds me of King George’s line from Hamilton, “I’ll send a fully armed battalion to remind you of my love.”

Why wouldn’t the Savior of the World remove the marks of Rome? He gave sight to the blind, healed the lame, cast out demons and even raised the dead – removing those scars would have been his easiest miracle.

So, if his body was changed, why didn’t he remove the Scars?   I certainly would have, if I had the power. Who would want such a reminder? Who would want to see the scars every time you looked down at your hands? This is one of those details in the Bible that you say to yourself, if this was a work of fiction that detail is the sign of a a brilliant writer. – it’s such a powerful image, and unexplained The Victorious, Risen Christ keeps his scars. The Disciples were not skilled writers by any means, they were fishermen mostly – they simply recorded what they saw. I’ll bet they even said to themselves that line we use today: “You can’t make this stuff up!”   – he still has the scars! 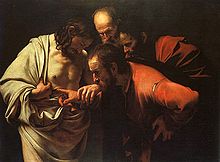 You heard the account of Doubting Thomas – he wouldn’t believe unless he saw the scars where the nails and spear went in. “Unless I see the nail marks in his hands and put my finger where the nails were, and put my hand into his side, I will not believe.”  (John 20:28)

John is not the only Gospel to mention this. In Luke 24, Jesus appears to the disciples. The text says,  “They were startled and frightened, thinking they saw a ghost.  He said to them, “Why are you troubled, and why do doubts rise in your minds? Look at my hands and my feet. It is I myself! Touch me and see; a ghost does not have flesh and bones, as you see I have.” When he had said this, he showed them his hands and feet (Luke 24:37-40). Jesus wanted to quickly demonstrate to the disciples that it’s really him, so, “he showed them his hands and feet” (vs 40). What was he showing them? The scars. The scars proved it was him. That’s one explanation for why he kept the scars. It was proof – proof that the one who died on the Cross was the same one who now stood before them alive. The scars were needed to show them that it really was Jesus – alive again. But I think there may be more to it than that.

In the Book of Revelation we get a number of glimpses of heaven, filled with symbolism – and Jesus is seen as a “Lamb who was slain.” “Worthy is the Lamb who was slain.” Rev. 5:6 – Then I saw a Lamb, looking as if it had been slain, standing at the center of the throne. The phrase, “looking as if it had been slain” has led many to conclude or at least speculate that Jesus even bears the scars of his crucifixion in heaven. He’s the only one in heaven with scars, and those scars tell a story.

Scars do that, don’t they? They tell stories. Scars from an operation often tell the story of an injury, a surgery, and recovery. 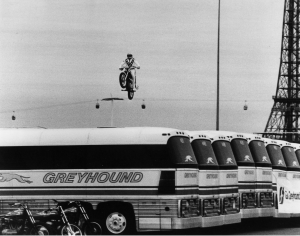 Illustration. I remember years ago watching an interview with Evil Knievel, the dare-devil that used to do crazy jumps on his motorcycle. During this one interview he showed the television host a number of his scars, and told the story behind each one. “This was from the time I jumped over 21 city busses on my motorcycle. “Unfortunately, there were 23 busses lined up and I didn’t make it over the last two.”  Every scar had a story.

Illustration. An orphaned boy was living with his grandmother when their house caught fire. The grandmother, trying to get upstairs to rescue the boy, tragically died in fire and smoke. The boy’s cries for help were finally answered by a man who climbed an iron drain pipe and came down with the boy hanging tightly to his neck. Several weeks later, a public hearing was held to determine who would receive custody of the child. A farmer, a teacher, and the town’s wealthiest citizen all gave the reasons they felt they should be chosen to provide the boy with a home. As they talked, the child’s eyes remained focused on the floor.

Then a stranger walked to the front and slowly took his hands from his pockets, revealing scars on them. As the crowd gasped, the boy cried out in recognition.

This was the man who had saved his life and whose hands had been burned when he climbed the hot pipe. With a leap, the boy threw his arms around the man’s neck and held on for dear life once again. The other men silently walked away, leaving the boy and his rescuer alone. Those marred hands had settled the issue. The scars told the story of love, of love in action. That love was powerful and bonding. It brought them closer than words can even describe.

May the scars of Jesus do the same thing for us. May they draw us to him and bind us to him. Amen.

Why do you think Jesus kept his scars?