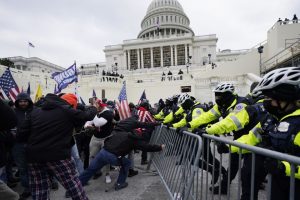 I think I’ve told you before about the annual meeting of the Russian Orthodox Church, held in 1917. The big issue at that meeting was the liturgical color for Advent – should it be purple or blue? The Kingdom of God doesn’t exactly rise & fall with this decision. But what else was going on in Russian in 1917?  The Bolshevik Revolution.

As people of faith, we can’t ignore the events and issues of our day. We have to talk about them and try to view them through the lens of scripture, faith, and discipleship. If our faith doesn’t have anything to say about the big issues of our day, one might ask, what good is it?

And so I offer you this morning a message entitled, What I Think Jesus might say about Wednesday’s Assault on the Capitol.

I would highlight words, “think” and “might.” What I think he might say. I have no direct revelation on this, but I will base my remarks on words he actually did say. My words on this subject are not authoritative . . . but his are.

What I Think Jesus Might Say about Wednesday’s Assault on the Capitol.

This was drilled into us in seminary. Don’t allow any one political party, any one movement, or any one person to coop your faith and your life. The Kingdom of God is too big, too expansive for that!

That crowd – or at least the aggressive and violent members of it believed that Donald Trump is the Savior. Wednesday’s event was called, “The March to Save  America.” Who’s going to “save America?” The Savior, Donald Trump – and he deserves blind obedience and fanatical devotion, and whatever it takes to achieve his ends, even if it means desecrating the most important symbol of democracy on this planet!

I’m not saying that every Trump supporter views him as the Savior, but many who were there on Wednesday sure did. I’m sure you heard some of the interviews that I did, with people on their way to the Capitol Building. They were saying things like, “Donald Trump’s not done. He’s got a plan. Something big’s gonna happen today. He’s got more up his sleeve.” They believed there were ushering in the Second Coming . . I mean, a second term.

But Jesus Christ is our Savior!  He is the Way, the Truth and the Life, and not any one human being!

Proverbs 12:1 – Whoever loves instruction loves knowledge; but he who hates correction is stupid. (I double-checked – most translations use the word “stupid.”)

Wise people know that they don’t know it all, and they seek out others’ opinion, feedback, advice, and correction. And the more responsibility a person has, the more they need the counsel of others.

Imagine if President Trump had shared the idea of that rally and that march with folks who would challenge him.

“Mr. President, are you sure you want to excite the crowd and tell them, “to show strength,”  “fight like hell,” and “never give up” – and then send them to the steps of the Capitol?

“Are you sure you want to cause a scene (at best) on the day that Congress is doing a duty prescribed by the Constitution to be done on that very day, January 6? You took an oath to protect and defend the constitution, Mr. President. Remember?”

I doubt if anyone spoke bluntly to President Trump, and even if someone did, it’s not unrealistic to think that he probably wouldn’t have listened anyway.

Proverbs 12:1 – Whoever loves instruction loves knowledge; but he who hates correction is” –bound to do some stupid and even dangerous things.

I think he’d quote a passage that his younger brother James wrote: The tongue is a small part of the body, but it makes great boasts. Consider what a great forest is set on fire by a small spark. The tongue also is a fire, a world of evil among the parts of the body. It corrupts the whole body, sets the whole course of one’s life on fire, and is itself set on fire by hell. It is a restless evil, full of deadly poison. (James 3:5-6, 8)

Jesus might remind us that he knows a thing or two about mob violence, when on Good Friday the mob was riled up and shouted, “Crucify Him! Crucify Him!”

And that leads me to one more point.

If Wednesday’s assault demonstrated one thing – it’s the destructive power of hate.

When people hate they can justify anything – and they can treat people in unconscionable ways.

Imagine just for a second if they had found Pence and Pelosi . . .

These are domestic terrorists, what the Justice Department has been warning us about all last year. These are folks who have been “radicalized,” just like Islamic terrorists, radicalized by their hatred. Think about the reasoning behind their apparently plans: Let’s harm Mike Pence and Nancy Pelosi in order to overturn an election for president of the United States of America. In what world does that make any sense at all? Only in a world a hate.

Hatred is dehumanizing and destructive. That’s why Jesus told us to run from hate and embrace love. Jesus taught us to love even those who strongly oppose us – our “enemies” – those we strongly disagree with, those we can’t understand, those whose worldviews seem diametrically opposed to ours.

Jesus modeled this, by the way, in choosing Matthew the Tax Collector and Simon the Zealot to be his disciples. Zealots were an insurrectionist movement that believed in the violent overthrow of Rome – and who was Matthew collecting taxes for? You guessed it, Rome! They would have been mortal enemies! And Jesus said to both of them, “Come, Follow Me.”

Jesus’ Band of Brothers were not all alike. I suspect that was on purpose so he could teach them how to love.

Jesus still wants to teach us how to love.

So how does Jesus want us to respond to Wednesday’s assault on democracy?

I don’t know for sure, but I am certain it involves love.

The police and the courts will carry out punishments and justice, but our calling is to love.

If I could give us an assignment this week it would be to reach out to someone whose views are different or even opposite of yours. See how they’re doing. (the Trump supporters I’ve spoken with are heart-broken)

Lord Jesus, thank you for your words, your teachings, your life, and your love. Teach us to love like you love. Stretch us to love even those we can’t even begin to understand sometimes. Give us open hears and open minds to listen for what’s behind the anger and the protests. Heal our nation, Lord, and use us in that effort. In your precious name we pray. Amen. 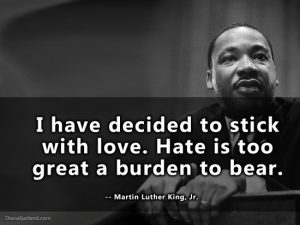