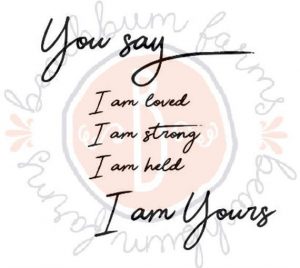 John 11:17-27
When Jesus arrived, he found that Lazarus had already been in the tomb four days. Now Bethany was near Jerusalem, some two miles away, and many of the Jews had come to Martha and Mary to console them about their brother. When Martha heard that Jesus was coming, she went and met him, while Mary stayed at home. Martha said to Jesus, “Lord, if you had been here, my brother would not have died. But even now I know that God will give you whatever you ask of him.” Jesus said to her, “Your brother will rise again.” Martha said to him, “I know that he will rise again in the resurrection on the last day.” Jesus said to her, “I am the resurrection and the life. Those who believe in me, even though they die, will live, and everyone who lives and believes in me will never die. Do you believe this?” She said to him, “Yes, Lord, I believe that you are the Messiah, the Son of God, the one coming into the world.”

One of the church’s I served held a Colonial Worship Service every other year to honor the church’s historic roots (I had mixed feelings about this, as it sometimes was more of a show than a worship service). A number of folks dressed up in colonial costumes, and we re-enacted the type of worship service they would have held long ago. I’d even preach/read an old Puritan preacher’s sermon, many of which were quite practical, as they helped lay a foundation for new villages in a new land. 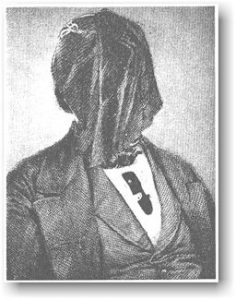 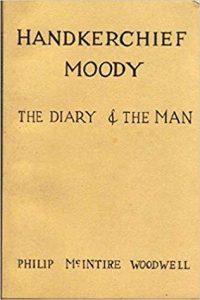 One of the characters always portrayed on these Sundays was Joseph “Handkerchief” Moody. Joseph was the son of the long-time colonial pastor, Samual Moody. Joseph got his nickname, “Handkerchief,” because he sometimes appeared in public wearing a dark veil covering his face. (Nathanial Hawthorne loosely utilized Joseph in his story, “The Minister’s Dark Veil.”)

As a child Joseph was involved in a fatal gun accident, killing a little boy in town, one of his best friends. Joseph lived with the guilt of this incident all his life. In his moments of deep depression, he didn’t want to show his face around town. Thus, the veil.

In the 1740s, the greatest preacher of the Colonial era came to town – George Whitefield. Whitefield was an incredible orator. People came from miles and miles around to hear him. He preached multiple times a day, all up and down the colonies. Well, when he came to York, Rev. Samuel Moody asked Whitefield if he’d spend some time with his son, Joseph, hoping Whitefield could reach the young man and give him some relief in the Christian message of forgiveness. Whitefield did his best, listening, sharing and praying with Joseph, but to no avail. As Whitefield put it, “He has trouble believing that the promises of God apply to him.”

He had trouble believing that the promises of God applied to him.

Can you relate to that?

I’ll bet you can. I certainly can.

You know the promises of God apply to the people sitting all around you. You could probably give them an encouraging talk about that if you had to. But sometimes the hardest person to convince is yourself.

Can you apply the promises of God to the person who stares back at you in the mirror? 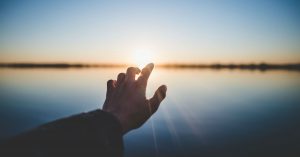 In John 11, Mary & Martha were about to learn that the promises of God applied to them and their brother, Lazarus. They had sent word to Jesus – “Your friend Lazarus is sick.” But Jesus was delayed in coming and Lazarus died. When Jesus arrived they said to him,

“If only you had been here our brother would not have died.”

“Your brother will rise again,” he replied.

“I know he will,” said Martha, “in the Resurrection on the last day.”

“I, standing before you, am the Resurrection and the life, those who believe in me, even though they die, they shall live” said Jesus.

In other words, the promises of God are for today! They’re for you – Martha, Mary, Lazarus! – today! 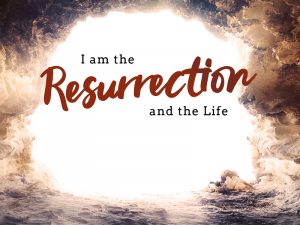 For in Jesus Christ every one of God’s promises is a “Yes.”

Do you believe that God’s promises are a ‘Yes’ for you?

“Yes, I will strengthen you & uphold you!”

“Yes, you are saved by grace, not works!”

“Yes, you are forgiven!”

Do you believe that God’s promises are for you? 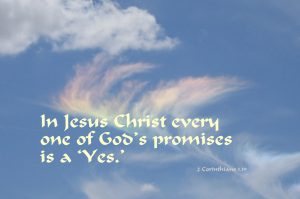 Some years ago I had a parishioner named Mrs. Lord. Mrs. Lord was fairly new to the church, and I did not know her very well. I did know that her previous church had been the Unitarian Church in a nearby town.

Mrs. Lord lived a long and fruitful life. I got to know her much better as she approached the end of her earthly life. She was hospitalized for quite a while. A week or two before she passed I asked her this question: “Are you afraid?”   It’s only natural to have some anxiety at a time like that. With a clear but gentle voice and deep conviction in her eyes, she said,

“No, I’m not afraid. I was taught to trust what Jesus said.”

“I was taught to trust what Jesus said.”

Mrs. Lord believed that the promises of God were true, and they applied to her. 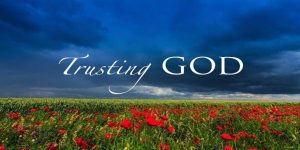 A few years ago I read of a study on teens and their self-esteem. The study found that there was a strong and natural correlation between how teens felt about themselves and how those who were most important to them felt about them.

This makes sense of course. If their parents thought they were wonderful, talented and capable, the tended to look at themselves that way. If their friends, including boyfriends & girlfriends, thought they were good people, worthy of kindness and respect, then they would feel the same way about themselves, too.

This is one of the reasons why God needs to be important to us – because God thinks you’re wonderful!

To be a Christian is to believe that what Jesus says is true.  True for you!

We talk about “believing in Jesus.” What does that mean?

–It means to believe that what Jesus said & did is true.

–It means to believe that the promises of Christ are for you!

The Grace of God is for you!

The Love of God is for you!

The service ended with Andrea Loew singing, “You Say,” by Lauren Daigle.

Andrea did an amazing job, but I’m not sure our recording of it did it justice. So below you’ll find the lyrics and a link to Lauren Daigle singing, “You Say.” 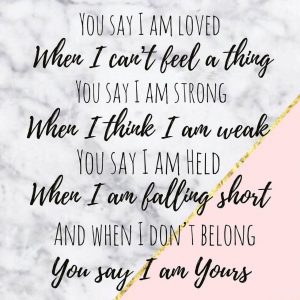 You say I am loved when I can’t feel a thing
You say I am strong when I think I am weak
And you say I am held when I am falling short
And when I don’t belong, oh You say I am Yours
And I believe
Oh I believe
What You say of me
I believe

You say I am loved when I can’t feel a thing
You say I am strong when I think I am weak
You say I am held when I am falling short
When I don’t belong, oh You say I am Yours
And I believe
Oh, I believe
What You say of me
I believe

Oh, I believe
Yes I believe
What You say of me
I believe