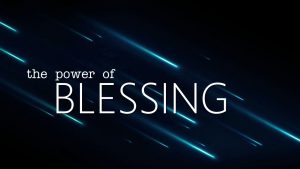 Our passage this morning comes from the Old Testament story of Isaac blessing his son, Jacob. If you know the story, you know that it’s a fascinating story that is strange and troubling to our ears.

Genesis 27:1-4   First, we see the good intentions of Isaac, the father in the story.

When Isaac was old and his eyes were dim so that he could not see, he called his elder son Esau and said to him, “My son”; and he answered, “Here I am.” 2He said, “See, I am old; I do not know the day of my death. 3Now then, take your weapons, your quiver and your bow, and go out to the field, and hunt game for me. 4Then prepare for me savory food, such as I like, and bring it to me to eat, so that I may bless you before I die.”

It’s like he’s saying, “Let’s pretend it’s Father’s Day, and it could be our last Father’s Day together. So go out and hunt something and cook it up just right.”

He says these words to Esau. Esau was the hunter. Jacob, his brother, was the rascal.

At the suggestion of his mother, Jacob dresses up like his Esau, and pretends to be Esau, so he can get the family blessing and the birthright.    (Ugly dysfunction – lying, deception, favoritism, etc.)

Let’s skip ahead to the blessing.

24He said, “Are you really my son Esau?” He answered, “I am.” 25Then he said, “Bring it to me, that I may eat of my son’s game and bless you.” So he brought it to him, and he ate; and he brought him wine, and he drank. 26Then his father Isaac said to him, “Come near and kiss me, my son.” 27So he came near and kissed him; and he smelled the smell of his garments, and blessed him, and said, “Ah, the smell of my son is like the smell of a field that the Lord has blessed.28May God give you of the dew of heaven, and of the fatness of the earth, and plenty of grain and wine. 29Let peoples serve you, and nations bow down to you. Be lord over your brothers, and may your mother’s sons bow down to you. Cursed be everyone who curses you, and blessed be everyone who blesses you!” 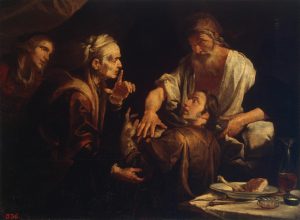 I’d like to spend a few moments this morning thinking about parenting.

I used to preach more often about parenting . . . . but then I had kids, and I realized that I really didn’t know what I was talking about!

I’d like us to think about raising children, influencing children, loving children through the idea of the “Blessing,” as illustrated by Isaac blessing his son, Jacob.

This was a very powerful concept in ancient times, so much so, that even though Isaac gave his blessing to the wrong son, it could not be revoked. It was binding. The spoken blessing was powerful. And we can bless our children & grandchildren, our nieces & nephews by giving the sort of blessing that Isaac gave Jacob.

The first thing we notice about Isaac’s blessing, his expression of favor and affection and love for his son, is that it came with touch. Isaac said, “Come near and kiss me, my son.”

Nearly every expression of blessing in the Bible was accompanied by meaningful, appropriate touch. Sometimes it was a kiss. Other times a hug, or the laying on of hands. Think of how many of Jesus’ miracles came with touch. He even touched lepers and healed them. Or how about Jesus blessing the children. How did he do it?

“And He took them in His arms and began blessing them, laying His hands on them.” (Mark 10:16)

There’s asking permission to give a hug.

And you know what? – all those things are good, right and necessary.

But we should never forget that children need to be touched and held.  They’re blessed by that.

Illustration. I visited Liz & Evan & Nicholas this past week to talk about baptism. One of the things I couldn’t help but notice was during the entire visit Evan was holding Nicholas. At first burping him, and then for the rest of the time he laid across your lap and you gently rubbed his back as he fell off to sleep. Babies needs that. Children need touch. We all need touch.

My pastor used to say, “We all need a hug a day to survive and 5 to thrive.”

Illustration. Years ago I was visiting a Homebound parishioner. At the end of the visit I gave her a hug at the door, and she said some sad words I’ve never forgotten: “You’re the only one who give me hugs anymore.”

For some people, touch is their “Love Language.” I’ll bet many of you are familiar with Gary Chapman’s best-selling book, Love Languages.

Chapman says there are 5 ways of expressing love:

He says we all have a favorite or two, and we tend to love others out of our favorite “language.”

Illustration. Years ago when I was a teenager, I remember hanging out with a family watching a movie.  And during the entire movie, the teenage daughter sat on the couch and had her feet on her mother’s lap, and her mother massaged her feet for 2 hours, for the entire movie. It was the strangest things I’d ever seen! I later asked if the daughter had issues with her feet.  Then I wondered if the whole family had issues with feet!

But I learned from Gary Chapman’s book, that touch was the love language of their family. Isaac’s blessing came with meaningful touch.

It also came with words.

May God give you of the dew of heaven, and of the fatness of the earth, and plenty of grain and wine. (27:28)

Our children, grandchildren, nieces and nephews, should never have to wonder how we feel about them.

We need to use our words to tell them. 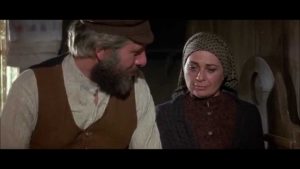 ILL. Fiddler on the Roof includes that lovely song, “Do You Love Me?”

It is nice to know.

Our words are important, aren’t they?

My mother wasn’t much for words. One of her brothers told me that they never heard the words, “I love you” growing up. My mother said, I love you, through 3 taps on the knee whenever we got into the car together.

And she occasionally said it in words, too.

A week or two before she died, she gave me an Isaac-like blessing.

She looked at me and said, “You’re going to have a good life.” And most days I think she was right. Those words of blessing have stuck with me all my life. They’ve blessed me with hope, confidence and security.

Illustration. Sign on a refrigerator. “The way that we talk to our children becomes their inner voice.” 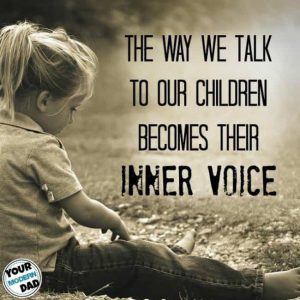 We need to be careful how we correct our children.

“Did you even try? How lazy is that?

“How could you be so stupid?”

Later that becomes, “How could I be so stupid?”

Our voices of correction can leave an imprint, an inner voice that will cry out in their heads when the make a mistake.

Vs. 27 says, Isaac, “smelled the smell of his garments, and blessed him, and said, “Ah, the smell of my son is like the smell of a field that the Lord has blessed.

That may not sound like much of a compliment to us (“You smell like a field! Get out of here!”), but in an agrarian society, the smell of vital, healthy field producing a rich harvest would have been delightful and life-giving.

Esau was a farmer and a hunter, and Isaac was affirming his gifts and his passion.

Vs. 28 – May God give you of the dew of heaven, and of the fatness of the earth, and plenty of grain and wine.”

Specifically Cherishing the Uniqueness of a Child helps them explore and discover their gifts and abilities. And this can be a challenge sometimes.

Illustration. My sons, Ben & Sam, are now 18 & 20 yrs. old. They decided years ago that they no longer liked sports, and that watching & playing sports were a total waste of time. I considered shock therapy (just kidding).

They developed their own interests and passions – for one it was music (which I could connect with), for the other it’s photography and fashion (much harder for me to connect with). My idea of fashion is the latest “Lands End” catalog. But my older son wants to be a fashion photographer. I’ve bought him fancy cameras. I’ve made photo books of his pictures. I’ve learned a little bit about urban fashion and Jeezy sneakers and hoodies.

Let me close with this story, that sums up the power of a blessing upon a child. 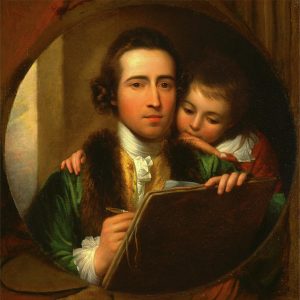 One day when Benjamin was just a boy, he was put in charge of his sister Sally while his mother went out for a bit. He decided for entertainment, he would have her pose and he’d paint her picture. So he found some bottles of colored ink and proceeded to paint Sally’s portrait. By the time Mrs. West returned, ink blots had stained the table, the chairs, and the floor. Benjamin’s mother looked over the mess without saying a word and then she saw the picture Benjamin had painted. She picked it up, and said, “Why, it’s Sally!” And she bent down and kissed her young son.

In 1763, when he was 25 years old, Benjamin West was selected by King George III to be the official painter of British history. He became one of the most celebrated artists of his day. He was once asked what got him started as a painter. He told the story I just told you, and then added,

“My mother’s kiss made me a painter.”

And that’s the power of blessing – with words, with affection, with affirmation.