I want to briefly highlight 3 scriptures that are extremely important for us today.

All people are created in God’s image. All “humankind.”

You’ve never looked at a person who’s not made in the image of God.

A very popular TV commentator recently put down the idea of diversity. “Why do we celebrate diversity? How is diversity a strength of our county?”

I guess I have a different understanding of American history. But I certainly do know this: Our God happens to love diversity! Just look at those made in God’s image! And think of the diversity in art, music & fashion, not to mention the diversity in the animal kingdom and plant life. God loves diversity!

“‘When a foreigner resides among you in your land, do not mistreat them. The foreigner residing among you must be treated as your native-born. Love them as yourself, for you were foreigners in Egypt. I am the Lord your God.

This command is repeated over & over again in the Old Testament, such as Exodus 22:21: “Do not mistreat or oppress a foreigner, for you were foreigners in Egypt.”

I believe this passage has something to say about the refugee/immigrant situation. But what I want to highlight is when the issue is how to treat those who are a little different from you, the answer is, “Love them as you love yourself.” Sound familiar? Jesus of course said, “Love your neighbor as yourself.” This is where he got it from, Leviticus, of all places!

Shouldn’t that put an end to all prejudice & racism?   Love your neighbor as yourself.

Of course not. Treat your neighbor as you’d like to be treated.

If you know or remember the passage, the disciples are speaking in strange “tongues,” strange languages, which turn out to be the languages of all the people gathered.  Picking up at Acts 2:6 –

6And at this sound the crowd gathered and was bewildered, because each one heard them speaking in the native language of each.7Amazed and astonished, they asked, “Are not all these who are speaking Galileans? 8And how is it that we hear, each of us, in our own native language? (9Parthians, Medes, Elamites, and residents of Mesopotamia, Judea and Cappadocia, Pontus and Asia, 10Phrygia and Pamphylia, Egypt and the parts of Libya belonging to Cyrene, and visitors from Rome, both Jews and proselytes, 11Cretans and Arabs) – in our own languages we hear them speaking about God’s deeds of power.”

The Holy Spirit fell upon the early Christians and the Spirit brought the nations together. The Spirit brought unity & community, oneness & harmony. That’s what God’s Spirit does. And whenever we help create that unity, we are doing God’s Work.

I’ll close with 3 Myths about Racism for us to consider.

If we have no intention of hurting someone, then we might feel resentful for being accused of racism. But we can hurt others intentionally and also unintentionally.

Ex. The name of the Washington DC professional football team has become controversial for a number of years now. The terms “Redskins” is offensive to many Native Americans. Are people meaning to be offensive? No. But that’s not the point! Intention isn’t the only thing that matters.What matters is how’s it’s heard and felt by those of that community.

So when we’re accused of saying something insensitive, we don’t have to become defensive. We can simply say, “I’m so sorry. I didn’t realize that that would be hurtful or offensive to you. Please help me understand more.” 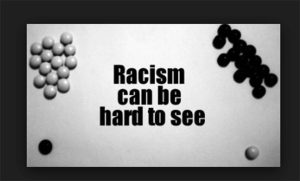 I don’t know about Santa, but Jesus was not Caucasian. Middle-eastern. No one would have described him as white. The person who made those comments, Laura Ingraham, graduated from Dartmouth College and the U. of Virginia Law School. Education doesn’t solve racism.

You can’t change a person’s mind unless you first change their heart.

That’s where love comes in. And building relationships with one another.

So let’s be hopeful, like Andy, who spoke to us this morning.

But let’s not be complacent.

Let’s do everything we can to build a better, stronger more loving nation and world! 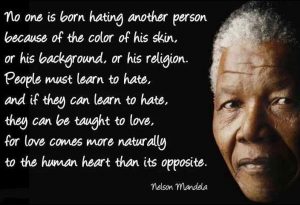