It’s well known that there are 4 accounts of the life of Jesus Christ.

Each begins in a unique way.

Matthew begins with a genealogy to establish Jesus’ Messianic credentials as a descendent of Abraham & Sarah, and in the line of King David, the messianic line.

Mark begins with the baptism of Jesus to put forth that he was the Son of God, “This is my beloved Son.”

Luke begins with Christmas to establish Jesus within human history, in real space and time – Nazareth, Bethlehem, Roman Empire, during the reigns of Caesar Augustus & Quirinius.

John begins his Gospel with a masterpiece. 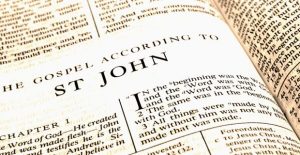 5The light shines in the darkness, and the darkness did not overcome it. 6There was a man sent from God, whose name was John. 7He came as a witness to testify to the light, so that all might believe through him. 8He himself was not the light, but he came to testify to the light. 9The true light, which enlightens everyone, was coming into the world. 10He was in the world, and the world came into being through him; yet the world did not know him. 11He came to what was his own, and his own people did not accept him. 12But to all who received him, who believed in his name, he gave power to become children of God, 13who were born, not of blood or of the will of the flesh or of the will of man, but of God. 14And the Word became flesh and lived among us, and we have seen his glory, the glory as of a father’s only son, full of grace and truth.

15(John testified to him and cried out, “This was he of whom I said, ‘He who comes after me ranks ahead of me because he was before me.’”) 16From his fullness we have all received, grace upon grace. 17The law indeed was given through Moses; grace and truth came through Jesus Christ. 18No one has ever seen God. It is God the only Son, who is close to the Father’s heart, who has made him known. 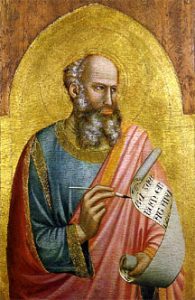 John begins his gospel with deliberate echoes of Genesis 1, the first chapter of the Bible.

In the beginning when God created the heavens and the earth.  (that’s Gen. 1)

John echoes Genesis, not only in his choice of words, but also in his choice of literary genre, the type of writing that it is. John begins with a poem –The Christ-Poem, as it’s called. Genesis 1 is also a poem.

Some things are too glorious for prose, for normal, standard writing.

Some things are so majestic and so divine that only poetry can begin to do it justice! 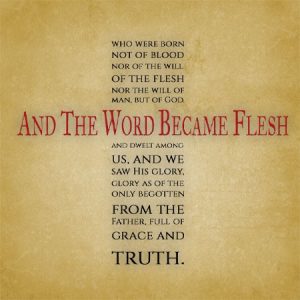 Poetry, it seems to me, is better than prose at expressing mystery and paradox.

Poetry can allow for multiple layers of meaning – “In him was life, and the life was the light of all people.”

Poetry can often express profound truths sometimes using far fewer words – “The Word became flesh and dwelt among us.” That may be the best description of the life of Jesus found in the entire Bible – he’s God’s message to us, God’s Word to us. – a Word of Light and Life and Love.

A number of scholars suggest that this Christ-poem was originally a hymn of the Early Church. It’s certainly lyrical, rhythmic at places, using elevated language and beautiful images. Poetic in nature. It’s a work of art. 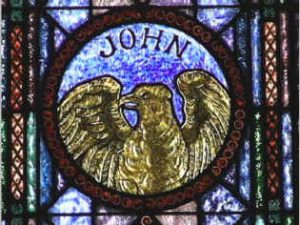 You know, John the Apostle was a fisherman and a disciple, and he became an artist, painting the life of Jesus Christ with his words. The symbol of John’s Gospel is an Eagle, because John soars above and beyond the other gospel writers. We believe that John’s Gospel was the last one to be written. It almost seems like John read the other 3 gospels and said, “You guys left out some really good stuff.”

93% of John’s Gospel is original to him, meaning it’s not found in the other three gospels. That’s partly what makes John an artist. He’s original. He soaked up the teachings of Jesus like no one else had done. These teachings became his life, and that life was the light of his life. And he so personalized them & internalized them that he expressed the teachings of Christ with 93% uniqueness.

Think about what an artist does, especially a musician who’s an artist, maybe even vocal performers who are artists at their craft. They take a song and make it their own. They give themselves to the music, and they express the song with their whole being, with everything they’ve got –  heart, soul, mind and strength. 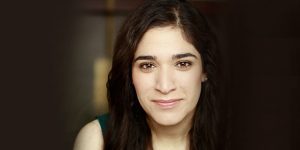 Through the years I’ve occasionally sung Amazing Grace at funerals. – usually it’s been at the graveside or in a funeral homes. The family wants Amazing Grace and I can’t find anyone else to sing it, I’ve offered and have sung it a time or two. But after today – I’ll never sing it again! Once you hear it done by an artist, nothing else compares.   (earlier in the service Ana Mora sang a glorious rendition of Amazing Grace!)

Monique Billingsley is a musical artist herself and a professor at the Boston Conservatory at Berklee College of Music. I asked Monique this week what makes an artist, as compared with someone who simply hits all the right notes.

“A true artist takes it further and finds a unique way of expressing their art personally – which communicates something new to the audience.  There needs to be an element of originality (copying is not art) and communication (it needs to say something to an audience (visual art, music, etc.).” 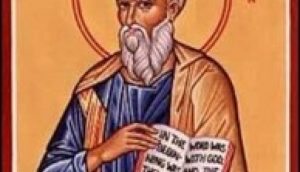 John, the Gospel writer, was an artist.

He had something original to say and he communicated it in his own unique way.

I want to close by suggesting that that’s our calling too – to be artists in expressing our own Christian faith.

To make the faith our own.

To give ourselves to the music of the Gospel.

To express it through our own unique personalities, using the varied gifts that God gave us individually.

We’ve talked before about II Cor. 5:17 – “If anyone is in Christ, there is a new creation.” – and the word that translated “creation” means a new species – something that never existed before – the one and only you in union with the one and only God. 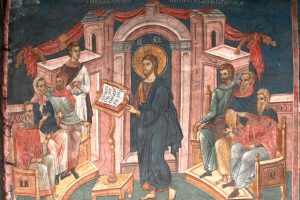 Christianity is more of an art than a science.

Some people reduce it to a behavioral science, and various churches tell you what those behaviors should be.

But being a Christian is being an artist.

We give ourselves to the art of expressing God’s love.

And we express it with all we got – heart, soul, mind and strength.

And we express it uniquely, with who we each are in Christ – so that the Word might become flesh through us.

Lord Jesus, you are the greatest artist of all, and you painted such a beautiful and captivating picture of God’s love.  Teach us to be artist, too. And now come to us in the sacred meal. Inspire us, feed us and fill us at your table. Amen. 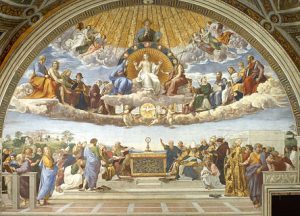 Be an artist this week.

Be the one and only you in Christ.

And sing the Gospel of God’s Love with joy and with everything you’ve got.

And as you do,

The Grace of our Lord Jesus Christ,

The Love of God our Creator.

And the Fellowship of the Holy Spirit will be with you!