This Fall we’re studying “One Verse Wonders.” These are verses that teach a lot in just a single sentence. “One Hit Wonders” in music are one and done, and the artist is never heard from again. “One Verse Wonders” continue to speak and teach and resonate.

Today’s One Verse Wonder is John 15:9

“As the Father has loved me, so I have loved you; abide in my love.”

Of course, every verse has its setting & context, so let’s take a look at John 15.  The setting is the Last Supper, the night before the Cross, the night that Jesus would give them the sacrament of Holy Communion.

”I am the true vine, and my Father is the vinegrower (other translations say, “the gardener”). He removes every branch in me that bears no fruit. Every branch that bears fruit he prunes to make it bear more fruit. You have already been cleansed by the word that I have spoken to you. Abide in me as I abide in you. Just as the branch cannot bear fruit by itself unless it abides in the vine, neither can you unless you abide in me. I am the vine, you are the branches. Those who abide in me and I in them bear much fruit, because apart from me you can do nothing. Whoever does not abide in me is thrown away like a branch and withers; such branches are gathered, thrown into the fire, and burned.”

Comment on verses 5 & 6.    These are challenging verses. “Apart from me you can do nothing.” The branches that fall off from the vine are of no use. They’re thrown away and burned.  Here’s an important point  – Jesus is NOT speaking to those outside the faith, or those perhaps attached to another vine, so to speak. He’s speaking to his disciples, and he’s urging them to maintain a vital connection with him if they’re to carry on the work of his kingdom amidst the challenges they’ll face. If they are not spiritually strong with God and each other, they won’t make it. They’ll wither and die. It’s important to remember who Jesus is speaking to.

If you abide in me, and my words abide in you, ask for whatever you wish, and it will be done for you. My Father is glorified by this, that you bear much fruit and become my disciples.

As the Father has loved me, so I have loved you; abide in my love. If you keep my commandments, you will abide in my love, just as I have kept my Father’s commandments and abide in his love. I have said these things to you so that my joy may be in you, and that your joy may be complete. “This is my commandment, that you love one another as I have loved you. No one has greater love than this, to lay down one’s life for one’s friends. You are my friends if you do what I command you. I do not call you servants any longer, because the servant does not know what the master is doing; but I have called you friends, because I have made known to you everything that I have heard from my Father.

Jesus said, “As the Father has loved me, so I have loved you; abide in my love.”

I want to spend most of our time this morning on the second half of that verse, “Abide in my love.” But the first part is one of the most remarkable passages in all the Bible.

“As the Father has loved me, so I have loved you.”

Think about that for a moment.

Jesus is saying to his followers, “In the same way that God the Father loves me, I love you.” “As the Father has loved me.”

Could it get any better than that?

Illustration. Several years ago, a parishioner of mine told me about a beautiful moment she had with her parents. She’d just given birth to her first child, and her parents were visiting to meet their first grandchild. They spent many hours just staring at this gorgeous child.

At one point, the mother of the newborn said to her parents,

“It’s just amazing how much I love him. It’s a depth of love I’ve never felt before.”

Her mother then replied, “Honey, that’s how much your father & I love you.”

And it was a whole new understanding of the depth of her parents love for her.

“As the Father has loved me, so I love you,” said Jesus.

“As the Father has loved me, so I have loved you; abide in my love.”

“Abide in my love,” said Jesus.

It’s such a beautiful word, “Abide.”

Other translations say, “Remain in my love.”  (NIV).

Another one says, “Dwell in my love.”

Still another says, “Continue in my love.” (Weymouth NT).

It’s such a elegant phrase. It’s also an invitation and a directive.

The letter of James states the same truth: “Draw near to God and God will draw near to you,” It’s mutual abiding. It’s also Synergistic – where the vine gives life to the branches and the branches give extension to the vine. They bless each other. They need each other! 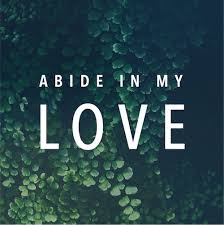 How can I describe for you this abiding? It’s many different things, isn’t it?

A. It’s a little like the Olympic runner, Eric Liddel, made famous in the movie, “Chariots of Fire.” Liddel said, “When I run I feel his pleasure.” As he ran he was abiding in Christ, and Christ in him. 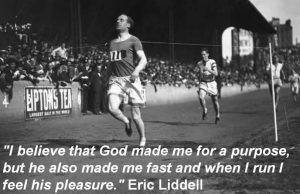 B. It’s also like a former parishioner of mine named Clayton. He was a good, solid Mainer. Quiet, hard-working, always greet you with a smile. Because of that smile and warmth he & his wife were frequently the greeters at the church. But no one ever heard Clayton speak about his faith. Not even his wife.

She told me that as Clayton was nearing the end of his life. And so when I had a moment alone with him I asked him, “Clayton, are you afraid?”  He looked up and had that smile on, and he said, “Where would we be without God?”

I didn’t know his wife was behind me, but when I turned around she had tears of sadness and joy rolling down her face. Clayton was abiding. “Abide in me. Remain in my love.”   And he was. The life of the Vine was flowing through that branch.  Abide. 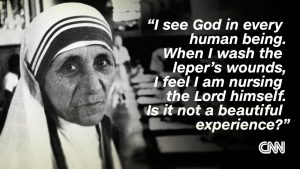 C. It’s also like Mother Teresa of Calcutta, now Saint Teresa. She found the strength to care for the “poorest of the poor” and run a loving hospice center for children who were on death’s doorstep.

She said, “We’re not just loving the poor, we’re loving Jesus in them.”

She was abiding in Jesus as she loved people in his name! The Life of the Vine was extended through her. “Abide in me and I will abide in you . . . and you shall bear much fruit.” And she did.

D. Abraham Heschel had a great phrase about abiding. Heschel was a very prominent Jewish Theologian in the previous century. Very highly regarded by people of many faiths. 53 years ago he walked across the Edmund Pettus bridge in Selma, Alabama, dangerously in the front row.

“When I marched with Dr. King I was praying with my feet.” 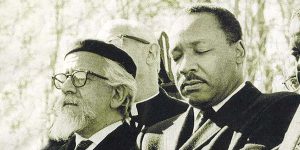 He was also abiding in the love and justice of God.

E. The “Two Brothers” Story is a beautiful story of abiding. It comes from the Talmud, a collection of Jewish teachings and legends that compliment stories in the Bible. 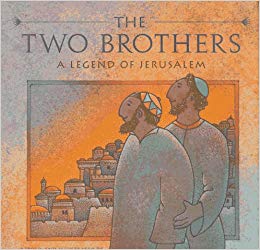 Long, long ago in the land of Israel, there lived an old farmer who had two sons. When the farmer died he left his land to his two sons. They divided the land evenly and built their own houses on opposite sides. The younger brother soon married and had a large family. The older brother did not marry and lived alone.

The brothers worked together every day on the farm and in the mill that was part of the farm. At the end of each day they divided the grain that they had ground equally. Each took the same amount of grain to their individual barns.

Well, each night the married brother would sit in his house and say to himself, “You know, it’s not really fair that we divide the grain equally, because I have many children to care for me when I am old, and my brother has no one.” So each night the married brother would go out to his barn, fill a sack with grain and sneak it over to his single brother’s barn. It was always a mystery to them how their piles were replenished each morning. Til one night the mystery was cleared up when they left their barns at the same time and met in the field between their farms. They immediately put down their sacks of grain and embraced, because they knew how much they were loved.

They say that God looked down from heaven at the exact moment that those two brothers embraced. And God said, “This is holy ground, for here I have witnessed incredible love. It is here that I wish to dwell.” And it’s said that the great temple in Jerusalem was built on the very spot where those two brothers embraced, for God dwells among us when we love. When we abide in love, God is living and loving through us.

“Abide in me and I will abide in you.”

When we give ourselves to others, we’re abiding.

When we offer an outstretched hand to another in friendship, assistance or forgiveness, we’re Branches abiding in the Vine.

It’s one of the most beautiful words in our faith. And it’s one of our most important words, isn’t it?

And let us pray:

Lord Jesus Christ, abide in us, as we strive to abide in you. You are the True and Living Vine. And we are honored to be branches on that Vine. Prune us when we need it. And feed us constantly with the spiritual food we need to bear fruit for you. Feed us this morning through the sacred meal, that the Life of the Vine may be extended in beautiful ways through us. Amen.