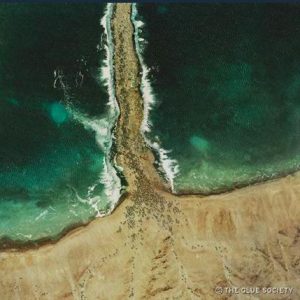 Series: “Going to the Beach with God”
Because big things happen on beaches in the Bible!

The traditional date for the Exodus is around 1450 BC., Although many scholars today favor a later date. 13th Century BC.

Some scholars believe the body of water involved here was actually the Reed Sea, an area north of the Red Sea, known for its flash floods. 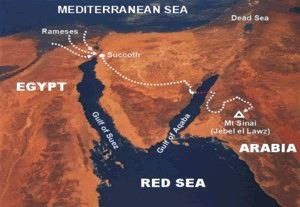 5When the king of Egypt was told that the people had fled, the minds of Pharaoh and his officials were changed toward the people, and they said, “What have we done, letting Israel leave our service?” 6So he had his chariot made ready, and took his army with him; 7he took six hundred picked chariots and all the other chariots of Egypt with officers over all of them. 8The Lord hardened the heart of Pharaoh king of Egypt and he pursued the Israelites, who were going out boldly. 9The Egyptians pursued them, all Pharaoh’s horses and chariots, his chariot drivers and his army; they overtook them camped by the sea, by Pi-hahiroth, in front of Baal-zephon.

10As Pharaoh drew near, the Israelites looked back, and there were the Egyptians advancing on them. In great fear the Israelites cried out to the Lord. 11They said to Moses, “Was it because there were no graves in Egypt that you have taken us away to die in the wilderness? What have you done to us, bringing us out of Egypt? 12Is this not the very thing we told you in Egypt, ‘Let us alone and let us serve the Egyptians’? For it would have been better for us to serve the Egyptians than to die in the wilderness.” 13But Moses said to the people, “Do not be afraid, stand firm, and see the deliverance that the Lord will accomplish for you today; for the Egyptians whom you see today you shall never see again. 14The Lord will fight for you, and you have only to keep still.”

21Then Moses stretched out his hand over the sea. The Lord drove the sea back by a strong east wind all night, and turned the sea into dry land; and the waters were divided. 22The Israelites went into the sea on dry ground, the waters forming a wall for them on their right and on their left. 23The Egyptians pursued, and went into the sea after them, all of Pharaoh’s horses, chariots, and chariot drivers. 24At the morning watch the Lord in the pillar of fire and cloud looked down upon the Egyptian army, and threw the Egyptian army into panic. 25He clogged their chariot wheels so that they turned with difficulty. The Egyptians said, “Let us flee from the Israelites, for the Lord is fighting for them against Egypt.”26Then the Lord said to Moses, “Stretch out your hand over the sea, so that the water may come back upon the Egyptians, upon their chariots and chariot drivers.” 27So Moses stretched out his hand over the sea, and at dawn the sea returned to its normal depth. As the Egyptians fled before it, the Lord tossed the Egyptians into the sea. 28The waters returned and covered the chariots and the chariot drivers, the entire army of Pharaoh that had followed them into the sea; not one of them remained. 29But the Israelites walked on dry ground through the sea, the waters forming a wall for them on their right and on their left. 30Thus the Lord saved Israel that day from the Egyptians; and Israel saw the Egyptians dead on the seashore. 31Israel saw the great work that the Lord did against the Egyptians. So the people feared the Lord and believed in the Lord and in his servant Moses.

Old Testament Stories have 3 layers of meaning, 3 levels to each story.

How does this story fit into the history of the Isrealites?  It’s essential and  foundational, isn’t it? It’s the key saving event in the Hebrew Scriptures.

Without it there’s no Israelites (they would have simply been a tribe of slaves within Egypt). They’d be no Old Testament, no psalms, no prophets, no Ten Commandments.

The Exodus is to the OT what Easter is to the NT! (without Easter we probably would have never heard of Jesus Christ) 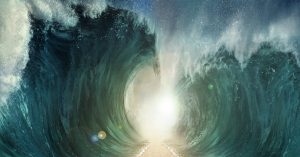 What does the story teach us about God?

How is the story part of God’s sacred story?

This event is crucial in at least two ways:

A Jewish friend of mine says, “All people are chosen by God. We were just the first!”

Israel was “blessed to be a blessing” – chosen to experience these things and then share them with the world. The Exodus preserved the Israelites for their mission!

B. Secondy, this passage is crucial because God’s heart of justice is revealed in the story.

Freeing the Israelites was an act of justice, releasing the captives, letting the oppressed free.

I have a dear Rabbi friend, named Howard Mandell. We have long, wonderful talks about God, life and the Bible. One day Howard said this:

“We Jews have always been deeply concerned about social justice issues, because of our history Egypt and the Exodus. God is always on the side of justice.” 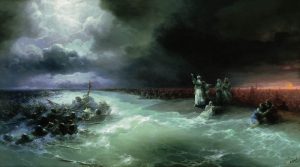 Howard has also taught me about the importance of the Talmud, a collection of ancient Jewish writings that that go along with scripture and often compliment scripture or even challenging it or balancing it out. Such as this story:

Following the Exodus God’s angels returned to heaven. These were the angels that held back the waters and then let them go to drown the Egyptians.

“We got ‘em!” they shouted. “We got those Egyptians! Did you see what happened to them? Wow!”

And they started to sing in celebration.

God shouted to them, “Silence! “How dare you sing for joy when my children are dying” (Talmud, Megillah 10b and Sanhedrin 39b).

Isn’t that quite a story? It seems to be saying that the biblical account didn’t quite go far enough. We now know more about God; namely that all people are God’s children.

So that’s the first two layers/levels of the story:

First, how does it fit into the story of the Israelites?

And second, how does it fit into God’s Story, the story of God’s relationship with humanity, the sacred story?

What can I learn from the story?

What does it mean for my life?

How can I apply it to my life?

Of course, this is unique to each one of us. What word/message can God speak to you from this story? What I’d like to suggest is that it has something to say to each of us when we’re in an impossible situation.

The Israelites were between a rock & a hard place. On one side was Pharaoh’s approaching army. On the other side was the Red Sea. It was hard for them to believe that God would make a way, but God did.

A. Sometimes the way through becomes very clear. Sometimes it’s right before our very eyes.

Illustration.There was a woman at my first church named, Toni. Toni’s husband had a debilitating stroke, which led to a long recover. When the stroke happened, the couple was in the midst of renovating their kitchen. Toni’s husband was very skilled and had been doing most of the work himself. Money was now quite tight, and Toni wondered how they would finish the project.

One Sunday morning Toni sat in church filled with anxiety. Her life was in such an upheaval. During the prayer time, she kept thinking about the mess their house was in because of the unfinished kitchen.  “How will I ever get the new cabinets hung?”

The prayer time finished, and she opened her eyes and then realized she was sitting right behind one of the best carpenters around? His name was Olin, a man as kind as he is skilled. They talked after church. Toni shared her problem with Olin, and within a matter of days, the kitchen cabinets were hung. The answer became very clear and it was right before her eyes.

B. Other times the answer isn’t so clear and we just have to keep walking and trust that the way will appear. 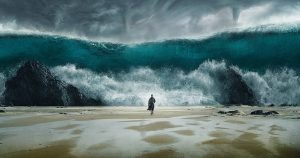 There’s another Hebrew legend about the Exodus that I’d like to close with.

It’s called, The Nahshon  – “the Initiator”   (Emily Heath shared this story in her first two books.)

The point of the story is that sometimes God asks us to show some courage and faith and commitment. We participate in the miracle. We partner with God to bring about a change in our lives or the lives of others. We take the risk to step off the beach and into the Red Sea.

Reaching out to someone?

Asking someone for forgiveness?

Asking someone for help?

Maybe God is calling us to get off the beach and step into the Red Sea and start walking? 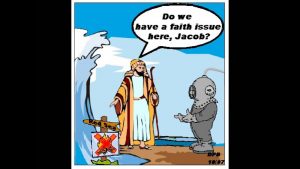