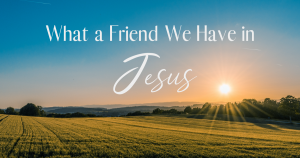 “This is my commandment, that you love one another as I have loved you. No one has greater love than this, to lay down one’s life for one’s friends.  You are my friends if you do what I command you.  I do not call you servants any longer, because the servant does not know what the master is doing; but I have called you friends, because I have made known to you everything that I have heard from my Father.

Some years ago I was part of an event at the University of New England in Maine. The event was on, “Spirituality in the Healing Process,” utilizing a person’s faith as an asset in their health care.  A hospice chaplain spoke, a nurse, a family physician and me. During my talk I mentioned how for many people a person’s faith sticks with them for life. I mentioned the nursing home services I’ve done and how many times I didn’t think anyone was alert enough to take in what I was saying until we sang a hymn. And they all sang! And they’d know, not only the first verse to Amazing Grace, but also the 4th verse! I told the story of visiting someone in ICU who had been unresponsive for several days until I started praying the Lord’s Prayer and their lips started moving. Suddenly one of the professors in the back of the room spoke up and said, “I don’t have a religious background. None. My inspiration comes from Rock n Roll. It comes from the Beatles & the Rolling Stones.” 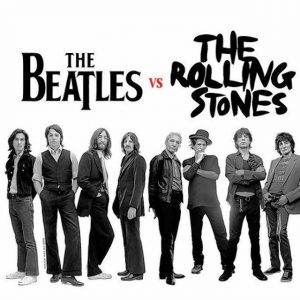 But is that enough? Will that pull you through?

I thought of that moment in recent years as I’ve had at least 3 funerals that ended with Beatles’ songs. (These were all in funeral homes)

When the going gets tough – what keeps you going? What gives you inspiration? Strength? Hope?

“Let It Be” is a great song. But is it enough to cling to?

Instead, how about these words, 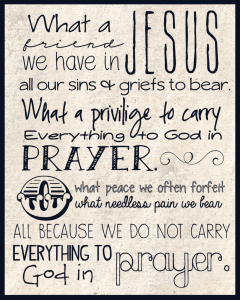 I think I’ve told you about a parishioner of mine named Mrs. Lord.

Mrs. Lord joined the church I was serving late in her life. I never had a conversation with her about her faith until about 3 weeks before she died. I asked her if she was afraid, as it’s only natural to be afraid. Her eyes opened wife and with gentle sincerity and conviction she said,

“No. I’m not afraid. I was taught to trust what Jesus said.”

I was taught to trust what Jesus said.”

He said, “Come unto me all you who are weary and I will give you rest.”

“As the Father has loved me, so I love you.”

“I have called you friend.” 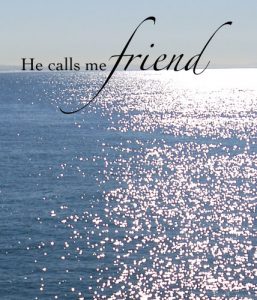 A friend wants only the best for you!

A friend helps carry your burdens & celebrates your victories

My mother used to say,“A friend is someone who’s with you in your messes.”

A friend comes walking in when everyone else is walking out. 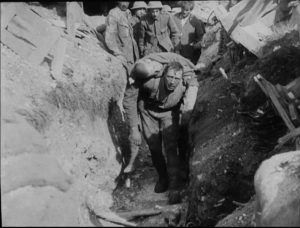 I’ll close with this story. It’s a battlefield story from WWII.

A terrible skirmish had taken place, and eventually the two sides retreated to their trenches, while the bullets kept flying.  One young Soldier quickly realized that his friend didn’t make it back. And so he said to his commanding officer:

Well, the officer turned his back for a second and the young soldier crawled out of the trench and ran toward “No Man’s Land.”    A little while later he stumbles back into the trench carrying his friend on his back. But his friend didn’t make it. He wasn’t alive. The Commanding Officer hollered, 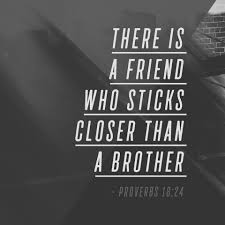