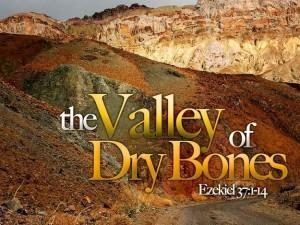 Before I read the passage I want to let you know that I’m going to ask you afterward. It’s this:

How you think Ezekiel felt after receiving this vision. His reaction?

This vision was given to Ezekiel during the Babylonian captivity (586-537 BC), while the Jews were exiled in Babylon (southern Iraq), far from home. Some scholars think that there might have been an actual “Valley of Dry Bones,” where perhaps a large battle was fought and lost. Let’s give a listen . . .

How do you think he felt afterwords?

Was he delighted? Entertained? This was before special effects in action movies.

We look at dreams as coming from our unconscious.

What would Ezekiel think about the origin of dreams? – that they came from God.

They even wrote down many of their visions.

We call it “Apocalyptic” literature –visions, crazy scenes, often about the end times.

We have only one book in the NT that is apocalyptic. Revelation.

Why did God speak to Ezekiel through a vision?

-get his attention, more likely to accept it – less direct

– it’s a new & different way of saying it. Isaiah was told to comfort the people with words,  “Comfort ye, comfort, my people!” Ezekiel was given a vision to share.

Have you ever had trouble understanding someone and have asked them to say it again in a different way, using different words or expressions or maybe a vision using skeletons?

Sometimes we have to hear something more than once, and often in different ways to really get the message.

ILL. Word Pictures. Psychologist Gary Smalley talks about word pictures as a great way for couples to communicate. The idea is to paint a picture with words to describe how you’re feeling or what you’re experiencing.

Ex. Husband made a big decision without consulting his wife. So she used a word picture and said to him:

“I feel like we were playing doubles tennis and I was your partner, but you wouldn’t let me hit the ball at all.”

Communicating through word pictures – isn’t that what God did?

There are 3 Things I’d like you to remember about this passage:

Vision is powerful. It’s essential. It can shape the future.

ILL. Ice Skater sees the jump and then leaps into it.

ILL. The Diver sees the dive and then takes flight..

ILL. Difficult conversation. – envision you and the person talking calmly, picture it going well, think about what might get the conversation off-track, envision and pray through your vision. That can help make it happen.

ILL. Our Country’s Divide right now is so challenging because it’s hard to see a way out, a way to come together.

We can’t even agree on the same set of facts.

That’s why this story of the Valley of Dry Bones is so relevant.

When we can’t see a way out or a way through, God can.

When we lack for vision, maybe we need to ask God to give us a vision. 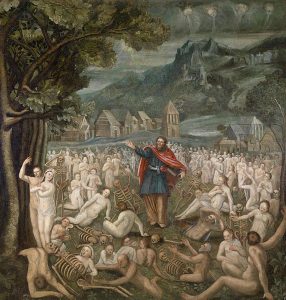 If Israel could come back to life after the Babylonian Captivity (they returned in 537 BC and rebuilt the city and the temple) then we can come back from this strange experience we’re all having. 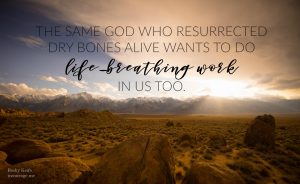 Augustine once said this:

The Old Testament is the New Testament concealed.

Hope!  – that they could be a people again back in their homeland. 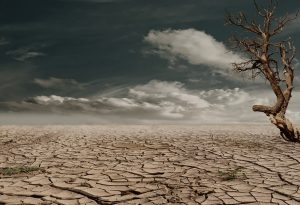 ILL. Let me close with this story.

There was a farming community out west that was experiencing a severe drought.

It hadn’t rained in months. The fields were bone dry and the town was crumbling economically and emotionally.

The clergy in town organized a prayer service in the town square.

Since there were all from different faith traditions, the clergy asked folks to bring a symbol of their faith.

At the close of the service, one of the ministers asked folks to hold those symbols high for all to see.

So the next time you’re tempted to lose hope . . .

Remember that little boy holdin up an umbrella,

when the Israelites walked through that valley on the day they returned to the Promised Land!