Thank you to the many people who attended the ONA presentation shared by guest speaker Keith West on Sunday, January 12. There was good information about inclusive language and correct terminology, LGBTQ+ history, Biblical references, and current statistics. Keith was an enthusiastic and engaging presenter! His PowerPoint presentation is presented below. If you have follow-up questions, please let us know! ~Lynn Horton for the CCC ONA Ministry Group 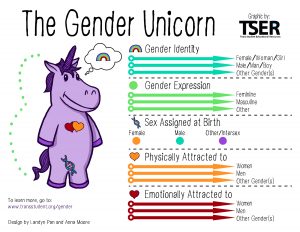 Other terms to know
❖ Cis-gender – someone whose gender identity matches the gender they were assigned at birth ❖ Gender-fluid – someone whose gender identity fluctuates. ❖ Transvestite – Outdated term. “Crossdresser” more preferred. Someone who commonly dresses as a gender other than the one they identify as. Drag Queen/Kings are the classic example. NOT the same as Transgender ❖ “Transgendered” – NO. Insulting. Do not use. ❖ Pronouns – Ask people what pronouns they use. Default to “They,” never “it.”

❖ 1973 – APA removes homosexuality as a disorder in DSM-II

❖ 2017 – Trump announces via twitter than transgender troops will be banned from serving openly.  ➢ Joint Chiefs of Staff are all on record saying trans troops pose no threat to military readiness/effectiveness.  ➢ Policy is revised several times

❖ EEOC guidance currently says that for federal jobs this applies to sexual orientation and gender identity.

❖ In 26 states it is legal to fire someone because of their perceived sexual orientation or gender identity.

❖ Multiple States are considering bills requiring students to use bathroom matching the gender they were assigned at birth.

❖ Facts ➢ ~1.4 million trans people in the US  ➢ In 15 years only 1 alleged sex crime in bathroom/changing room by trans person  ➢ 150+ Instances by un-disguised cis-gender men  ➢ Trans people much more likely to be assault victims than perpetrators ➢ Sexual assault rate rose in schools with this bathroom policy  ➢ No increase in assaults in cities with anti-discrim bathroom laws

❖ Differences among Christian Denominations – Some view any non-straight identity as a sin (Southern Baptist, Missouri Synod Lutheran, many Pentecostal) – Others more open to different identities (ELCA, Episcopalians, some factions of other denominations)

– Book of Ruth – Ruth and Naomi (Often interpreted as lesbians)

❖ Things Jesus said about Love – Lots. – Especially about those who are downtrodden or oppressed. ❖