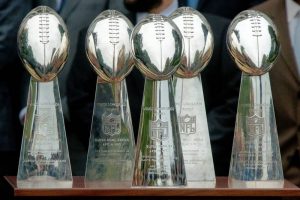 Not that I have already obtained this or have already reached the goal; but I press on to make it my own, because Christ Jesus has made me his own. Beloved, I do not consider that I have made it my own; but this one thing I do: forgetting what lies behind and straining forward to what lies ahead, I press on toward the goal for the prize of the heavenly call of God in Christ Jesus.

You may be surprised to learn that St. Paul was a huge sports fan. I’m not just making this up for Super Bowl Sunday! In this passage from Philippians he uses the image of a runner straining forward at the finish line to win a race.

. . . forgetting what lies behind and straining forward to what lies ahead, I press on toward the goal for the prize of the heavenly call of God in Christ Jesus.

2 Timothy 2:5 – An athlete is not crowned unless he competes according to the rules.

1 Corinthians 9:24-27 – “Do you not know that in a race all the runners run, but only one gets the prize? Run in such a way as to get the prize. Everyone who competes in the games goes into strict training. They do it to get a crown that will not last; but we do it to get a crown that will last forever. Therefore I do not run like a man running aimlessly; I do not fight like a man beating the air. No, I beat my body and make it my slave so that after I have preached to others, I myself will not be disqualified for the prize.” (NIV)

2 Timothy 4:7-8 – I have fought the good fight, I have finished the race, I have kept the faith. Henceforth there is laid up for me the crown of righteousness, which the Lord, the righteous judge, will award to me on that Day.

Acts 20:24 – However, I consider my life worth nothing to me; my only aim is to finish the race and complete the task the Lord Jesus has given me—the task of testifying to the good news of God’s grace.

Ephesians 6:12 – For we wrestle not against flesh and blood, but against principalities, against powers, against the rulers of the darkness of this world, against spiritual wickedness in high places. 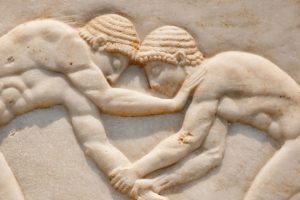 I find it very reassuring that the great St. Paul was a huge sports fan! We can watch guilt-free tonight! I also find it exciting that the Apostle Paul found the world of sports to be filled with helpful images that can be used to teach people of faith.  (That’s very validating for me! Hey, we’re called to emulate the saints, right?)

You know, lately I’ve been trying to preach about things we’ve all been thinking about and talking about, even though in today’s world it’s risky. And so today on this Super Bowl Sunday, as the Patriots go for their 6th Super Bowl win, I thought I’d speak just briefly on the subject,

“Lessons learned from the Dynasty!”

(I’ve been preaching for over 35 years. This is a first. But hey, if St. Paul could do it I can do it, and they put his sports analogies in the Bible! ) 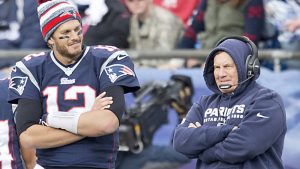 But let’s be honest, they’re not perfect.

So, Brady & Belichick are not perfect. I kind of like that about that. They’re great examples that sometimes are greatest strengths can become a weakness. They are driven and competitive like few other people on the planet, but sometimes their competitive nature gets them in trouble when they take it too far. Brady sometimes chews out teammate and coaches in front of the cameras, which is not good. Belichick is so rude to reporters at his press conferences. He never wants to stir up controversy, but he’s so rude and dismissive with reporters. So, they’re not perfect, but they are amazing.

Here’s a few lessons we can learn from them.

Brady & Belichick are just as motivated and driven today as they were at that first Super Bowl 16 seasons ago. They’ve already done things no one has ever done in football. In the past 16 years they’ve gone to half of all the Super Bowls played. The only athletes you can now compare Brady to are people like Michael Jordan, Wayne Gretzky, Serena Williams and Jack Nicklaus.

But Brady never stops trying to get better. Three years ago he decided that he could elevate his game if he learned to roll out of the pocket to throw, given himself more time. But Brady has always been a slow runner. Who gets quicker and more mobile at age 37? Tom Brady.

The key to their sustained excellence is always trying to get better. Isn’t that what we’re called to do, too? Aren’t we supposed to grow and grow more into the image of Christ our Savior? To be a Christian is to be committed to growing.

2 Peter 3:18 – but grow in the grace and knowledge of our Lord and Savior Jesus Christ.

Ephesians 4:15-16 – Rather, speaking the truth in love, we are to grow up in every way into him who is the head, into Christ

Colossians 1:10  –  walk in a manner worthy of the Lord, fully pleasing to him, bearing fruit in every good work and increasing in the knowledge of God.

We’re called to grow in our faith, in our knowledge, in our love, in our service! 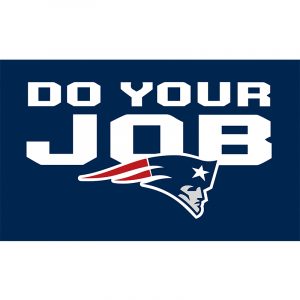 You will seldom find a more cohesive organization than the Patriots. They always seem to be on the same page. Their motto as you know is “Do Your Job.” They fill the roster with guys that understand that.

Ex. Jamie Collins. – was “a freak of an athlete” but he didn’t do his job. He free-lanced, and didn’t work hard enough. So they did the worst thing you could ever do to an NFL player – they traded him to the Cleveland Browns.

They have linebackers playing today who aren’t half as athletically gifted as Collins, but they understand what it means to do your job on a team. Teamwork’s important in the church, isn’t it? Listen to St. Paul:

Ephesians 4:15-16 –  But speaking the truth in love, we must grow up in every way into him who is the head, into Christ, from whom the whole body, joined and knit together by every ligament with which it is equipped, as each part is working properly, promotes the body’s growth in building itself up in love.

Teamwork is all of us “joined and knitted together” each one doing their part for the health of the Body of Christ. Having a common goal of serving God & serving others, and finding our role, doing our jobs for the common good, for God – that’s what it’s all about, isn’t it?

Illustration. A few years ago I was at a pastor’s conference at the Willow Creek Church, in Barrington IL. They’re one of the largest churches in the county, and they have a very clear mission statement: “Turning Irreligious People into Fully Devoted Followers of Christ.”    During a break at the conference, I struck up a conversation with one of the custodians.

“You have a big job,” I said. “This is a huge facility & it all looks so beautiful.”

He replied, “Hey, it’s all about, ‘Turning Irreligious People into Fully Devoted Followers of Christ.’”

When the custodian can quote the mission statement, you know you’re doing something right! You know you’ve forged a cohesive team, like our Patriots.

Here’s one more lesson from the Champs. 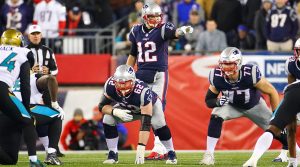 In fact, they’re often at their best under adversity. Brady’s at his best when the game is on the line. You know that they have a lot of come from behind wins? That’s because teams throw crazy defensive schemes against them, and it often takes the first half to figure it out. But they never give up!

Another example is the fact that the Deflate-gate story broke after the AFC Championship game in 2015. Guess what happened 2 weeks later? The Patriots won the Super Bowl!

Well, thanks for your attention. I didn’t pick this topic just because I love talking football. I picked it because we really can learn a lot from this remarkable organization, especially it’s leaders.

Our Leader is Jesus Christ.

He never played football, but he was tough and tender. He was at his best when his life was on the line.

“Father, forgive them for they know not what they do.”

“Truly you will be with me in paradise.”

Jesus knew what his calling was, and so he never stopped loving – even on the Cross.

Let’s sing about his love. Our Communion Hymn is “In Remembrance of Me.”