Also, as I read this please take note of the various reactions to the site of Christ’s tomb being empty.

Early on the first day of the week, while it was still dark, Mary Magdalene came to the tomb and saw that the stone had been removed from the tomb. So she ran and went to Simon Peter and the other disciple, the one whom Jesus loved, and said to them, “They have taken the Lord out of the tomb, and we do not know where they have laid him.” Then Peter and the other disciple set out and went toward the tomb. The two were running together, but the other disciple outran Peter and reached the tomb first. He bent down to look in and saw the linen wrappings lying there, but he did not go in. Then Simon Peter came, following him, and went into the tomb. He saw the linen wrappings lying there, and the cloth that had been on Jesus’ head, not lying with the linen wrappings but rolled up in a place by itself. Then the other disciple, who reached the tomb first, also went in, and he saw and believed; for as yet they did not understand the scripture, that he must rise from the dead. Then the disciples returned to their homes.

But Mary stood weeping outside the tomb. As she wept, she bent over to look into the tomb; and she saw two angels in white, sitting where the body of Jesus had been lying, one at the head and the other at the feet.They said to her, “Woman, why are you weeping?” She said to them, “They have taken away my Lord, and I do not know where they have laid him.” When she had said this, she turned around and saw Jesus standing there, but she did not know that it was Jesus. Jesus said to her, “Woman, why are you weeping? Whom are you looking for?” Supposing him to be the gardener, she said to him, “Sir, if you have carried him away, tell me where you have laid him, and I will take him away.” Jesus said to her, “Mary!” She turned and said to him in Hebrew, “Rabbouni!” (which means Teacher). Jesus said to her, “Do not hold on to me, because I have not yet ascended to the Father. But go to my brothers and say to them, ‘I am ascending to my Father and your Father, to my God and your God.’” Mary Magdalene went and announced to the disciples, “I have seen the Lord”; and she told them that he had said these things to her.

Tony Campolo is one of my favorite preachers. Tony’s an itinerant preacher and a sociologist. Years ago he taught at the University of Pennsylvania. One class he taught was called, “Existentialism & Sociology” Gee, I sure wish my college had a course like that (Not really!). On the first day of class, Tony looked at a student sitting in the first row and said, “I have a question for you. How long have you been alive?” “I’m 21,” replied the student. Tony said, “That’s how long your heart has been beating, but how long have you truly been alive while being on this earth?”

Tony then told the story of a time he was on a 9th grade class trip to New York City, and his class went to the top of the Empire State Building. Tony walked over to the edge of the building, leaned on the railing, looking out at the magnificence of the skyscrapers of New York City. He said it was a magical, mystical moment where he took it all in and absorbed the city. And for that moment he felt truly alive. 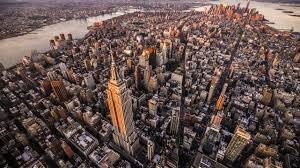 I’ll bet you’ve had a few moments like that, where every fiber of your being felt truly alive.

When Dr. Campolo finished telling that story he again asked the student how long he had been alive.

“When you put it that way, Doc. Maybe just a couple of minutes. It’s hard to say. Most of my life has been just the passage of time, with too few moments of genuine aliveness.”

“Too few moments of genuine aliveness.” How long have you lived, truly lived?

Dr. Campolo writes: “God wants for us to be more alive to life, and to grasp all of its glorious potentialities!” 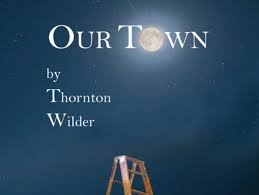 Illustration. In Thorton Wilder’s classic play, “Our Town,” the main character, Emily, discovers too late the joy and importance of being fully alive. After she has died in the play she asks the spirits to let her go back and take one last look at her life. She’s allowed to look at one day. She chooses her 12th birthday.

Emily looks at the scene of her birthday gathering, and she realizes how little the people she loves really comprehend the joy and depth of living. She’s so upset by this that she pleads to be taken away. She can’t bear to watch it anymore. Before she leaves she says this:

Good-bye! Good-bye world. Good-bye, Grover’s Corners . . . Mama and Papa. Good-bye to clocks ticking . . . and Mama’s sunflowers, and food and coffee. And even ironed dresses and hot baths . . . sleeping and waking. O earth, you’re too wonderful for anybody to realize you.”  She pauses and then asks with tears in her eyes, “Do any human beings ever realize life while they live it? Every minute?”

If any group of people should, “realize life while they live it,” it should be Easter People, people who’ve been touched by the power of the Resurrection of Christ!

Think how fully alive Mary was, once she heard Jesus speak her name.

Think how fully alive Peter and John became once they met the Risen Christ. The world hasn’t been the same since. The Living Christ made them fully alive!

I think that’s what Paul was talking about in several of his letters. To the Romans he wrote: “Through your baptisms you have died with Christ; therefore just as Christ was raised from the dead, so too we might walk in newness of life” (Romans 6:4). We die with Christ by yielding our lives to God, and we rise like him to lead new lives. “Consider yourselves dead to sin and alive to God” (Romans 6:11).

In Ephesians 2 he wrote: “Even when we were dead in our sings, God made us alive together with Christ – and raised us up with him.”  (Eph. 2:5)

“Soar we now where Christ has lead!”

Christians (“Christ-ians”) are those who unite themselves to Christ. That why the New Testament uses the phrase, “in Christ.” We seek to live our lives in Christ, as Christ lives in us. We identify our lives with the life of Jesus Christ. We died to ourselves like Christ died on the Cross, and then we’re raised to new life, just as Christ was raised to new life on Easter Sunday!

Here’s a somewhat silly illustration, but I think it makes this point more clear. Through the years, Red Sox fans have deeply identified with their team. We are “Red Sox Nation.” This is not as true anymore, as many of us have been even more captured by the Patriots dynasty. But just a few years ago, New England rose and fell with the Sox. Mostly fell. So when the ball went through Bill Buckner’s legs in 1986, Red Sox nation died a thousand deaths. Same in 2003 when Aaron Boone hit that home run. But in 2004 when Keith Foulke tossed the ball over to first base for the last out of the World Series, Red Sox nation rose to new heights! The celebration on the field was repeated over and over and over again throughout Red Sox Nation.  We died with them. We rose with them. That’s how much Sox fan identify with their team. If we only identity with Christ half as much we’d be in great shape spiritually! 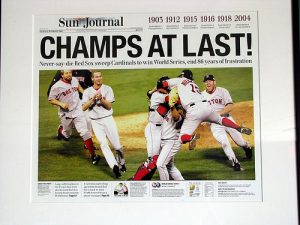 A great saint named Irenaeus once said, “The Glory of God is a human being fully alive!”

I want to be fully alive, don’t you?

B. I want to be alive to other people. I want to be fully present with others, fully engaged, focused and living in the moment with them, don’t you?

C. I want to be alive to life, to be fully alive in the moments and minutes of each day, don’t you? I want to “realize life while we live it.”

I’ll close with the words of my favorite college professor. His name was Dr. Nelvin Vos. He taught English and contemporary drama, and he was and is a vibrant, brilliant, faith-filled man. On the last day of class, Dr. Vos would always send us forth with this benediction:

“May you be alive every day of your life.”

And what better day to be fully alive than Easter Sunday!

Alive to God, Alive to each other, Alive to life!

Lord Jesus, as you were raised from the dead, raise us to new life. Fill our souls, revive our spirits, that we may be fully alive for you. Let this be a day and a moment of commitment to you and to life. Amen.

The church is a place where we practice being fully alive. We invite you to practice with us any time.

“The Glory of God is a human being fully alive!”

May you be alive every day of your life.

May you live as Easter People – alive to God, alive to others, alive to life!

And may the Grace of our Risen Savior, the Love of God our Creator, and the Joy and Power of the Holy Spirit be with you this day and forever. Amen.