John said to him, “Teacher, we saw someone casting out demons in your name, and we tried to stop him, because he was not following us.”  But Jesus said, “Do not stop him; for no one who does a deed of power in my name will be able soon afterward to speak evil of me.  Whoever is not against us is for us.  For truly I tell you, whoever gives you a cup of water to drink because you bear the name of Christ will by no means lose the reward. 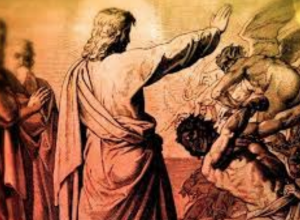 In ancient times, folks believed that most diseases were caused by evil spirits. Therefore if you cast out the evil spirit/demon, the person would be cured. One of the most common ways to cast out a demon was to invoke the name of a more powerful spirit. The idea was that the more powerful spirit would win and thus serve the eviction notice to the demon.

Jesus, as you know, had quite a reputation as a healer and exorcist. His name was therefore very powerful in peoples’ eyes. That’s why this other healer was using the name of Jesus to cast out demons. However, he wasn’t a member of the original 12 disciples. So the disciples wanted him to stop.  But Jesus said, “Don’t stop him. He who is not against us is for us.”

It’s a call to tolerance, open-mindedness, and inclusiveness

It’s also a call to “Both/And” Thinking, instead of “Either/Or” Thinking.

The disciples were stuck in Either/Or.

We religious people have a long history with “Either/Or” Thinking.

You’re either a true believer or you’re not.

Either you’re a biblical Christian as I define it, or you’re not.

You’re orthodox in your beliefs, or you’re a heretic and should be burned at the stake. 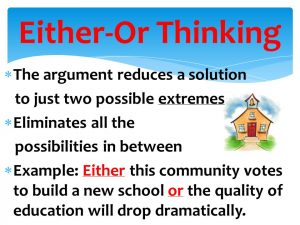 Of course, religious people aren’t the only ones who’ve struggled with Either/Or thinking.

There’s a tendency of all people to simplify things and put people in nice (actually not-so-nice), neat, little categories –

NRA supporter or You wanna take away all our guns! 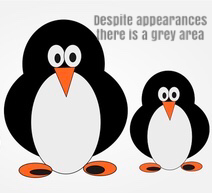 Either/Or is too simplistic. It’s too black & white.

Both/And suggests that we both have something to offer.

Believe it or not, the early Church had to wrestle with this issue.

Another example is in I Corinthians 1. Paul senses division in the church at Corinth.“Some follow Paul. Some follow Apollos.”  Paul says, No worries. I planted. Apollos water, but God produces the growth. Both of us have our roles. It’s a both/and, not an either/or.

I did a both/and a few years ago (I usually don’t tell stories where I did something exemplary. Forgive me). It was an easy decision but many of you said some very kind words about it. I knew Pastor John before coming to Chelmsford, and so I invited he & Shirley back to the church after being here for 2 or 3 months. John decided to give me a year with you all before returning. I didn’t think twice about the invitation, because it’s not an either/or. It’s a both/and. You can love Shirley and love my wife Alisa at the same time! There’s enough love to go around! And, you can love Pastor John and like, love, or at least tolerate me, too, at the same time. It’s both/and!

Here’s a few other examples of Both/And Thinking.

Science & Religion.  – you can love both! You don’t have to make an either/or choice.

Faith & Doubt. – they actually go together, it’s not either/or.

Some people feel that if they have doubts, they’re not a true believer. That’s either/or!!! Faith will always include some doubt. That’s why it’s called faith!

Can you be a fully devoted follower of Christ and still affirm the value and even spiritual truth in other religions? Of course, you can! It’s not either/or! 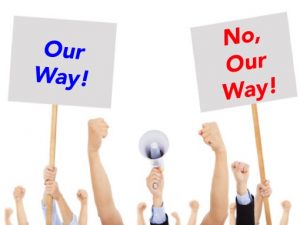 Years ago, I used to sing with another pastor named Gary. Gary was a terrific musician. He played the keyboard and had a natural gift for singing harmony. We were quite big on the spaghetti supper/mother-daughter banquet circuit in our small part of Pennsylvania!

One day I suggested to Gary that we perform the song, “The Best,” by Bob Bennett. We both listened to the song at our homes for a week to learn it, but we listened to different recordings by two different artists. I listened to an upbeat version by Dion Dinucci. Gary listened to the original version by Bob Bennett. I loved the upbeat version (slow music drives me crazy!). Gary loved the slow version because you could hear the harmonies. We had our first argument over the song! It was a lousy rehearsal and we almost scrapped the song (and our duo!). He really wanted it slow, and I really wanted it fast. It had to be either/or. Finally, by some miracle of grace, we realized we could meet in the middle and sing it fast enough to be interesting but slow enough to hear his harmony. We achieved a both/and. And “The Best” became one of the best songs we ever sang.

One last example, take a look at this chart. It’s a wonderful example of both/and thinking. You can support good policemen & policewomen. You can affirm the truth that Black Lives Matter, and you can support reforms in policing to combat police brutality. It’s both/and! 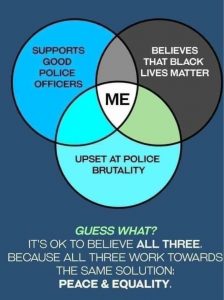 In Closing, think about these two ways of thinking this week.

Monitor your mindset, and strive first for Both/And.

I think you’ll find that it leads to more peace, better relationships and even wiser decisions.

Here’s a link to hear Bob Bennett’s song, “The Best”