I like for us to think about hope this morning. Hope is essential in our lives. Everything that gets done in this world starts with hope. Hope is the ignition, the spark that gets things moving. With hope, almost anything is possible. Without hope, nothing gets done. We are hopeless.

Easter is about many things. Certainly, one of them is hope. Let’s take a look.

But on the first day of the week, at early dawn, they came to the tomb, taking the spices that they had prepared. 2They found the stone rolled away from the tomb, 3but when they went in, they did not find the body. 4While they were perplexed about this, suddenly two men in dazzling clothes stood beside them. 5The women were terrified and bowed their faces to the ground, but the men said to them, “Why do you look for the living among the dead? He is not here, but has risen. 6Remember how he told you, while he was still in Galilee, 7that the Son of Man must be handed over to sinners, and be crucified, and on the third day rise again.” 8Then they remembered his words, 9and returning from the tomb, they told all this to the eleven and to all the rest. 10Now it was Mary Magdalene, Joanna, Mary the mother of James, and the other women with them who told this to the apostles. 11But these words seemed to them an idle tale, and they did not believe them. 12But Peter got up and ran to the tomb; stooping and looking in, he saw the linen cloths by themselves; then he went home, amazed at what had happened.

36While they were talking about this, Jesus himself stood among them and said to them, “Peace be with you.” 37They were startled and terrified, and thought that they were seeing a ghost. 38He said to them, “Why are you frightened, and why do doubts arise in your hearts? 39Look at my hands and my feet; see that it is I myself. Touch me and see; for a ghost does not have flesh and bones as you see that I have.” 40And when he had said this, he showed them his hands and his feet. 41While in their joy they were disbelieving and still wondering, he said to them, “Have you anything here to eat?” 42They gave him a piece of broiled fish, 43and he took it and ate in their presence. 44Then he said to them, “These are my words that I spoke to you while I was still with you—that everything written about me in the law of Moses, the prophets, and the psalms must be fulfilled.”

Blessed be the God and Father of our Lord Jesus Christ! By his great mercy he has given us a new birth into a living hope through the resurrection of Jesus Christ from the dead. 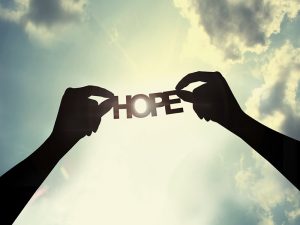 Peter did not come to this hope easily. These are not the words of someone who’s led a charmed life and never struggled or failed. Peter came to this living hope the hard way – through adversity and trials, through mistakes and grand failures. Of all the disciples, Peter had the most dramatic ups and downs. Peter either soared or sank. He either flew or flopped. Here’s three quick examples.

Peter was the disciple who first articulated that Jesus was the Messiah – “You are the Christ, the Son of the Living God.” Jesus replies, “Peter, God My Father has revealed this to you.” But just a few verses (moments) later, Jesus is speaking about the fact that he will suffer and die, and Peter protests and says, “No way, Lord!” Jesus then says to Peter, “Get behind me Satan!” That’s quite a contrast – God speaking through Peter and then the Enemy speaking through Peter. Yikes! 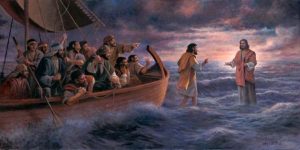 Then there was the time the disciples were in a boat out on the Sea of Galilee. It was nighttime and it was foggy. They look out and see what appears to be Jesus, but most think it’s a ghost. Peter says, “Lord, if it’s you, let me come to you.” Jesus must have nodded yes because gets out of the boat and starts walking on the water. Very soon though he looks around at all the waves, takes his eyes off Jesus and sinks. We usually focus on that lesson – don’t take your eyes off Jesus. But he did take 3 steps on the water! That’s 3 more than me. How bout you?

Peter’s biggest failure came just after the Last Supper. At that supper Jesus told the disciples that one of them would betray him. Peter said, “Not I, Lord. I’ll be with you no matter what.” But before the sun came up, three times Peter denied that he ever knew Jesus.

All hope was gone . . . . at least on Friday and Saturday. But on Sunday, on that first Easter Sunday, Hope got up! It looked like Hope was down for the count. But Hope got back up.  Hope was raised when Jesus was raised! Hope was resuscitated when Jesus was! Hope blasted out of that tomb to victory and freedom! And that’s where Peter found his Hope. Listen to his words again:

Blessed be the God and Father of our Lord Jesus Christ! By his great mercy he has given us a new birth into a living hope through the resurrection of Jesus Christ from the dead. 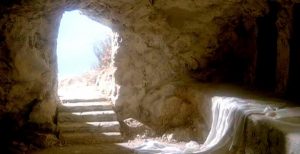 Let me close with two illustrations about having hope when it’s hard to have hope. That of course is when we need hope. We don’t need hope on the mountaintop taking in a gorgeous view. We need hope in the valleys of our lives, when things are dark and we can’t find out way. 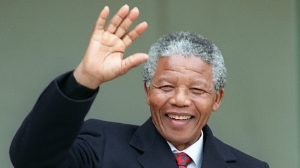 Nelson Mandela, the great South African leader was imprisoned for 27 years. He had not seen his daughter, Zeni, for more than 20 years, when she was granted visitation privileges. She arrived with her husband and their newborn daughter. There’s a South African custom that the grandfather names the child. Mandela gave his granddaughter the name, Zaziwe. Zaziwe in the South African language means “hope.” Even in prison, Mandela had hope for his family, his people, his nation. It was a hope that never left him. That’s the kind of hope the Christian is to have, based on this day – Easter. It’s a Living Hope based on the Living Christ.

Illustration. The Missionary, the People and the River.

Max Lucado tells the story of a missionary serving in a small, remote village in the jungle. The people of that village contracted a highly contagious and fatal disease. But the missionary knew that there was medicine to cure the disease at a clinic in another part of the jungle. He had to get the villagers to the clinic to receive the medicine. But to get there they had to cross a river that the men and women of the village felt was filled with evil spirits. The missionary tried to convince them otherwise. Eventually he took them all down the river’s edge, and much to their horror, he jumped in. He splashed water all over himself to show them that there was nothing to fear. Then in a very dramatic move he turned and faced the other side and he dove under, swimming to the other shore. He emerged with his arms held high . . . . . and they cheered. Then they joined him and followed him to their healing.

I’m not sure where we are in this current crisis. We’re probably in the middle of that river. But we will get to the other side, because on Easter Sunday Jesus got up on the other side.

Lord Jesus, give us that hope that comes from You! 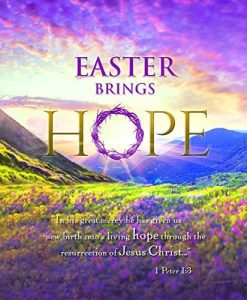