So far this month, we’ve looked at David & Saul, with David playing his music to sooth the King. We’ve looked at David & Goliath and David’s creativity in taking down the Giant. Last week we studied David & Jonathan and their beautiful friendship. Today – David & Bathsheba.  – a very different story.

The “And’s” are important in life, aren’t they? We’re relational beings. It’s what life is all about. And it’s in living in relationship with others that our characters are revealed.

In the spring of the year, the time when kings go out to battle, David sent Joab with his officers and all Israel with him; they ravaged the Ammonites, and besieged Rabbah. But David remained at Jerusalem. 2It happened, late one afternoon, when David rose from his couch and was walking about on the roof of the king’s house, that he saw from the roof a woman bathing; the woman was very beautiful. 3David sent someone to inquire about the woman. It was reported, “This is Bathsheba daughter of Eliam, the wife of Uriah the Hittite.” 4So David sent messengers to get her, and she came to him, and he lay with her. (Now she was purifying herself after her period.) Then she returned to her house. 5The woman conceived; and she sent and told David, “I am pregnant.”

6So David sent word to Joab, “Send me Uriah the Hittite.” And Joab sent Uriah to David. 7When Uriah came to him, David asked how Joab and the people fared, and how the war was going. 8Then David said to Uriah, “Go down to your house, and wash your feet.” Uriah went out of the king’s house, and there followed him a present from the king. 9But Uriah slept at the entrance of the king’s house with all the servants of his lord, and did not go down to his house. 10When they told David, “Uriah did not go down to his house,” David said to Uriah, “You have just come from a journey. Why did you not go down to your house?” 11Uriah said to David, “The ark and Israel and Judah remain in booths; and my lord Joab and the servants of my lord are camping in the open field; shall I then go to my house, to eat and to drink, and to lie with my wife? As you live, and as your soul lives, I will not do such a thing.” 12Then David said to Uriah, “Remain here today also, and tomorrow I will send you back.” So Uriah remained in Jerusalem that day. On the next day, 13David invited him to eat and drink in his presence and made him drunk; and in the evening he went out to lie on his couch with the servants of his lord, but he did not go down to his house.

14In the morning David wrote a letter to Joab, and sent it by the hand of Uriah. 15In the letter he wrote, “Set Uriah in the forefront of the hardest fighting, and then draw back from him, so that he may be struck down and die.” 16As Joab was besieging the city, he assigned Uriah to the place where he knew there were valiant warriors. 17The men of the city came out and fought with Joab; and some of the servants of David among the people fell. Uriah the Hittite was killed as well.

26When the wife of Uriah heard that her husband was dead, she made lamentation for him.27When the mourning was over, David sent and brought her to his house, and she became his wife, and bore him a son. But the thing that David had done displeased the Lord.

David & Bathsheba. It’s one of the most well-known stories in all the Bible.

In the church I grew up in we had a fun, crazy Sunday School teacher in high school, named Jackie Landis. She was awesome, much like our Steve & Will, just fun to be with! One day Jackie said to our class of mostly boys, “You guys should really read the Bible. It’s got everything in it – great stories about families, friendship and supernatural stuff. It has battles, conflicts, deception, love stories, and sex.” Jackie knew how to get teenage boys to read their bibles.

I think I wanted to start with a laugh this morning, because this is one of the saddest stories in all the Bible. And it goes from sad to sadder, from deceit to murder.

King David is the St. Peter of the Old Testament, but in a more extreme way. When David shined, he really shined. And when he blew it, he really blew it. And that’s putting it extremely mildly.

Like most good stories we get a clue right away that David is no longer the great man he once was. The story-teller begins by telling us that this event happened in the spring, when Kings usually went off to make war. If an enemy nation had expanded their territorial holdings in the winter, spring was the time to deal with it. And who was the greatest warrior Israel had ever seen? David. Last week’s text said, young David was successful wherever he went, and Saul made him commander over the entire Israelite army. 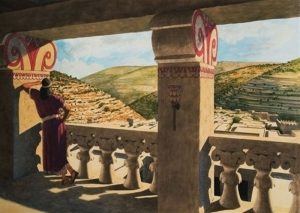 But now years later, the Super Warrior is a Super Couch Potato!”  He’s lying on the couch in the late afternoon – no doubt with a big bowl of chips in his lap, complaining that he can’t find anything good to watch on TV. So he decides to take a walk on the roof of his palace. How long of a walk can you really take on a roof? It’s an image of man going nowhere fast! Just pacing back and forth . . . .  until he sees the gorgeous Bathsheba taking a bath.

When I was growing up, my pastor had a line about lust I’ve never forgotten. He said, “If you’re driving down the street and you see a beautiful woman and you notice that she’s a beautiful woman, that’s not lust. But if you drive around the block to see her again, that’s probably lust.”

This may explain David spending so much time up on that roof. He’s going nowhere fast, and he’s about to take a detour he should avoid. Sometimes in decision-making we would do well to ask ourselves, does this course of action make me more who I’m meant to be, or less who I’m meant to be? David is a Warrior (in a time where warriors were needed) and he’s a leader of men. But the conquest he’s about to make, will not make him more who’s he meant to be. It will make him less.

David summons her and she comes. One of the other translations says, “Then David sent messengers, and took her.”   How romantic. He “took” her.

These last few weeks we’ve all been stunned at the Harvey Weinstein story, the movie mogul/predator.  It’s absolutely disgusting, with 50-60 women now saying he did grossly inappropriate things. What the David & Bathsheba story and the Weinstein story have in common is the imbalance in power. King David had all the power, and could summon anyone to his quarters. Weinstein was King of his movie company, and he too preyed on young beauties. And could never get enough, never satisfied.

Do you know that David already had at least 9 wives before Bathsheba? Severn are mentioned by name, and then it says he had gone to Jerusalem and “took more wives.” All this taking and taking and taking! Men using women as objects, things, merely something for their own pleasure.

When I was in my 20s I touched on this subject in a sermon. I even read an account of a rape in the Bible (Tamar in II Samuel 13). I was stunned at the profound sadness in the room, and by the number of women who told me they had been inappropriately touched or harassed, assaulted or molested.

A. The most often statistic that I’ve seen is 1 in 5 women report being sexually assaulted in their lifetimes.

C. An ABC News-Washington Post poll released this week found that more than half of American women say they have been on the receiving end of “unwanted and inappropriate sexual advances,” with 30 percent coming from men they worked with. The top emotion they felt about these advances was anger, according to the poll. The second-most frequent reaction was feeling intimidated. That’s the imbalance of power.

As I’ve lived with this passage all week, as well as kept up with the news, I’ve been struck by this thought – how far have we really come? David summoning Bathsheba to his quarters seems identical to Weinstein inviting aspiring young actresses up to his hotel room. It also reminds me of the actions of Roger Ailles, Bill O’Reilly, Bill Clinton & JFK, and Bill Cosby.

The actress Alyssa Milano, started a “Me, Too” movement on Facebook, urging women who’ve experienced sexual harassment and other inappropriate behavior. Within the first 24 hours there were more than 12 million posts, according to Facebook — and more than 45 percent of Facebook users in the U.S. were friends with someone who had posted, “Me, Too.”

If there’s any hope in all this is the sheer number of women speaking up and the number of prominent women coming forward. In addition to Alyssa Milano, there’s Gwyneth Paltrow, Ashley Judd, Angelina Jolie, Lupita Nyong’o, Mira Sorvino, Jennifer Lawrence and Olympic gymnast McKayla Maroney spoke out this week that she was one of the gymnasts assaulted by the team doctor (starting at age 13.)

Of course we men need to speak out as well, challenging our male friends when they speak or act inappropriately.

Let me close with some lessons learned from story of David & Bathsheba:

David & Bathsheba’s relationship eventually produces the next King, Solomon (their child from this initial affair dies soon after he was born, but they conceive again and Solomon is born, II Samuel 12). So even though their relationship had a scandalous beginning, it led to something good. Solomon becomes known as the wisest man who ever lived. He wrote the Book of Proverbs, Ecclesiastes, Song of Solomon. Israel reached the heights of its power and influence under King Solomon.

You see, God’s grace is greater than our mistakes.

God can bring light out of darkness and good out of our messes.

There are messes in Hollywood and elsewhere.

But God’s light is starting to shine through.

If this topic hits home and hits deep for you, my advice is to tell someone. Don’t keep it inside. There is power and freedom in saying, “Me, Too.” Please give me a call if you’d like to talk.