The world’s most famous Christmas carol debuted 200 years ago tomorrow night. The year was 1818. The town was Oberndorf, Austria – 11 miles north of Salzburg, Austria. (Salzburg is the birth place of Mozart, and also where most of “The Sound of Music” was filmed.) 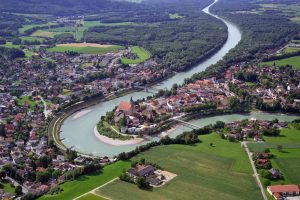 His father, Franz Mohr, was a mercenary soldier who abandoned Joseph’s mother while she was pregnant with Joseph.  (So if you think you have to come from a perfect family to accomplish anything in this world, think again!) 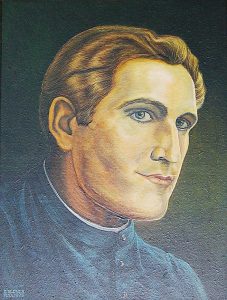 As a youth, Mohr had impressed the vicar at the Salzburg Cathedral with his musical skills as a singer and violinist. So the vicar arranged for him to get a good education.

Because Joseph was of illegitimate birth, special dispensation was required for him to attend seminary. He was ordained a priest in 1815 and assisted at two churches for a brief time. He was named an assistant priest at St. Nicholas church in 1817.

Well, in 1818 at Christmas time, legend has it that the pipe organ at the church was broken. The church sat right along-side a river that often flooded, and when it flooded water would flow into the church and make the organ unplayable.

Father Joseph Mohr was a bit of a poet. Two years prior in 1816, at the age of 24, Mohr had written a six-stanza poem Stille Nacht! Heilige Nacht! 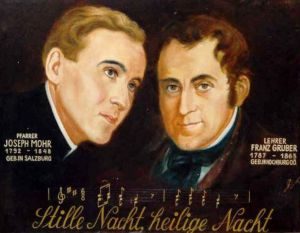 It’s said that on Dec. 24, 1818, he asked his friend Franz Gruber to create a melody for the poem. (others say he gave him the poem sometime in December, hoping to have a new song to sing on Christmas Eve)

Franz Gruber was a school teacher in the town and the choir master and organist at the St. Nicholas Church. Gruber & Fr. Mohr sang “Silent Night” for the first time at Christmas Eve Mass, Dec. 24, 1818.

Fr. Mohr played his guitar, and the choir repeated the last two lines of each verse.  (“Sleep in heavenly peace”)

The carol spread quickly across Europe. Two travelling families of folk singers, the Strassers and the Rainers, included “Silent Night” in their shows. (They were like the Von Trapp Family Singers 100 years before them.)

In 1834, Silent Night was performed for King Frederick William IV of Prussia, who then ordered his cathedral choir to sing it every Christmas Eve. Tradition-not to be sung until12/24!

Twenty years after “Silent Night” was written, the song was brought to the United States by the Rainers, who sang it at New York City’s Trinity Church. Silent Night is now sung in more than 300 different languages around the world.

A few other quick notes about Fr. Joseph Mohr.

He was a very generous man who donated most of his salary to charity. He remained in Oberndorf for only a year more, until 1819. As a priest he was moved from place to place. In the final town he served he created a fund to allow children from poor families to get a good education, and he set up a system for the care of the elderly.

Joseph Mohr & Franz Gruber wrote only one other song that we know of, and no one’s ever heard of that song.  So, this basically makes Silent Night the Ultimate One-Hit Wonder! (Christmas is actually filled with One Hit Wonders, songs by composers who were never heard from again. Hey, it’s better to have one big hit than none at all, especially if it’s sung by millions of people every year!)

Gruber was more of an arranger than a composer, and he wrote arrangements of many carols for choirs and orchestras.

St. Nicholas Church is no longer standing, but the “Silent Night Chapel” in Oberndorf today marks the spot where the church once stood. Every year they live-stream their 5:00 pm Christmas Eve service all around the world and Silent Night is sung in many languages. 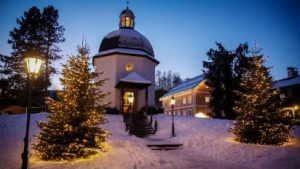 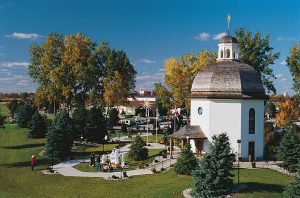 Let’s take a look at the lyrics.

Which lines jump out and you and why?

He is the image of the invisible God, the firstborn of all creation; for in him all things in heaven and on earth were created, things visible and invisible, whether thrones or dominions or rulers or powers—all things have been created through him and for him. He himself is before all things, and in him all things hold together. He is the head of the body, the church; he is the beginning, the firstborn from the dead, so that he might come to have first place in everything. For in him all the fullness of God was pleased to dwell, and through him God was pleased to reconcile to himself all things, whether on earth or in heaven, by making peace through the blood of his cross.

“In him all things hold together.” The little baby in the manger is still holding all things together. How do you wrap your brain around that! 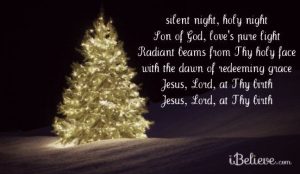 “The Dawn of Redeeming Grace” is also one of my favorite phrases, because Jesus ushered in the age of grace, where we come to learn that God’s love for us is simply a gift and not something we have to earn. And that knowledge is transforming, it changes and redeems our lives! It’s not just grace. It’s Redeeming Grace! 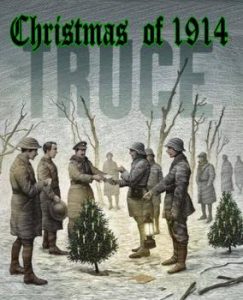 I’d like to tell you a story about Silent Night that comes from WWI. It’s often called, “The Christmas Truce.”

(What follows comes from the Web sites of the History Channel, the BBC, the CBC and Smithsonian.com. I have heard and read of this story for years, but was heartened to read of various accounts from quite reliable sources.) 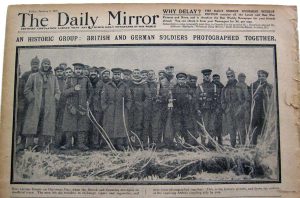 As Christmas approached in 1914 during WW I, “Political leaders on both sides had ignored the call of Pope Benedict XV to cease fighting around Christmas, but soldiers in the trenches decided to stage their own unofficial, spontaneous armistices anyway.”

Many first-hand accounts exist – from journals, letters, and interviews with soldiers from both sides. For example, Charles Brewer was a British Lt. on the front lines in Northern France. On Christmas Eve he looked across No-Man’s Land and saw a Christmas Tree on the German side, decorated with candles. (Christmas trees sent to front lines). Brewer then noticed the rising of a faint sound that he had never before heard on the battlefield—a Christmas carol. The German words to “Stille Nacht” were not familiar, but the tune—“Silent Night”—certainly was.

“When the German soldiers finished singing, their foes broke out in cheers . . . then the British replied in song with the English version of the carol.”

Stanley Weintraub, the author of Silent Night: The Story of the World War I, said it started in another location with a German officer, Walter Kirchhoff, a tenor with the Berlin Opera.

“He came forward and sang Silent Night in German, and then in English. In the clear, cold night of Christmas Eve, his voice carried very far.

“The shooting had stopped and in that silence he sang and the British knew the song and sang back.”

The song had a deep impact on many of the soldiers. “Soldiers … wrote home the day after to their families, to their wives, and to their parents, saying, ‘You won’t believe this. It was like a waking dream.'”

When dawn broke on Christmas morning, “in sporadic pockets along the 500-mile Western Front, unarmed German and Allied soldiers tentatively emerged from the trenches and cautiously crossed no-man’s-land . . . to wish each other a Merry Christmas.” 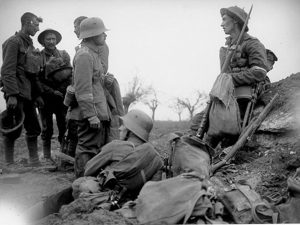 “We shook hands, wished each other a Merry Christmas and were soon conversing as if we had known each other for years,” said British Corporal John Ferguson.

“The soldiers exchanged makeshift gifts such as cigarettes, chocolates, sausages, liquor and plum puddings and likely swapped stories about the miseries of war.” 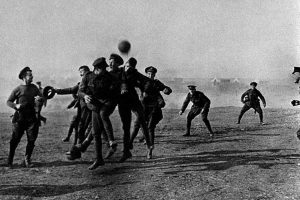 One soldier wrote in his journal, “I wouldn’t have missed the experience of yesterday for the most gorgeous Christmas dinner in England.”

And it seems in a number of cases up and down the front lines, “Silent Night” played a huge role in “The Christmas Truce.” 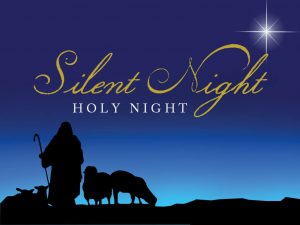