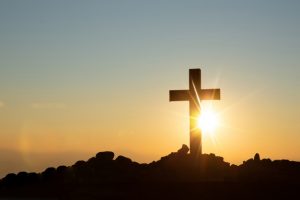 After the sabbath, as the first day of the week was dawning, Mary Magdalene

and the other Mary went to see the tomb. And suddenly there was a great earthquake; for an

angel of the Lord, descending from heaven, came and rolled back the stone and sat on

His appearance was like lightning, and his clothing white as snow. For fear of him the

guards shook and became like dead men. But the angel said to the women, “Do not be afraid;

I know that you are looking for Jesus who was crucified. He is not here; for he has been

raised, as he said. Come, see the place where he lay. Then go quickly and tell his disciples,

‘He has been raised from the dead, and indeed he is going ahead of you to Galilee; there you

will see him.’ This is my message for you.” So they left the tomb quickly with fear and great

joy, and ran to tell his disciples. Suddenly Jesus met them and said, “Greetings!” And

they came to him, took hold of his feet, and worshiped him. Then Jesus said to them, “Do

not be afraid; go and tell my brothers to go to Galilee; there they will see me.” 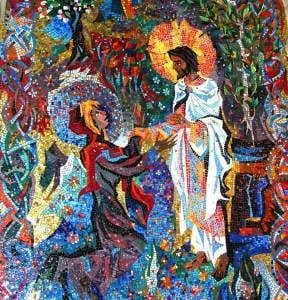 I was talking with a friend earlier in the week, and he asked how the plans for Holy Week were coming along. I said, “Pretty good. I’ve just got to finish my Easter message.” To which he replied, “Isn’t it the same every year? He got up! You can’t change the ending, Rich.”

He got up. That is the message. That is our reason to celebrate.

John Updike wrote about this in a poem entitled, “Seven Stanzas on Easter.”
(here are the first four stanzas)

Make no mistake: if he rose at all, It was as His body;
If the cell’s dissolution did not reverse, the molecule reknit,
The amino acids rekindle, The Church will fall.

It was not as the flowers, Each soft spring recurrent;
It was not as His Spirit in the mouths and fuddled eyes of the
Eleven apostles; It was as His flesh; ours.

The same hinged thumbs and toes, The same valved heart
That—pierced—died, withered, paused, and then regathered
Out of enduring Might, New strength to enclose.

Let us not mock God with metaphor,
Analogy, sidestepping, transcendence,
Making of the event a parable, a sign painted in the faded
Credulity of earlier ages: Let us walk through the door.

Let us not mock God with metaphor. He got up! He really got up.

Let’s reflect upon the significance of Jesus getting up.

When Jesus got up, so much else got up with him. For instance,

Hatred put Jesus in the tomb, but it was more than hated. It was largely fear that put him in the tomb, fear from those in power. Jesus had gained quite a following, and he wasn’t living by all their man-made rules. They became afraid of the Good News he was bringing. They were afraid of losing control.

Fear makes us look at the world through a strange lens.

“If I have to wear a mask, I’m submitting to government control!!! What next? Seat belts? Driver’s licenses?  The government’s out of control!!!

Illustration. I had a mentor for many years. He’s since passed, but he’s been very important to me. In his later years he looked out at the world and became very fearful. It didn’t look anything like the world he had grown up in. One day, probably 15 or more years ago, we were talking about gay marriage. At the time I was on the fence. My friend was very much opposed to it and said this: “Gay marriage is a threat to my marriage!” I asked, “How?” and he simply repeated his statement. It was then that I decided that I was for gay marriage, because how does the marriage of two committed, monogamous gay or lesbian folks have any impact on my marriage at all? Most of the non-acceptance of LGBTQ folks and minorities is based on fear – and irrational fears at that.

Fear put Jesus in the ground. But God wouldn’t let fear win! Love got up when Jesus got up.

2. Hope took a beating on Good Friday, didn’t it?

Hope was bruised, bloodied, and died. It looked like darkness and despair would win the day, and it did. But that was only Friday! As the famous preacher said, “Sunday was a-coming!”

We have our Good Friday moments, don’t we? –times of pain and struggle, suffering, loss and despair. And, we have our Holy Saturday moments—times of confusion and disbelief.

This pandemic has felt a lot like Good Friday and Holy Saturday. Loss after loss, death in the air, isolation, fear, and when will it end? That’s what it was like for the disciples–but Sunday’s a-coming! And on Sunday – Hope got back up when Jesus got back up.

Lies had entombed Jesus. – He does miracles by black magic! He tells the people not to pay taxes to Caesar! He breaks the Laws of Moses! Truth took a beating during Jesus’ life – all for political gain, so that those in power could stay in power. But Truth got back up on Easter Sunday! – when the Way, the Truth, and the Life got back up!

If there was ever a miscarriage of justice, it was the mock trial that condemned Jesus to death. But injustice didn’t have the last word, God did.

Theodore Parker, a Unitarian Minister, famously said: “The arc of the moral universe is long, but it bends toward justice.” If Jesus hadn’t gotten up, I’m not sure I would believe that. I think I’d say the universe is neutral at best. But since he got up, I’m compelled to believe it, and act on it!

Love got up; Hope got up; Truth got up; Justice got up. You know what else?

Imagine if Easter hadn’t happened? Think about that. The Son of God, God incarnate walks upon this earth. Teaches. Heals. Loves. And then he’s brutally killed and doesn’t get up. What would that say about God? Wouldn’t it mean that God had given up on humanity?

Illustration. You may have heard of a missionary named, Elisabeth Elliot. She’s quite famous in certain circles. In 1956 Elisabeth and her husband Jim felt called to be missionaries in Ecuador. They especially felt called to minister to a tribe of native Ecuadorians called the Waorani’s. They set up a base camp, and then Jim and four other men went deep into the jungle to make contact with the Waorani people. Their first contact seemed to go well, but there was quickly a miscommunication and all five of the missionaries were killed. Elisabeth grieved for her husband and then she did something amazing. In 1958 she went back to Ecuador. She stayed in a nearby village, and eventually made contact with the Waorani’s. Her interactions with them went so well that they invited her to live in their village. She shared the message of Christ with them and apparently was very much appreciated and loved by the people. The point is this: Elisabeth didn’t give up on the very people who had killed her beloved.  And neither did God. Jesus getting up again on Earth proves that!

John Updike was right – the power of Easter is in the bodily resurrection of Christ.

Let us not mock God with metaphor,
Making of the event a parable,
Let us walk through the door.

And that door is marked, “Resurrection” – and it leads to living the power of the Resurrection here and now!

Let’s close with a time of prayer, meditating on living the Power of the Resurrection.

What would it mean for you to live the Resurrection today? 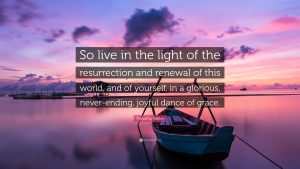