Our passage this morning features an angel. Angels are often pictured today as cute chubby infants with harps. The Book of Revelation has fierce angels who do the hard work of God.

And I saw another mighty angel coming down from heaven, wrapped in a cloud, with a rainbow over his head; his face was like the sun, and his legs like pillars of fire. 2 He held a little scroll open in his hand. Setting his right foot on the sea and his left foot on the land, 3 he gave a great shout, like a lion roaring. And when he shouted, the seven thunders sounded. 4 And when the seven thunders had sounded, I was about to write, but I heard a voice from heaven saying, “Seal up what the seven thunders have said, and do not write it down.” 5 Then the angel whom I saw standing on the sea and the land raised his right hand to heaven 6 and swore by him who lives forever and ever, who created heaven and what is in it, the earth and what is in it, and the sea and what is in it: “There will be no more delay, 7 but in the days when the seventh angel is to blow his trumpet, the mystery of God will be fulfilled, as he announced to his servants the prophets.”

The part that catches my eye is in vs. 4.

Revelation 10:4b –  I heard a voice from heaven saying, “Seal up what the seven thunders have said, and do not write it down.”

Why the command not to write it down?

Compare to Rev. 1:10-11 –  I was in the spirit on the Lord’s day, and I heard behind me a loud voice like a trumpet 11 saying, “Write in a book what you see and send it to the seven churches.

But here in Ch. 10 John is told specifically not to write down what he hears and sees. The implication seems to be that there are things that are beyond us this side of heaven. There are probably certain things we are better off not knowing about.

The Parkland School Shooting was in the news again this week. I was watching a recording of the evening news and saw that the shooter pled guilty. As soon as I realized what the story was I quickly fast forwarded through it because Maddie was in the room with me. I think it’s better that she not know all the details right now. It’s better for her not to think about such things. She seen enough fatality totals during the pandemic. That may be what this passage is referring to. It’s probably also that there are certain things that are just beyond our capacity to understand.

Illustration. It’s like when I’m talking with our Tech Wizards and they’re trying to explain their next project to me or how my computer works, and they see my eyes glaze over. I know exactly what they’re thinking in those moments: “Pastor Rich has no clue what we’re talking about right now.”

He heard things that no one else should hear – we’re just better off not knowing, or it’s simply beyond our human understanding.

What I like about these passages is that here in the Bible it’s being acknowledged that some things are simply beyond our grasp. I sometimes feel whimpy when I throw up my hands and say that, but if St. John and St. Paul can affirm that, then so can I. We see “dimly” as Paul said.  (I Cor. 13:12)

That’s why it requires faith.

Then the voice that I had heard from heaven spoke to me again, saying, “Go, take the scroll that is open in the hand of the angel who is standing on the sea and on the land.” 9 So I went to the angel and told him to give me the little scroll; and he said to me, “Take it, and eat; it will be bitter to your stomach, but sweet as honey in your mouth.” 10 So I took the little scroll from the hand of the angel and ate it; it was sweet as honey in my mouth, but when I had eaten it, my stomach was made bitter.

11 Then they said to me, “You must prophesy again about many peoples and nations and languages and kings.”

John hears a voice from heaven that tells him to take the little scroll from the Giant Angel and eat it. I’m glad the voices I heard about our new pulpit Bible said, “Dedicate it,” not “Eat it.” But we do talk about digesting a book, chewing on it for a while, taking it all in. The Bible is a book like that. It’s a book for us to digest – both the parts we like that are as sweet as honey, and the parts that challenge us. The Bible teaches about God’s love and grace and compassion. But the Bible also talks about evil in the world, and injustices to be battled, sacrifices to be made. We can’t focus just on the sweet stuff.

15 Then the seventh angel blew his trumpet, and there were loud voices in heaven, saying,

“The kingdom of the world has become the kingdom of our Lord
and of his Messiah,
and he will reign forever and ever.”

16 Then the twenty-four elders who sit on their thrones before God fell on their faces and worshiped God, 17 singing,

“We give you thanks, Lord God Almighty,
who are and who were,
for you have taken your great power
and begun to reign.
18 The nations raged,
but your wrath has come,
and the time for judging the dead,
for rewarding your servants, the prophets
and saints and all who fear your name,
both small and great,
and for destroying those who destroy the earth.”

19 Then God’s temple in heaven was opened, and the ark of his covenant was seen within his temple; and there were flashes of lightning, rumblings, peals of thunder, an earthquake, and heavy hail.

Handel of course made vs 15 an important part of the Hallelujah Chorus – “The kingdom of the world has become the kingdom of our Lord and of his Messiah, and he will reign forever and ever.”

Handel probably wasn’t the first composer to put these words to music. Our Bibles print these verses in a different format – usually set off on its own & printed like poetry – because it is.  Greek scholars look at these words and tell us that they were most likely hymns and worship songs sung by the earliest Christians.

And why wouldn’t you want to sing these verses?

It’s the final victory of God!

It’s the answer to the Lord’s Prayer – “Thy Kingdom come.”

This means that the God who reigns in heaven will now reign on earth.

The kingdoms of this world that seem so mighty and often so corrupt – they all give way to the King of the Universe.

So that the earth is now filled with God’s justice, God’s joy, God’s abundance, and God’s love!

There’s just one thing I want you to remember about this passage – Earth doesn’t get destroyed!

A lot of evangelicals and fundamentalist have somehow gotten the notion that the earth gets abolished, disintegrated, completely destroyed.

There’s a new heaven and a new earth!

There’s a uniting of heaven & earth – but that reuniting happens down here – not somewhere else!

“The kingdom of the world has become the kingdom of our Lord and of his Messiah, and he will reign forever and ever.”

We’ll get to Revelation 21 sometime around Thanksgiving. It says this: And I saw the holy city, the new Jerusalem, coming down out of heaven from God . . . and the One who is seated on the throne says, I am making all things new.

Earth gets made new, but it doesn’t get destroyed! Where will the Messiah reign for ever and ever?  – on earth! – the new heaven and the new earth.

John Piper is a very influential evangelical author and has been for years. He wrote this in 1974, in response to Hal Lindsey’s Late Great Planet Earth, which came out in 1970.

“When a person thinks he knows exactly what role a nation is going to play in God’s battle plan, which must all take place within the next 15 years (cf. p. 54), then he tends to think less responsibly as a citizen who is to pray for all rulers (1 Timothy 2:2) and seek peace with all people (Romans 12:18). He loses interest in such things as trade agreements, arms talks, currency stability, world food problems, etc.

In short, the effort to combat injustice and suffering in the world seems nonsense since we know what the fate of most nations will be anyway and that it all must happen very soon. This is, in part, the result of closing a chapter (p. 145) with the empty and misleading admonition: “We should be living like persons who don’t expect to be around much longer.”

Such a sentiment ignores, “the great commands of the prophets: to “do justice and love kindness and walk humbly with your God” (Micah 6:8); “to hate evil, love good and establish justice in the gate” (Amos 5:15); “to hold fast to love and justice and wait continually for your God” (Hosea 12:6); “to cease to do evil, to learn to do good, seek justice, correct oppression, defend the fatherless, plead for the widow” (Isaiah 1:16-17).

We would add to this list, environmental concerns. If you believe that the earth gets destroyed in the end and it’s going to happen soon, why make any sacrifices to avoid the effects of climate change?  Who cares?

Do you see the danger of believing the earth gets destroyed?

For God so loved the world!

We enjoy sunsets. Who gave us sunsets?

We enjoy rainbows. Who gave us rainbows?

We enjoy purple mountains majesty? Who gave us those mountains?

And who enjoyed creation first, long before we came along?   God did – “And God saw everything that he had made, and God said, ‘It is good!’”

As much as I’ve been saying, John was writing to encourage the people of his day, he does tell us a few things about the End Times. It’s God’s Kingdom come to earth. It’s where God’s will, Thy Will, is done. It’s Joy to the World the Lord is come! That’s a great Christmas carol, but it’s based on passages that refer to the Coming of the Messiah at the end of the age – “He rules the world with truth and grace.”

We’ve been talking about a lot of heavy things these last several weeks, so I thought I’d close with a cute story that fits with The Return of Christ. 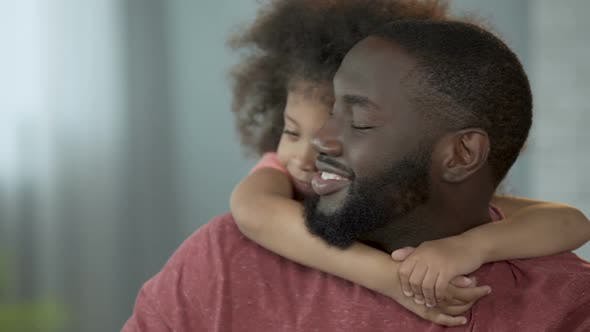 Illustration. David Peterson was a Presbyterian minister at a church in Spokane, Washington.

One day David was working on this sermon and his little daughter came into the room and said, “Daddy, can we play?”

The pastor replied, “I’m so sorry, Sweetheart, but I’m right in the middle of this sermon and I can’t stop right now. But in about an hour I can play.”

She said, “Okay Daddy, when you finish I’m going to give you a big hug!”

Peterson said back, “Thank You very much!”

She walked towards the door, but then did a U-turn and came back and gave her Daddy a bone-crushing hug!

Her father then said, “Honey, I thought you were going ot give me the great big hug after I finished my work.”

The little girl answered, “Daddy, I just wanted you to know what you have to look forward to.”

The Book of Revelation lets us know what we have to look forward to!