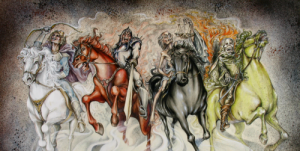 We’re studying the Book of Revelation this Fall. I’m calling this series, “A Crazy Book for Crazy Times.”

Revelation was written during crazy, tumultuous times, and the times we’re living in are certainly beyond the bounds of normal. As we’ve said before, Revelation was written in the late First Century when the Early Church was undergoing fierce persecution. Christians are being jailed and martyred. They refused to participate in Emperor Worship and that made them a threat to the Romans. Many of them also wouldn’t participate in pagan rituals in the towns they lived in. This made them outsiders, a small untrustworthy minority. They had to feel like their world was crushing in on them. Things they had always counted on – the Empire, their community, their friends – could no longer be counted on.

To make matters worse, the Apostle John, the only original disciple of Jesus still alive, is under house arrest on the prison island of Patmos. John is legendary by this time, “The Apostle of Love,” as he was called, due to his writings and messages on love. But the Romans have him exiled. Many scholars believe that John was the bishop of this entire region, in what is now Turkey (The 7 churches mentioned in the first three chapters of the book were the original recipients of this book). Certainly, the recipients of this letter were well-acquainted with John and he with them, and they must be heart-broken that he’s in exile.

John has a word of warning for them and many words of hope and visions of hope for them. Today – chapters 6 & 7.

To start, let me ask you a question: I have good news and bad news for you today. Which would you like first?

(the congregation chose to hear the bad news first, which was good since that’s how my notes were laid out!)

The Four Horsemen of the Apocalypse are ready to ride!

Then I saw the Lamb open one of the seven seals, and I heard one of the four living creatures call out, as with a voice of thunder, “Come!” 2 I looked, and there was a white horse! Its rider had a bow; a crown was given to him, and he came out conquering and to conquer.

3 When he opened the second seal, I heard the second living creature call out, “Come!” 4 And out came another horse, bright red; its rider was permitted to take peace from the earth, so that people would slaughter one another; and he was given a great sword.

5 When he opened the third seal, I heard the third living creature call out, “Come!” I looked, and there was a black horse! Its rider held a pair of scales in his hand, 6 and I heard what seemed to be a voice in the midst of the four living creatures saying, “A quart of wheat for a day’s pay, and three quarts of barley for a day’s pay, but do not damage the olive oil and the wine!”

7 When he opened the fourth seal, I heard the voice of the fourth living creature call out, “Come!”   8 I looked and there was a pale green horse! Its rider’s name was Death, and Hades followed with him; they were given authority over a fourth of the earth, to kill with sword, famine, and pestilence, and by the wild animals of the earth.

The Four Horses each stand for something awful.

Hades = ancient god of the underworld

So, here’s the progression of the Four Horsemen: Conquest – War – Famine – Death

Isn’t that a progression that history has repeated over and over again?

The desire to conquer and rule over others, the desire to acquire more land & more power, the patriotic justifications for war & bloodshed, and the famine and misery caused by war (“collateral damage” as they like to call it).

Aren’t the poorest nations on earth today those nations that have been ravaged by war?

Ultimately the thirst for power, the desire to conquer, war, and the famine that comes with it, leads to widespread death. The Four Horsemen of the Apocalypse ride on and on and on.

Richard Jeske is a Lutheran New Testament scholar. He writes this about today’s passage:

“What is being offered here is not a periodization of world history into seven great epochs, but rather a means of interpreting our own life experience.”   (Jeske commentary, p. 65)

“The four horsemen of the Apocalypse represent the full scale of personal and corporate disaster experienced in every period of human history . . . The book of the seven seals is therefore not a linear chronology of the history of the world, but rather it is a statement that such disasters will not overcome God’s people.”   (Jeske p. 67)

John is not shy about naming the evils in this world. He’s telling his people, “Evil is happening and it’s going to get worse.” – the Four Horsemen are coming!

In this chapter John goes on to write about more martyrdom is coming, and widespread, awful natural disasters. And then the chapter ends with this question, “Who shall stand?” Who will hold up and stand up against the evils of this world?

There’s a surprising answer – God’s people will. The church will–this sorry little band of persecuted outsiders. They’ll name evil for what it is, confront it for what it does, and battle evil in the face of victories & defeats, all the while trusting that God will ultimately have the last word!

Let’s take a look at the next chapter.

In Revelation 7, John’s focus shifts to heaven, and he gives us two very different visions. In the first one he sees 144,000 who make it through the trials & tribulation that are to come. 144,000 is the 12 tribes of Israel squared with the followers of the 12 disciples many times over.  (fullness!) In other words, heaven will be filled with everyone who should be there, with exactly the right number.

But then we read this beautiful passage –

After this I looked, and there was a great multitude that no one could count, from every nation, from all tribes and peoples and languages, standing before the throne and before the Lamb, robed in white, with palm branches in their hands. 10 They cried out in a loud voice, saying,

“Salvation belongs to our God who is seated on the throne, and to the Lamb!”

“Amen! Blessing and glory and wisdom
and thanksgiving and honor
and power and might
be to our God forever and ever! Amen.”

13 Then one of the elders addressed me, saying, “Who are these, robed in white, and where have they come from?” 14 I said to him, “Sir, you are the one that knows.” Then he said to me, “These are they who have come out of the great ordeal; they have washed their robes and made them white in the blood of the Lamb.

15 For this reason they are before the throne of God,
and worship him day and night within his temple,
and the one who is seated on the throne will shelter them.
16 They will hunger no more, and thirst no more;
the sun will not strike them,
nor any scorching heat;
17 for the Lamb at the center of the throne will be their shepherd,
and he will guide them to springs of the water of life,
and God will wipe away every tear from their eyes.”

John wants his readers to know, and he wants us to know that evil will not have the last word –  God will. That should give us confidence, courage, and the energy to persevere.

Illustration. The classic illustration of this is the culminating events of WWII.

D Day as you know was June 6, 1944. The Normandy Invasion was the decisive battle of the war. After D Day the tide had turned. In the weeks that followed the outcome became certain, it was just a matter of time. And yet the war was not over in Europe until almost a year later.  V-E (Europe) day was May 8, 1945, and V-J (Japan) day was not until Aug. of 1945. Much suffering, hardship and deaths occurred between D-Day and the Victory Days, but the decisive battle had been fought and won by the Allied forces on the shores of Normandy.

Christians look at the life of Christ like D-Day. God landed upon our shores in Jesus of Bethlehem. His life, death and resurrection are our victory over sin, over injustice, over evil, over death and separation from God. Christ won the decisive battle over the Enemy on Easter Sunday. But much suffering, hardship and injustice still rage on in this world. Victory Day has not come yet. The Return of Christ will be the ultimate victory Day. As God’s Kingdom comes to earth in all its fullness.

And as John wrote, “They will hunger no more, and thirst no more; the sun will not strike them, nor the scorching heat;
for the Lamb at the center of the throne will be their shepherd,
and he will guide them to springs of the water of life,
and God will wipe away every tear from their eyes.”

Lord Jesus, we thank you and praise you for your victory over sin and death. Thank you that your victory is a shared victory, and it’s shared with us and a multitude that no one can number. Give us the confidence and courage that we need to remain faithful during challenging times, trusting in your ultimate victory. In your precious and powerful name we pray. Amen.