We’re studying the Book of Revelation this Fall – “A Crazy Book for Crazy Times.” Last Sunday we looked at the 7 Seals – they were attached to a scroll that unfolds the End Times as each seal is removed.

We’re said these visions given to the Apostle John are just that – visions. They are not reality. There’s no giant scroll in heaven. John creates picture after picture telling his readers that it’s going to get worse, even crazier in the days ahead, but God is still in charge, in spite of the evidence.

The Book of Revelation is “apocalyptic literature,” common in the First Century, but not common for us. One of the least appealing characteristics of this type of writing is its incredible repetitiveness. So just as the images of the 7 Seals are coming to an end, John starts telling us about the 7 trumpets, and later we’ll read about the 7 Bowls of Wrath. There are 7 such cycles in the book. So rather than trudge through all those cycles, we’ll instead look for some nuggets of spiritual truth within those cycles.

When the Lamb opened the seventh seal, there was silence in heaven for about half an hour. 2 And I saw the seven angels who stand before God, and seven trumpets were given to them.

3 Another angel with a golden censer came and stood at the altar; he was given a great quantity of incense to offer with the prayers of all the saints on the golden altar that is before the throne. 4 And the smoke of the incense, with the prayers of the saints, rose before God from the hand of the angel. 5 Then the angel took the censer and filled it with fire from the altar and threw it on the earth; and there were peals of thunder, rumblings, flashes of lightning, and an earthquake.

6 Now the seven angels who had the seven trumpets made ready to blow them.

8 The second angel blew his trumpet, and something like a great mountain, burning with fire, was thrown into the sea. 9 A third of the sea became blood, a third of the living creatures in the sea died, and a third of the ships were destroyed.

10 The third angel blew his trumpet, and a great star fell from heaven, blazing like a torch, and it fell on a third of the rivers and on the springs of water. 11 The name of the star is Wormwood. A third of the waters became wormwood, and many died from the water, because it was made bitter. 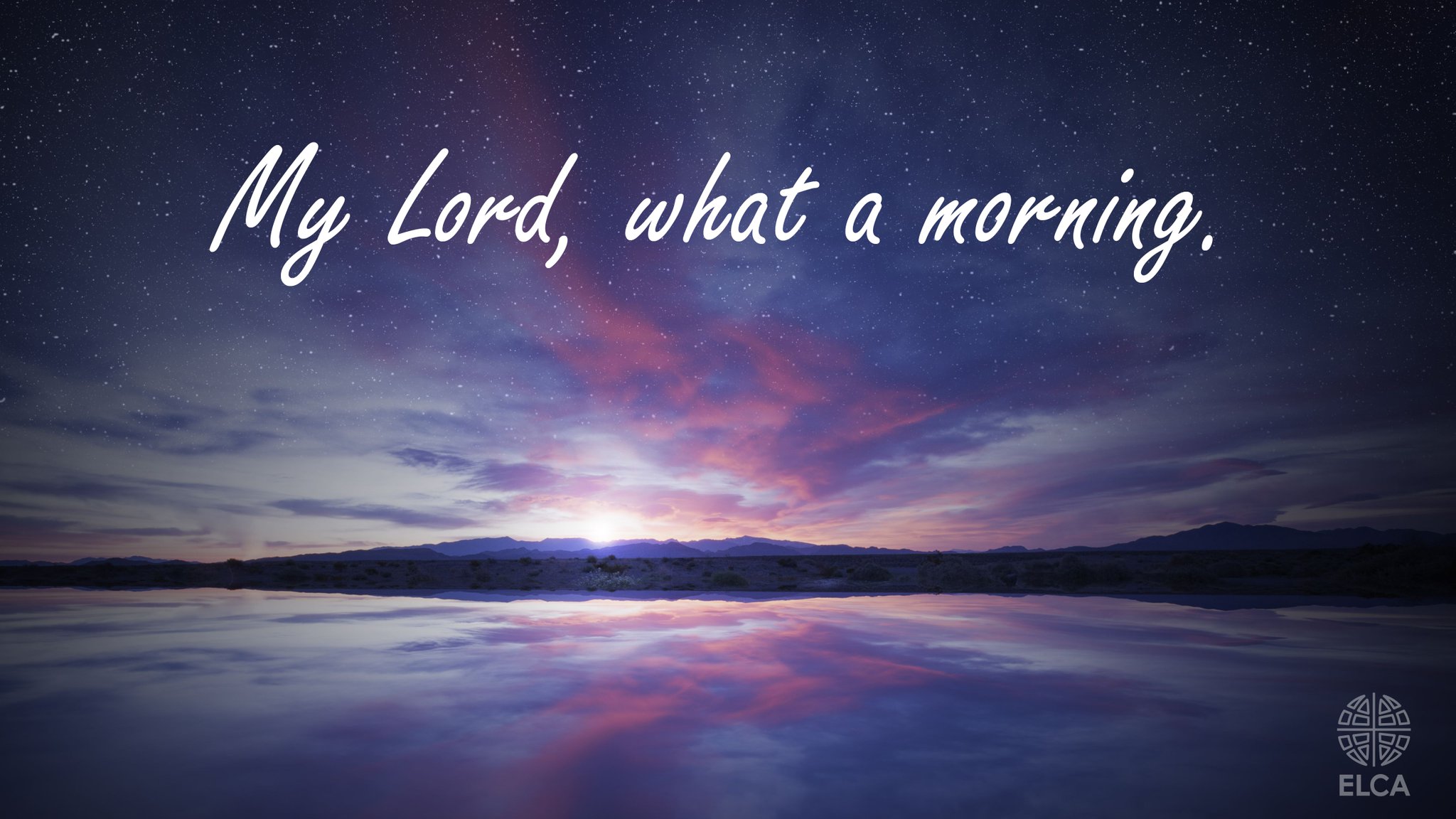 “My Lord, What a Morning” is an African-American spiritual based partly on this passage in Rev. 8, especially vs 12 – where the sun, moon and stars no longer shine brightly.

“My Lord, What a Morning”

You’ll hear the trumpet sound
to wake the nations underground,
looking to my God’s right hand
when the stars begin to fall. [Refrain]

You’ll hear the sinner moan
To wake the nations underground,
Looking to my God’s right hand
When the stars begin to fall. [Refrain]

You’ll hear the Christian shout
To wake the nations underground,
Looking to my God’s right hand
When the stars begin to fall. [Refrain]

If you believe the world is just and basically fair for all, then you want things to stay the same.

If you believe the world is unjust for many people, then you probably realize that sometimes the status quo needs to be shaken up, stirred up and changed.

This is why radicals and revolutionaries and special interest leaders can be so annoying! (I say that in jest) – they want to upset the applecart and change the way things are so that the world becomes more fair, more just, more sustainable.

And if we’re benefitting from the ways things are that can be unwanted and even threatening to us.

So, this first point is Bad News/Good News. This world isn’t just in many ways, so the status quo often needs to be challenged, but God’s justice is coming to the earth, so let’s be on the right side of that now!

The next point is all Good News. 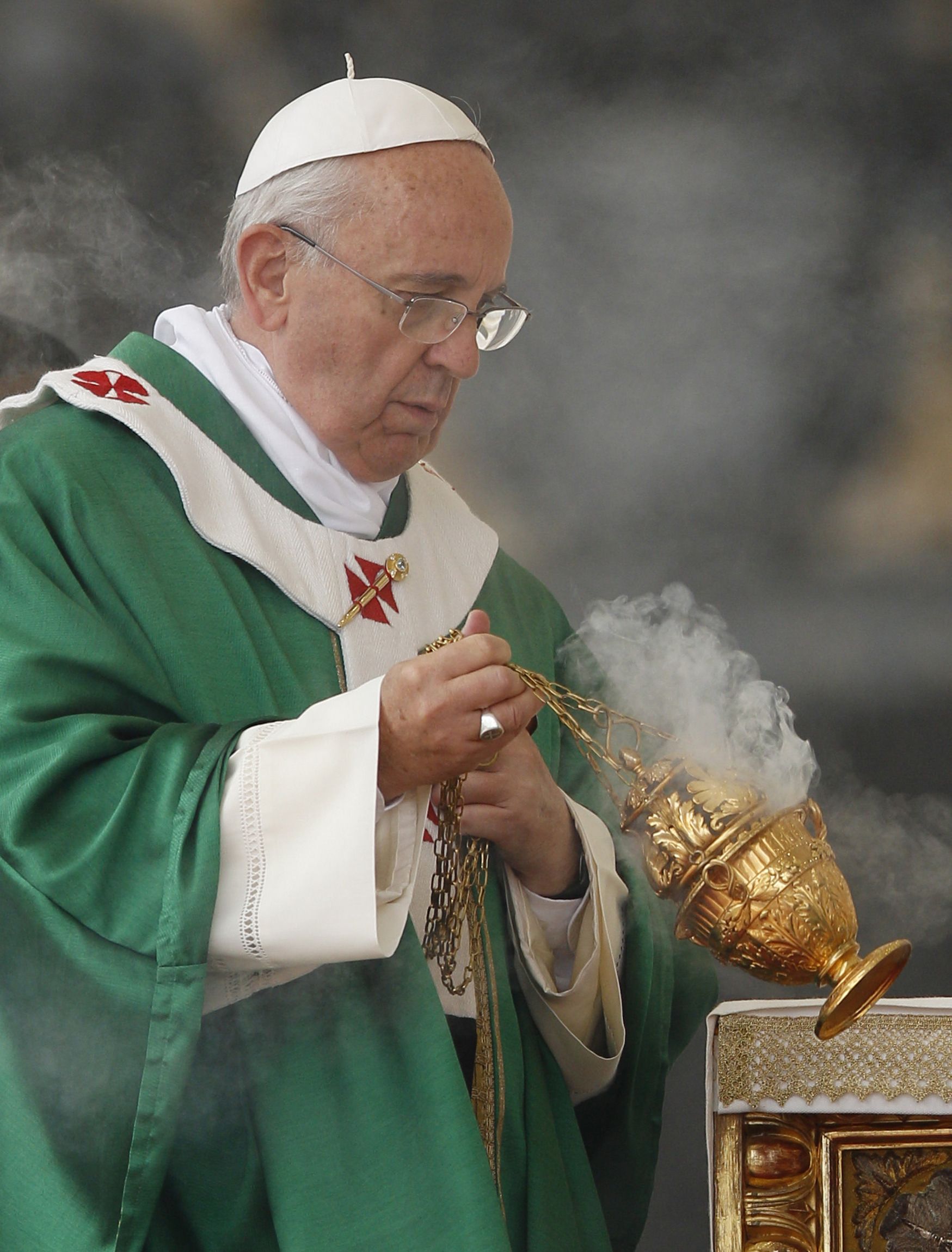 Isn’t that a fascinating detail? All kinds of terrible calamities happened during the 7 Seals, and the 7 Trumpets are warming up and about to blow their horns, but before they do, there is complete silence in heaven.

Then an angel comes with a golden censer. A censer is a fancy container that used to burn incense. If you’ve ever been to a Roman Catholic funeral you’ve probably seen a priest swinging a censer up and down the aisle.

That act by the priest symbolizes the prayers of the people going up before God. At a funeral, the censer often spreads the incense around the casket as a prayer for the deceased. The smoke of the incense represents the prayers of the faithful. This symbolism goes all they way back to the Old Testament Temple in Jerusalem, so John’s readers are familiar with it.

Vs. 3 – the incense is offered with the prayers of the believers.

So, now we see why there was silence in heaven – it was so that God could listen to the prayers of those struggling, persecuted, little band of Christ-followers.

Their prayers were heard in heaven, in fact, their prayers were the only thing heard in heaven! All the interventions and judgements had stopped. All the praise had stopped – remember all the praise we’ve read about so far? – the Four Creatures around the throne, the 24 Elders, the Cherubim and Seraphin – they all keep quiet, so God can hear the prayers of God’s children.

Isn’t that a beautiful image!  (Revelation’s not all scary!!!)

William Barclay writes this: “The needs of the saints are more important to God than all the psalmody of heaven. Even the music of heaven and even the thunder of revelation are stilled so that God’s ear may catch the whispered prayer of the humblest of his trusting people.”   – Barclay, p. 40

God shushes all of heaven, so our prayers can be heard!

So we all sometimes have moments of doubt when it comes to God and faith and prayer. And some days you may not think or feel that God is hearing your prayers, but always remember this vision from the Book of Revelation.

When you pray, it’s the only thing God hears.

Chapter 9 details the 6th & 7th Trumpets and the destruction and plagues that they bring. The chapter closes with these verses:

20 The rest of humankind, who were not killed by these plagues, did not repent of the works of their hands or give up worshiping demons and idols of gold and silver and bronze and stone and wood, which cannot see or hear or walk. 21 And they did not repent of their murders or their sorceries or their fornication or their thefts.    (Revelation 9:20-21)

Isn’t that one of the saddest passages in the Bible?

Think of all that has taken place in John’s visions –

–the destruction brought by the Four Horsemen

–the calamities caused by the Seven Seals and now the first Six Trumpets.

You’d think that the people in John’s visions would have turned to God by now, but they didn’t.

John is telling his readers, things are going to get quite challenging. It’s going to get worse, so we’d better turn to God now. We’d better heed the warnings now, while we still can.

The passage is a reminder to all of us that God’s warning and God’s invitations can often fall on deaf ears, and we can be persistently stubborn in dismissing God’s warnings.

Think of how God’s creation is warning us about environmental consequences of climate change. Every storm, every wildfire is a trumpet blast!

Think of all the gun violence in America, statistically way higher than all other developed nations, and each shooting is like a trumpet blast from the Book of Revelation, but we just won’t wake up.

On a more personal level, what has God been trying to warn you about and you just keep ignoring the messages?

We get all kinds of warnings.

Our bodies often try to warn us when we haven’t been taking care of ourselves, or we need to see a doctor.

We get warning signs in our relationships, when resentment or distance or a lack of joy and laughter sneak in.

We get warnings when it comes to our financial health. Often these warnings come from our bank!

We get warnings about our dependencies and additions when they interfere with our daily lives.

They’re very different from one another.

Which part of the vision is perhaps for you today?

Please take some time to reflect upon these questions.