Sermon on the Mount Series 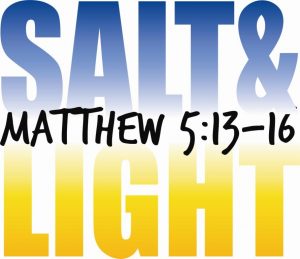 As you well know, Jesus taught in the days long before pod casts, YouTube videos and Power Point Presentations. Therefore, he had to utilize other techniques to help people remember his teachings and share them with others.  One method was telling stories, what we call his parables – earthly stories with heavenly truths.  Another method was he utilized picturesque speech.  He used words to focus peoples’ attention, to paint pictures, to convey truths. And he used everyday things in his analogies. Things like mustard seeds, the lilies, sheep & shepherds, a lost coin, a buried treasure.

The images found in this passage could not have been more common or more familiar for his listeners. Let’s take a look.

Matthew 5:13-16
“You are the salt of the earth; but if salt has lost its taste, how can its saltiness be restored? It is no longer good for anything but is thrown out and trampled under foot. “You are the light of the world. A city built on a hill cannot be hid. No one after lighting a lamp puts it under the bushel basket, but on the lampstand, and it gives light to all in the house. In the same way, let your light shine before others, so that they may see your good works and give glory to your Father in heaven.”

In the 1990s Ilene Rosenzweig and Michael Caruso both worked for the magazine, Vanity Fair. Caruso was a senior editor and was constantly trying to pitch story ideas to the Editor-In-Chief, Ms. Rosenzweig, but he could never get her attention long enough to fully pitch a story idea. She was always on the move. So Caruso decided to accompany her on her little jaunts around the office building, including taking elevator rides with her. And on these elevator rides he would pitch his story ideas.

I’ll bet many of you have heard of the concept of an “Elevator Speech” or an “Elevator Pitch.” It’s where you have to explain an idea or sell an idea to someone in the time it takes to ride the elevator from the bottom to the top of the building, usually 30-60 seconds. Now we have only 3 floors, so an elevator ride around here doesn’t take long.

But if you had to explain to someone what Central Congregational Church is all about in the length of an average elevator ride, what would you say?
How would you start?  What are we all about?  What’s our purpose?

Our passage today helps us out quite a bit, and you could make an Elevator Speech that you could complete, even riding our elevator.

Jesus said, We’re to be the Salt of the Earth and Lights to the World.

Salt & Light.   Let’s spend some time with each one. 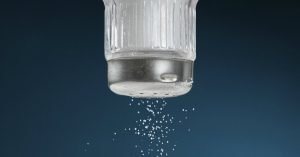 It’s an expression that’s still in use today.  “That guy is ‘the salt of the earth. Salt of the earth, right there.”  It means someone who’s incredibly kind and good and generous. They’d do anything for you. It’s someone who by their very nature makes the world a better place to be.

That’s the calling of the church as well – to make the world a better place, to bring more of the Kingdom of Heaven to earth.

A couple of things about Salt.

Illustration.  I had a friend in high school named Denny. He was one of the coolest kids in the school. He had long dark hair parted in the middle and looked like David Cassidy, which was a big plus for him in the 1970s. Denny became a committed Christian after high school. He went to church every Sunday and was very active in the church. But for several years he was still just one of the guys at work, still had some of his old habits, still went out often with his co-workers and stayed out late even thought he was a father of three, told some of the same kinds of jokes that others told, still used language that was often demeaning or judgmental or inappropriate in a number of ways.

One day someone said to Denny, “You’re a cool Christian, Denny. Not like other church-goers who get so uptight. You’re just like the rest of us.”

That stopped him in his tracks. For he knew they weren’t talking about him being down to earth and approachable. They were talking about ways in which he was compromising his faith and not living what he believed. He realized his calling was not to be like everyone else. He was called to be different – like salt is different the meat and the corn it’s put on.

Two years later Denny and his wife had become missionaries in Cairo Egypt serving the poorest of the poor.

Which leads us to the next point about salt.

2. Salt is a preservative, especially in ancient times.

They covered meat in salt so it wouldn’t go bad. Salt preserves and protects things. And so must the church.

3. One other obvious thing about salt- it adds flavor. That’s why we put it on popcorn, corn on the cob, french fries and potatoes. It makes it taste better.

Christians ought to add flavor to life.

Christians ought to add some excitement to life.

Christ-followers should have a zest for life, an enthusiasm and joy that are contagious!

That isn’t exactly our reputation.

Robert Lewis Stevenson once wrote something in his diary about going to church. He records it as if something extraordinary had happened: “I have been to church today and am not depressed.”

Oliver Wendell Holmes once said, “I might have entered the ministry if certain clergymen I knew had not looked and acted so much like undertakers.”

The funny thing is most funeral directors I know are delightful people and have wonderful sense of humors.

But the point is modern Christianity often needs to put on a happier face.

“We’ve got the joy, joy, joy, joy, down in our hearts,” as the Sunday school song says.  We talk about “the joy of the Christian” as being a “deep, deep joy,”  The only problem is sometimes it’s so far down it can’t get out! It gets stuck down there!

When I think back to the church I started attending in high school, one of things that kept me going back was the fact that Christianity looked appealing, exciting and fun. It seemed like a great adventure. We need to recapture that. That’s part of being the salt of the earth.

Let’s spend just a few moments with the other image. 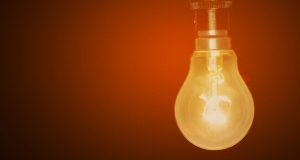 A couple of quick points about this.

Here in Matthew 5 he says, “You are the Light of the World.”

We’re called to be what he already is.

Martin Luther said we’re called to be “Little Christ’s” to each other and to the world. We’re to embody Christ’s Love, reflect Christ’s love for the world. Now of course it’s not our light that we shine, but rather the light of God within us.

It’s like the Candlelighting Ceremony on Christmas Eve. We don’t bring our own candles with our own light. We all receive our light from the Christ Candle. Christ lights our lives and we share that Light with one another and the world.

2. Another thing about light is light is meant to be seen.

Jesus said, “You don’t light a lamp and then set it under a basket. No you put it on a lampstand for all to see. In the same way let your light so shine.”

I hope this year we can get church t-shirts that we can all wear for service projects and other events, so our community can see that we care, that we’re about being a blessing to our community. “Let your light so shine so that can see your good works.”  It’s not showing off. It’s simply showing that our faith is not just words and no action. 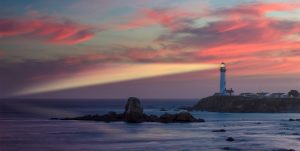 3. One other function for light is for guidance in the dark.

We’re called to be Guiding Lights to one another and to the world. There’s enough darkness in the world. The world needs more light, more hope, more harmony, more joy, more compassion, more love. The world also needs more civility. That’s why we’re going to practice discussing such matters as immigration from an educational standpoint – in order to gain a greater understanding, and not just try to win a debate. We can be an example to one another and to others of how to handle our differences, how to respectfully disagree. Let’s spread civility. Let’s spread light.

Illustration. Author Rita Snowden writes of her visit to a small town near Dover, England. She was having afternoon tea at an outdoor café when she noticed a beautiful smell in the air. She asked the waiter where it was coming from. He explained to her that just down the street was a perfume factory.  And every afternoon when the workers left the factory they carried with them the fragrances that had permeated their clothes throughout the day.

Snowden thought to herself, that’s a beautiful image of the church. We come here each Sunday to experience the beautiful fragrance of the presence and love of God. As we leave here and go out into the world, may the fragrance of God’s love permeate us, so that those we meet might experience something of God’s fragrance on us.