In those days a decree went out from Emperor Augustus that all the world should be registered. This was the first registration and was taken while Quirinius was governor of Syria. All went to their own towns to be registered. Joseph also went from the town of Nazareth in Galilee to Judea, to the city of David called Bethlehem, because he was descended from the house and family of David.  He went to be registered with Mary, to whom he was engaged and who was expecting a child.  While they were there, the time came for her to deliver her child.  And she gave birth to her firstborn son and wrapped him in bands of cloth, and laid him in a manger, because there was no place for them in the inn.

To get us into this passage today let me start with a basic principle for understanding scripture.

The principle is this:  Interpretation guides application.

How we interpret the meaning of a passage will greatly influence how we apply it.

The original meaning of the text (scholars calls this the exegesis of the passage) guides how we apply it to our lives today.

It’s a rather obvious and intuitive concept, but you’d be surprised how many times this comes into play. We came across it frequently in our study of the Book of Revelation. The commentaries I utilized would often say something like this: “We believe that the original intent of this passage was not to give us today a roadmap for the End Times, but rather a message of hope for the people John the Apostle was writing to in the First Century.” Other commentaries say just the opposite: “John is telling us about the literal 1000 year reign of Christ upon the earth.”

Do you see how deciding on the original meaning of the text is crucial in determining what the passage means for us today? Here’s another example:

In I Timothy 2:9-11 the Apostle Paul says, “Women should dress modestly . .  and not adorn themselves w elaborate hairstyles or gold or pearls or expensive clothes.”

Is Paul spelling out a rule for all time, or just for then?

Were his instructions for just the churches under Timothy’s charge or for all churches everywhere?

You can see that how we answer those questions will determine how we apply the passage to our lives today.

(I grew up in southeastern Pennsylvania among many wonderful Mennonites. These were almost all modern Mennonites – no horse and buggies. But the various churches had different standards on things like jewelry and fancy clothes. Some Mennonite women never wear jewelry at all, to adhere to this passage. Others determine that one can wear jewelry and still be dressed modestly.)

Believe it or not, this issue comes up in the Christmas story.

We all know that famous phrase, “No Room at the Inn.” There was no room at the local inn in Bethlehem. I recently discovered an alternative interpretation.

I’ve often felt sympathy for that poor innkeeper, haven’t you? Imagine meeting an Innkeeper in Heaven!

“So what’d you do down there on earth?”

“I was an innkeeper.”

“Oh my. What time period are we talking about?”

“Don’t judge me, Man!!! We were packed that night! Everyone was in town for the census! I really didn’t have an empty room!!!”

I once heard a British preacher say, “If you’re too busy for God, you’re too busy. Period!”  (He had such a great accent that the statement didn’t sound harsh at all! But it’s actually quite challenging.)

But here’s what I find really interesting, there’s an alternative reading of Luke 2:7.

The verse can be translated: “There was no room in the guest room.”

If you interpret the verse like that, the meaning and application could be quite different! 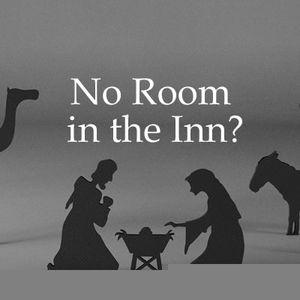 The Greek word that is translated “Inn” is kataluma and is best understood as a “guest room,” and not a commercial lodging used for travelers.

Luke 22:11 uses the word, kataluma and it’s translated “guest room.”  “Say to the owner of the house, ‘The teacher asks you, ‘Where is the guest room, where I may eat the Passover with my disciples?”’ This passage is about where Jesus and the Disciples would eat the Passover Meal at what we call, The Last Supper. They ate that meal in a large upper room, which was a common place to have a guest room in the First Century.

Here’s another piece of evidence . . .

Luke 10:34 – the Good Samaritan takes the wounded man to an inn. The Greek word used is pandokheion – the usual word for an inn. He didn’t take him to a kataluma! He took him to a pandokheion!

Are you following me?

A growing number of scholars are now saying that the alternative reading may be correct! “There was no room for them in the guest room.”

How does that change things? 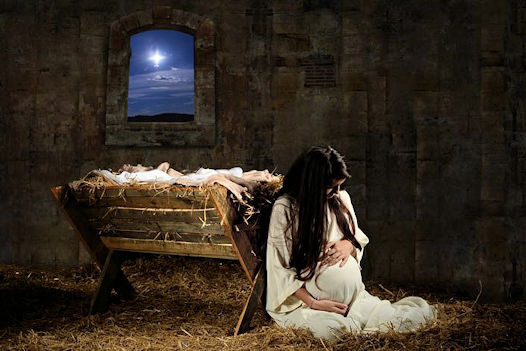 One way to look at it is that there wasn’t a nasty innkeeper at all. There was just a house, and it was full. The guest room taken. So Mary has to give birth in a separate area of the house, a place where the animals were or where they usually were. This area may have been adjacent to the house or even inside the house. People often brought their animals inside when it got really cold. There houses had bedrooms sectioned off and then an open area that was used for a variety of purposes – a living room, an eating area, a place for animals when it was cold. That’s why there happened to be a feeding trough there. Mary may have even chosen this area for privacy. That would not have been out of the ordinary. Jesus may have come into the world in a very normal way.

So what’s the message then?

God comes to us in our ordinary lives.

God doesn’t just come to us on mountaintops, or rescue us dramatically in the valleys.

God wants to walk with us every single day as we go about our very ordinary lives. Most of us are not called to be monks, nuns, or some form of super-spiritual saints. We’re just called to walk with God.

Jesus may have come in a very ordinary way.

“No room in the guest room, but here’s a good area, Mary. You’ll be comfortable here.”

But there’s one other possibility.

If we translate kataluma as “guest room,” it may be that Joseph and Mary were turned away by relatives. Why were they in Bethlehem? It was the home of Joseph’s family. He probably still had relatives in the town – cousins, aunts, uncles, etc.

Maybe they turned away Joseph & Mary because they were poor?  Maybe they were embarrassed that they were from the Nazareth in Galilee, a very poor part of the country. Remember what folks would later say about Jesus and his hometown, “Can anything good come out of Nazareth?”

Maybe they turned away Joseph & Mary because she was pregnant outside of marriage?

“Joseph, the woman you’re with is clearly pregnant, and we didn’t get invited to your wedding. Did you have one? I guess not. Well, there’s no room here. Our guest room isn’t for sinners!”

When our hearts are cold and small, ungracious or ungrateful, we’re not in a good place spiritually. We’re leaving God out of the situation, out in the cold. And that’s not where we want God to be, is it?

Well, I hope you found this interesting and helpful.

It demonstrates that how we interpret a passage – what did it mean when originally written – that determines how we apply it to our lives.