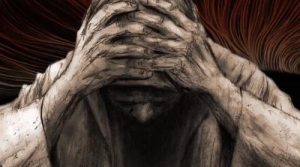 20 Then Job arose, tore his robe, shaved his head, and fell on the ground and worshiped. 21 He said, “Naked I came from my mother’s womb, and naked shall I return there; the Lord gave, and the Lord has taken away; blessed be the name of the Lord.” 22 In all this Job did not sin or charge God with wrongdoing.

I’ve been reading up on trauma recently. When I googled “Job and Trauma” I was amazed at how many articles there are and how many psychologist and trauma experts have written on the subject – analyzing the book of Job based on our modern understanding of trauma and how it affects a person.

If anyone had a right to be traumatized, it was Job. In a short amount of time, he loses everything—his servants, his livestock, his farm, and his children.

Experiencing any of those losses would be hard, but losing them back to back to back would be devastating. Isn’t life the hardest when we’ve barely caught our breadth from one traumatic experience, and the next one happens? 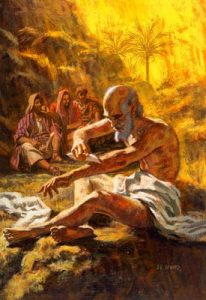 In Ch. 2 Job comes down with painful sores from the top of his head to the bottom of his feet. He even takes a broken piece of pottery and tries to cut off the sores.

Job’s wife then says, “Curse God and die.” But Job replies, “Shall we receive the good at the hand of God, and not receive the bad?” – he’ll eventually challenge that idea. Job’s wife’s beliefs are shattered – the children were her children, too. The farm was her farm, her home, too. Her trust in God is gone. Trauma & Pain can do that. They can overwhelm faith.

Illustration. Think about a carpenter driving in a nail and missing the nail and hitting one’s finger. You can’t expect much from that carpenter at that moment. He (or she) won’t be very spiritual. He may utter religious words, but they will be without context. He’s in too much pain to be calm and filled with faith and heaven’s peace. Pain and trauma can overwhelm faith.

Part of what makes a traumatic event traumatic is the things that we usually depend upon to see us through no longer work. That’s played a large part in making this pandemic so challenging. As people of faith, as church folk – what do we traditionally rely upon to see us through? – our faith yes, but our faith is nurtured, sustained and strengthen through each other – through gathering together for worship, for prayer, for hugs, for laughter, for tears. The things we rely upon either haven’t been there for us, or they’re there but in a very different and often diminished way. 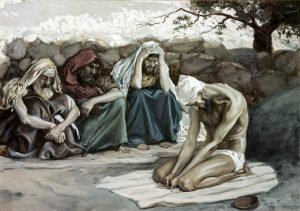 A little further on in the book we find out that Job has 3 good friends. They know they need to go and be with him.

11 Now when Job’s three friends heard of all these troubles that had come upon him, each of them set out from his home—Eliphaz the Temanite, Bildad the Shuhite, and Zophar the Naamathite. They met together to go and console and comfort him. 12 When they saw him from a distance, they did not recognize him, and they raised their voices and wept aloud; they tore their robes and threw dust in the air upon their heads. 13 They sat with him on the ground seven days and seven nights, and no one spoke a word to him, for they saw that his suffering was very great.

Job’s three good friends are speechless. They are there to comfort him, but the situation is so overwhelming they can’t find the words.

Illustration. In 2014 Robin Williams ended his life by suicide. His dear friend Billy Crystal sent out a tweet that simply read, “No words.”  – that said it all. The inability to find words, both for Billy Crystal and for Job’s friends, speaks to the overwhelming nature of the traumatic event.

The effects of this pandemic are sometimes hard to describe, hard to find the right words for – why has this been so hard? Well, it’s gone on for so long; there’s no end in sight; it’s effected the lives of those we love and even taken the lives of those we love. But still, it’s a little hard to describe this time we’re in and how it’s impacted us. Forgive me for making an obvious point, but this pandemic qualifies as a traumatic event. Just ask our health care workers.

We usually think of traumatic events as some sudden, brief and very dramatic – Sept. 11, being a car crash, being robbed or assaulted, witnessing anything violent especially war. We know these things are traumatic and the effects linger – Post Traumatic Stress Disorder. But medical crisis, the Covid totals, the death totals, the pictures of hospital patients on ventilators, having a loved one on one of those ventilators – all traumatic events.

We’re probably all a little traumatized by now.

I’ll bet some of you are saying, “Duh!”  – but others of you are saying to yourself, “That sounds a little strong, ‘traumatized,’ but maybe he’s got a point?” I had two experiences recently that really made me stop and think about this issue.

Ex. I was updating the events listing on our church’s website and started looking at old pictures on my computer of past church events. I was looking for pictures to use for our upcoming events, and I couldn’t believe how surprised I was to look at the old pictures. I felt like I was looking at pictures from some other church. People were smiling, laughing, eating, and sitting and standing close to each other. I had forgotten how much fun we used to have! When something traumatic happens we often forget what came before.  Ex. My Dad died when I was 8 yrs old. That’s well beyond the onset of long-term memory, but I have very few memories of him. His death was like a bomb blast that clouded all directions – the present, the future, and even the past.

Here’s another example. We went miniature golfing with friends two weeks ago. It was only the second time we’d done anything like this with other people. We were outside of course, yet we all kept our masks on and kept our distance from one another.  We didn’t feel comfortable and safe with each other. Part of being traumatized is often not feeling safe, feeling the world is a dangerous place and there are unseen forces out there just waiting to do us in–like an airborne virus!

Job certainly doesn’t feel safe and at times he no longer wants to live.  Listen to these verses from Ch. 3

Do you hear how the world doesn’t seem safe to Job anymore?  – “whatever I dread happens. I can’t even rest because trouble is just around the corner.”

And these verses from Ch. 29 go even further:

2 “O that I were as in the months of old, as in the days when God watched over me; 3 when his lamp shone over my head, and by his light I walked through darkness; 4 when I was in my prime, when the friendship of God was upon my tent; 5 when the Almighty was still with me.”

Job’s faith is now completely shaken. – his friendship with God is a thing of the past. This is what traumatic events can do to us – shake our foundations and make us question everything we ever believed.

Biblical Scholars say that Job never really gave up on God. The doubts he has are actually based on the fact that he believes God is good, kind and loving. That’s why the bad things don’t make sense to him. He seems to believe what his friends believe, that trouble only comes to bad people, as a punishment.

Well, God finally responds to Job and says, “I know what I’m doing.” Job hears from God. Job experiences God again, and he is satisfied. His world is rebuilt.

The Book of Job has a Hollywood ending, some have even said a fairy tale ending. He regains everything he’d lost. He originally had 7 sons and 3 daughters. He regains 7 sons and 3 daughters. And the total of his livestock is even double what he had before. While our lives don’t usually have Hollywood endings, I think the point of the story is that Job chooses life, he chooses to live his life once again – starts a family again, builds a nice farm and prospers. He steps into the next chapter of his life, and he steps into it walking with God.

Job 42: 12 The Lord blessed the latter days of Job more than his beginning; and he had fourteen thousand sheep, six thousand camels, a thousand yoke of oxen, and a thousand donkeys. 13 He also had seven sons and three daughters.  14 He named the first Jemimah, the second Keziah, and the third Keren-happuch. 15 In all the land there were no women so beautiful as Job’s daughters; and their father gave them an inheritance along with their brothers. 16 After this Job lived one hundred and forty years, and saw his children, and his children’s children, four generations. 17 And Job died, old and full of days.

Traumatic events happen and they can shake our foundations.

But God never gives up on us and will see us through and bring us out on the other side.

Our job is to keep struggling, keep in conversation with God, and keep walking, trusting that God is leading us into a new day. 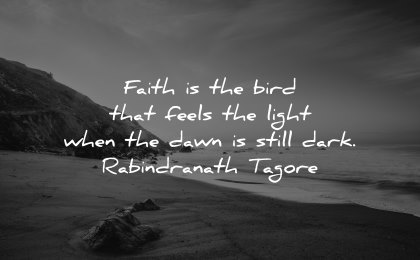