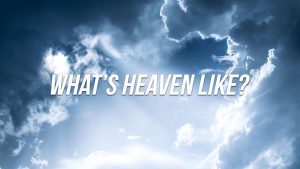 We’ve been studying the Book of Revelation this Fall because it’s a crazy book written during crazy times. The early church was being hit with challenges, difficulties, and persecution from all sides.  It must have seemed like the world was off its axis, a lot like it feels to us these days.

In Chapter 21 John has a vision of heaven. Remember, it’s only a vision, filled with symbolism. Our job is to try and understand what spiritual reality the symbols are pointing to. Let’s take a look.

Then I saw a new heaven and a new earth; for the first heaven and the first earth had passed away, and the sea was no more. 2 And I saw the holy city, the new Jerusalem, coming down out of heaven from God, prepared as a bride adorned for her husband. 3 And I heard a loud voice from the throne saying,

“See, the home of God is among mortals. He will dwell with them; they will be his peoples and God himself will be with them; 4 he will wipe every tear from their eyes. Death will be no more; mourning and crying and pain will be no more, for the first things have passed away.”

5 And the one who was seated on the throne said, “See, I am making all things new.” Also he said, “Write this, for these words are trustworthy and true.” 6 Then he said to me, “It is done! I am the Alpha and the Omega, the beginning and the end. To the thirsty I will give water as a gift from the spring of the water of life. 7 Those who conquer will inherit these things, and I will be their God and they will be my children.

15 The angel who talked to me had a measuring rod of gold to measure the city and its gates and walls. 16 The city lies foursquare, its length the same as its width; and he measured the city with his rod, fifteen hundred miles; its length and width and height are equal. 17 He also measured its wall, one hundred forty-four cubits by human measurement, which the angel was using. 18 The wall is built of jasper, while the city is pure gold, clear as glass. 19 The foundations of the wall of the city are adorned with every jewel . . .  21 And the twelve gates are twelve pearls, each of the gates is a single pearl, and the street of the city is pure gold, transparent as glass. 22 I saw no temple in the city, for its temple is the Lord God the Almighty and the Lamb. 23 And the city has no need of sun or moon to shine on it, for the glory of God is its light, and its lamp is the Lamb. 24 The nations will walk by its light, and the kings of the earth will bring their glory into it. 25 Its gates will never be shut by day—and there will be no night there. 26 People will bring into it the glory and the honor of the nations. 27 But nothing unclean will enter it, nor anyone who practices abomination or falsehood, but only those who are written in the Lamb’s book of life.

Let’s first review some of the symbols in John’s vision and I’ll tell you what most commentators think those symbols are pointing to.

A. At the end of this present age, heaven and earth unite. There’s a new heaven and a new earth. But it’s interesting to note that “heaven comes down from God.” – mentioned 3 times in book of Revelation. That symbolizes the idea that earth doesn’t get destroyed Instead, the Kingdom of God comes and unites with earth – God’s will is done on earth as it is in heaven.-the Lord’s Prayer-answered! The uniting happens in the realm of mortals, not the realm of angels!

Ex. Think about a time when you wiped someone’s tears. I imagine it was someone you were very close to and loved dearly. That’s an intimate thing to do. John says our relationship with God in heaven will be that personal, that intimate, that loving.

In vs. 15, John’s Vision switches gears and he tells us that he saw an angel measuring heaven. This just goes to show that angels sometimes get bored on the job, just like humans. “Gabriel, I’m going to measure heaven. I’ll be right back.” Then we’re given the measurements of heaven – fifteen hundred miles – long – wide – high. That’s odd. It’s not very big, and it’s a cube. Gee, could that be symbolic? (he said sarcastically)

Remember, we take the bible seriously, but we don’t take it all literally! – especially the Book of Revelation!!!

The commentaries suggest that the cube stands for the Holy of Holies in the temple of the Old Testament. It was a forbidden place within the temple. Only the High Priest could go in there, and then, only once a year. In John’s heaven, the entire place is the Holy of Holies! And anyone can go on in to meet with God. In verse 22 John says there is, “no temple in the city, for its temple is the Lord God the Almighty and the Lamb.” The whole place is a Temple. Our whole existence will be filled with the full presence of God, so there’s no need for a physical temple. In heaven we all have open access to the eternal God who loves us more than we can ever imagine. That’s the best part of Heaven, beyond a doubt.

C, John also wants his readers to know that it’s a glorious place.

He says the place is so beautiful that the only thing he can compare to is a bride on her wedding day, adorned for her husband.

The walls is are made of jasper (vs. 18). Back then jasper was very shiny like crystal and shined like diamonds.

The foundations of the walls are adorned with every jewel that was highly valued in the First Century. We skipped this part in our reading, but he lists 12 precious jewels. (vs. 19)

Then he sees 12 gates going into heaven. Later he’ll tell us that these gates never close. There’s unfettered access to God.

Then he mentions that the gates are made of pearls – The Pearly Gates.

Think about what we pave our streets with – asphalt – hot, smelly, dirty asphalt.

Heaven is so spectacular, that they don’t use asphalt for the streets. They use gold! That’s John’s way of saying, as lovely as this world can be, heaven and the new heaven & earth that are coming are simply beyond compare. That’s obviously what the symbols are pointing to. Our best moments on earth – spiritually, emotionally, relationally –  are just a foretaste of things to come.

Let me close by briefly sharing some Reasons to Believe in Heaven.

.  “In my Father’s House there are many rooms. I’m going there to prepare a place for you, and I will come again and take you to myself, that where I am you will be also . . . because I live you will live also.”  -John 14