“Creation Care” is a new group and focus within our church. This group grew out of a book club on Rev. Dr. Jim Antal’s book, “Climate Church, Climate World: How People of Faith Must Work for Change.”

We believe that God calls us to be good stewards of all that is created. Our Creation Care Ministry helps to guide us as we seek to live in a way that supports the environment and has minimal impact on the earth. We recognize that issues of climate justice are interrelated with other justice issues in our communities, nation, and world.

We believe that caring for creation is a responsibility given to us by the Creator. Thus, it’s an issue of faith-filled stewardship and Christian discipleship. In the Creation Story found in Genesis 2, God specifically gives Adam (“adam” = all humankind) the task of caring for the earth.

The Lord God placed the man in the Garden of Eden as its gardener, to tend and care for it. 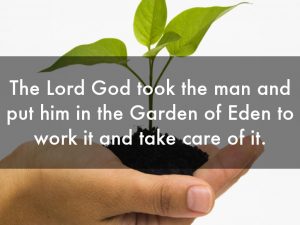 Climate Change – Get the Facts

What is Climate Change?

The earth’s overall average annual temperature has been rising since the mid 1800’s leading to changes in climate patterns, including rainfall, air streams, and ocean currents throughout the world.

Why is the Climate Changing?

The increase in the earth’s temperature is due to the accumulation of heat absorbing gasses in the lower atmosphere that is preventing the sun’s rays and other thermal energy generated on earth from radiating back into the upper atmosphere. This creates a greenhouse effect, which is why these gasses are often referred to as Greenhouse Gases (GHGs).

What is the Difference between Climate and Weather?

Weather reflects short-term conditions – what you see on any particular day. Climate is the average daily weather for an extended period of time at a certain location.

Where Do Greenhouse Gases Come From?

Carbon, methane, and nitrous oxide also exist naturally in the environment, but they are generally stored in “sinks” such as trees, soils and wetlands.

How Do We Know Climate Change is Human Caused?

The rise in global average temperature correlates closely with the advent of industrial activity in the mid-1800’s that began to increase sharply during World War II. It also tracks with the growth in GDP over this period of time. GDP measures the value of goods (products) that are produced over a given period of time. Production of goods relies on energy that is mainly provided by fossil fuels. The average temperature rise also tracks with measures of the levels of greenhouse gases in the atmosphere. 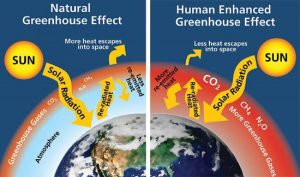 Hasn’t Climate Change Occurred in the Past?

Yes, but not at the accelerated rate we are experiencing now. Previous major changes in climate, such as the Ice Age, occurred over many thousands of years. Our recent dramatic rise in global temperature has occurred in just under 200 years, since about 1830. Nature does not have time to adapt to the changes this quickly. Prior to the industrial age, nature was in equilibrium with respect to natural emissions and sequestrations of carbon dioxide and methane.

What Are the Consequences of Climate Change?

Climate scientists have been studying the effects of the rising global average temperature since about 1960. Some of the effects observed and recorded, many of which are interrelated, include:

How Urgent a Problem Is Climate Change?

Very urgent. Global temperature is rising at a faster rate than previously predicted. Many scientists believe the world is rapidly reaching a tipping point:

What is the Significance of the number 350 with Respect to Climate Change?

350 parts per million of CO2 in the atmosphere is considered the safe level for human habitation, that at which civilization developed and to which life on earth is adapted. As of October 2019, we are at 412 parts per million, according to NASA. Climate activist Bill McKibben founded the organization 350.org to raise climate awareness.

What Must We (the World) Do to Slow Climate Change?

We must phase out fossil fuels as an energy source as quickly as possible and switch to clean energy from renewable sources; primarily solar, wind, and geothermal technology. Hydroelectric and nuclear power generation can continue to provide carbon free energy generation while renewable energy technologies continue to evolve.

We must switch from gas powered to electric vehicles, and from oil and gas home heating systems to solar and geothermal type systems (air or ground based heat pumps). Power grids need to be improved and modernized to accommodate the resulting increases in electricity demand.

We must eliminate or minimize leaks from natural gas infrastructure and refrigerant mechanical systems.

We must also increase natural sequestration of carbon dioxide as well as develop technologies to pull carbon out of the atmosphere and store it safely.

What is Carbon Sequestration?

Nature absorbs carbon dioxide through processes such as photosynthesis; trees, plants, and wetlands draw CO2 from the atmosphere and use it as a nutrient for growth. Geologic formations and soils also absorb and store carbon dioxide. 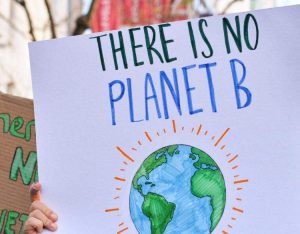 What is the World doing to Address Climate Change?

The 2015 Paris Climate Agreement is an international treaty on climate change that set a goal of limiting global temperature rise to no more than 2.0 degrees C over pre-industrial levels. The United Nations Intergovernmental Panel on Climate Change (IPCC) has since recommended a goal of 1.5 degrees C. The Paris Agreement has been ratified by 190 countries as of January 2021, and each country is required to develop and publish goals and plans for reducing greenhouse gas emissions.

Why Should the U.S. Invest in Combatting Climate Change?

The United States has historically been the largest emitter of CO2 in the world, only recently overtaken by China, and we continue to emit more per capita than China.  Much of U.S. manufacturing has now been outsourced to China and other developing countries, yet we continue to import and use the products now contributing to these countries’ emissions totals.  As consumers, we therefore bear responsibility for at least some of the developing world’s total emissions. Also, since CO2 remains in the atmosphere for hundreds of years, much of the existing total came from U.S. production of goods in the earlier days since the Industrial Revolution.

Climate change is a worldwide problem and requires worldwide cooperation to solve. The United States, as the wealthiest nation in the world, must do its part to help lead this worldwide effort to combat climate change.

The U.S. also needs to spearhead the development of research and new technologies to maintain its competitiveness in the evolving and emerging renewable energy industries as the world pivots away from fossil fuel based energy sources.

What Is the Commonwealth of Massachusetts Doing to Address Climate Change?

Within the United States, Massachusetts has been a leader in legislation to combat climate change and has committed to reducing carbon emission to net-zero by 2050. The state Energy and Environmental Agency published in December 2020 the results of a two-year, comprehensive analysis of pathways to reduce carbon emissions (Massachusetts 2050 Decarbonization Roadmap) and a corresponding Clean Energy & Climate Plan to achieve interim goals for the next 10 years. The State Legislature is also crafting comprehensive legislation to set carbon emissions targets and reduction strategies and priorities to meet the 2050 goal.

What is meant by Net-Zero Carbon Emissions?

Not all carbon emissions can be eliminated in the near future. Cement production and wastewater treatment plants, for example, cannot easily be switched to clean energy, and natural gas may be needed for backup during peak electrical demand. Some emissions will continue and must therefore be offset by sequestration, such as tree planting. The point at which sequestration offsets emissions equals net-zero. Purchase of carbon credits can also be used to offset emissions.

What Can You Do as an Individual to Help Slow Climate Change?

These are just some of the actions you can take to reduce your carbon footprint:

“The test of the morality of a society is what it does for its children”, 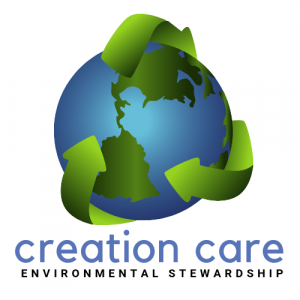