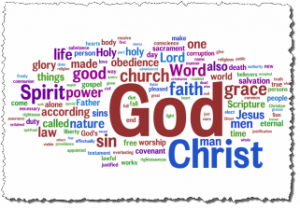 (Some parts of scripture are stories that were told and retold over many, many years and eventually written down by those with no firsthand knowledge of the events. Notice in this passage that it’s written by an eyewitness, Peter.)

For we did not follow cleverly devised myths when we made known to you the power and coming of our Lord Jesus Christ, but we had been eyewitnesses of his majesty. For he received honor and glory from God the Father when that voice was conveyed to him by the Majestic Glory, saying, “This is my Son, my Beloved,[a] with whom I am well pleased.”  We ourselves heard this voice come from heaven, while we were with him on the holy mountain.

Simeon Peter, a servant and apostle of Jesus Christ,

To those who have received a faith as precious as ours through the righteousness of our God and Savior Jesus Christ:

May grace and peace be yours in abundance in the knowledge of God and of Jesus our Lord.

His divine power has given us everything needed for life and godliness, through the knowledge of him who called us by his own glory and goodness.  Thus he has given us, through these things, his precious and very great promises, so that through them you may escape from the corruption that is in the world because of lust, and may become participants of the divine nature.  For this very reason, you must make every effort to support your faith with goodness, and goodness with knowledge, and knowledge with self-control, and self-control with endurance, and endurance with godliness,  and godliness with mutual affection, and mutual affection with love.  For if these things are yours and are increasing among you, they keep you from being ineffective and unfruitful in the knowledge of our Lord Jesus Christ.

A few years ago I read Stephen Prothero’s book, Religious Literacy: What Every American Needs to Know – and Doesn’t. Prothero is the chair of the religion dept. at Boston University. I found his book interesting, inspiring and depressing!  Prothero begins many of his classes by giving his students a little quiz on the first day of class. I’d like you to take part of that quiz right now. Here it is:

Here are the answers:

Abraham       First of the Patriarchs

Prothero cites some other surveys in his book:
– only half of adults can name even one of the four Gospels.
– most Americans cannot name the first book of the Bible.
– most do not know that the story of Jonah is in the Bible.
– 10% of Americans believe that Joan of Arc was Noah’s wife.
Thus the need for Christian Literacy!

Literacy refers to the ability to use a language – to know what words means, to be able to converse in that language.  (Prothero, p. 11)   To read, write and speak is to be literate.

We need to be Literate Christians, able to speak about our faith.

In 1987 E.D. Hirsch wrote a best-selling book called, Cultural Literacy. Hirsch argued the modern trend in education away from content-based learning and towards skill-based learning had produced a “disintegration of cultural memory.”  Education moved away from rote memorization, from just piling up facts, but the result is we don’t know much.

For example, we all know the slogan, “Remember the Alamo,” but few people actually know what went on at the Alamo that’s worth remembering.

Hirsh called for a return to what he termed, “core knowledge.” He said that without this “core knowledge” we can’t really have intelligent conversations and make informed decisions.  We’re adrift in the ocean, not knowing where we’ve come from, so we can’t possibly know where we’re going.

Religious literacy means having the ability to understand and speak about our faith intelligently. It’s the ability to communicate the basic tenants of our religion

It’s understanding the meaning of such words as Covenant, Atonement, Incarnation & Trinity.

It’s knowing that Christ was not his last name but a title.

It’s knowing the 10 Commandments, being familiar with the Sermon on the Mount, the Parables, and the events of Holy Week.

It’s understanding Paul’s doctrine of Grace (that we are saved by grace and not works) and James’ doctrine that “faith without works is dead.”

It’s knowing that Jeremiah was a prophet, not a bullfrog, and it’s knowing what the job of the prophets was in ancient Israel.

Christian Literacy is knowing that St. Paul & St. Luke were not part of the original 12 disciples, but they were instrumental in the spread of early Christianity and prolific writers of books that ended up in the New Testament.

There is a basic core knowledge that is essential for us all to have. Prothero makes the case that when it comes to religion Americans are a paradox – “we as a people are both deeply religious and profoundly ignorant about religion at the same time.”  This is troubling, says Prothero, because . . .

One can’t understand current events in our nation and world without understanding religion!

After we toppled Saddam Hussein, a violent civil war broke out in Iraq between Sunni & Shiite Muslims. Our government wasn’t prepared for this. We were caught off guard, and it demonstrated a lack of religious literacy.

Why do Sunni Muslims and Shiite Muslims not get along?

Now before we get uppity about this we should remember that we Christians have done our share of killing heretics and witches through the years as well.  Look at the assault on the Capitol Building. Some felt it was their duty to God, Country, Trump, and Jesus, to hang Mike Pence.

4. I read something chilling about the Proud Boys at the assault on the Capitol. You’ve heard about them (that’s the group that President Trump famously told to “Stand down and Stand by”), and you probably know that they were some of the ones in tactical combat gear on Jan. 6. What I discovered this week is that before they stormed the building they prayed!

They believed that Donald Trump & Jesus had called them there to do what they had to do to, “take this country back.”

Now how does that happen? In what world does that make sense?

To answer that you have to know something about the history of Fundamentalism in this county – and how it has aligned itself with White Supremacy, as well as with the view that we were founded as a Christian nation instead of a pluralistic nation with freedom of religion and tolerant of different religions. They’ve made this mistake by confusing the intent of the Puritans of the 1600’s with the Founding Fathers of the 1700’s. The Puritans did indeed come here to establish a Christian nation, a “city set on a hill,” and this made them intolerant of people of other faiths (they sent them off to Rhode Island!).

The Founding Fathers were different. Some were indeed Christian, but several of them were Deists, some were Unitarian, and some had no religion at all. But most importantly, they founded a country based on freedom of religion. Fundamentalism often seems to conveniently forget this.

5. You can’t understand the conflict between the Palestinians and Israelis without understanding the Biblical concept of Covenant, and that the book of Genesis promises the land to Abraham & his family (this Covenant was passed down through Isaac, Jacob and Moses, etc.). They got the land on good authority.

Of course, Genesis 12 also talks about being “blessed to be a blessing,” so perhaps it’s meant to be shared!

So, do you see how an informed citizen needs to know something about religion?

We need to know something about the religions of the world not only to be truly educated people, but also to be effective, informed citizens.

St. Peter believed that we should seek Christian literacy.

Support your faith . . . with knowledge.

Support your faith with study, with growth, with teaching, with learning more about your faith.

We usually define the word, disciple as a follower. But there’s another meaning to the word, isn’t there? Student. A disciple is a student, a learner, a pupil of Jesus.

So this Lent we’re embarking on a “Christian Literacy Project.”  Through the Lenten Devotional, as well as twice a week emails & via sermons, we’re going to strive to increase our religious IQ’s, to enhance our basic core knowledge of our faith. I hope you’ll come along for the journey.

Support your faith . . . with knowledge.